AleaSoft Energy Forecasting, October 18, 2021. During the second week of October, prices of several European markets fell compared to those of the previous week, favoured by the decrease in gas and CO2 prices and the increase in wind energy production in some markets during this period. Even so, price levels in electricity markets continue to be high, with weekly averages exceeding €150/MWh in almost all cases and €245/MWh in the case of the United Kingdom.

The solar energy production increased by 24% in the Italian market during the week of October 11 compared to the production of the previous week, and 8.0% in the French market. However, in the Iberian and German markets, the production was 12% and 22% lower, respectively.

For the week of October 18 to 24, the AleaSoft Energy Forecasting’s solar energy production forecasting indicates that it will decrease in the Italian market, while a slight recovery is expected in the German and Spanish markets. 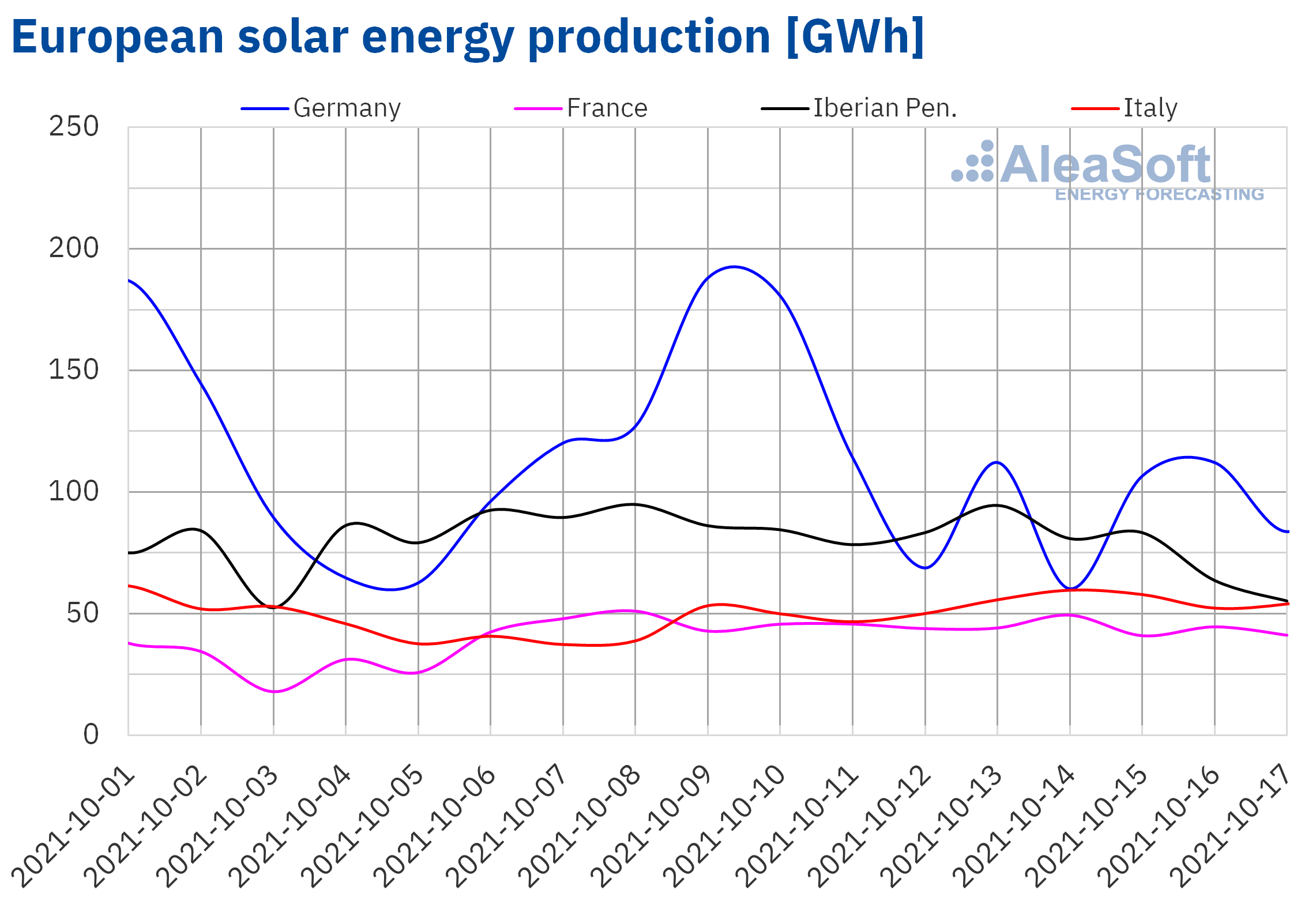 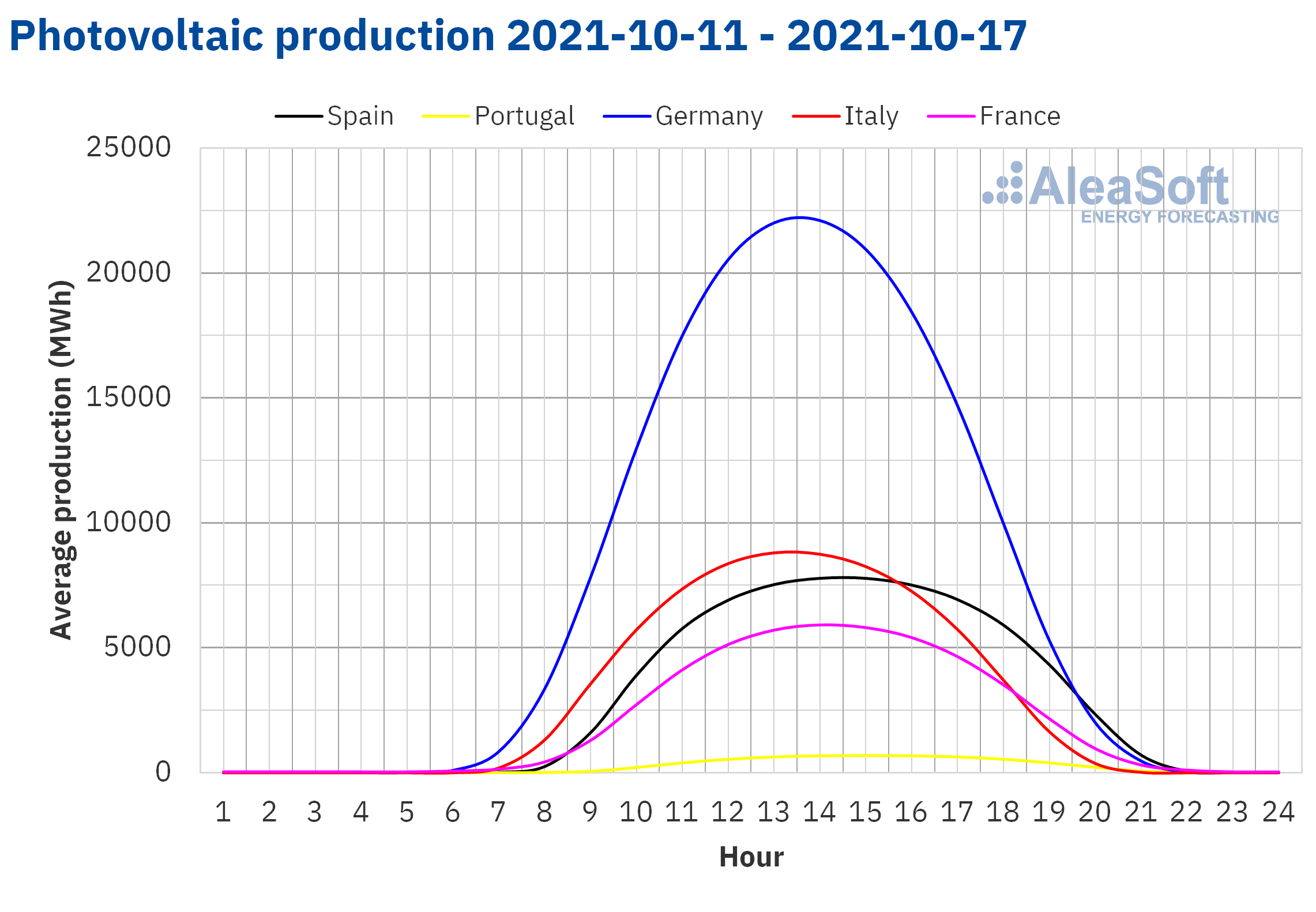 For the third week of October, the AleaSoft Energy Forecasting’s wind energy production forecasting points to an increase in all markets except in the Italian one. 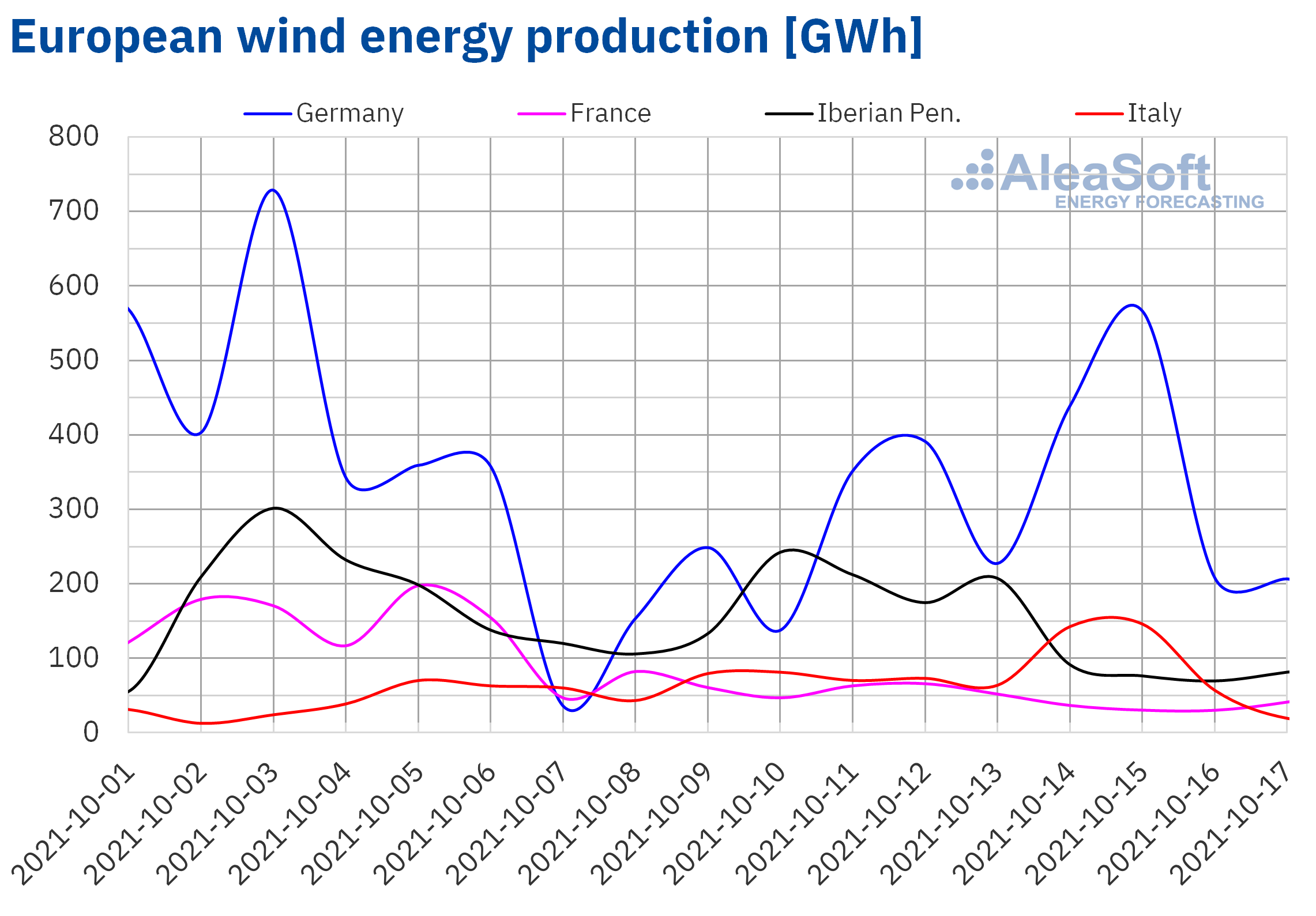 In the week of October 11, average temperatures fell compared to those of the previous week in most of the European markets analysed by AleaSoft Energy Forecasting. This led to an increase in electricity demand in most markets if the values registered during those two weeks are compared. The largest increase was registered in the French market, which was 6.5%. The markets of Belgium, the Netherlands, Portugal and Great Britain also registered increases of over 3.0%. In the case of Spain, where Hispanic Day was celebrated on October 12, the demand fell by 3.9%. According to the estimates made by AleaSoft Energy Forecasting, if the effect of this holiday is corrected, the demand is at a similar level to that of the week that began on October 4.

According to AleaSoft Energy Forecasting’s forecasts, in the week of October 18, the electricity demand will increase in the markets of Spain, Portugal, Great Britain and the Netherlands, because temperatures are expected to drop. In the rest of the markets, temperatures will rise and the demand will be similar or lower than that registered in the week of October 11. 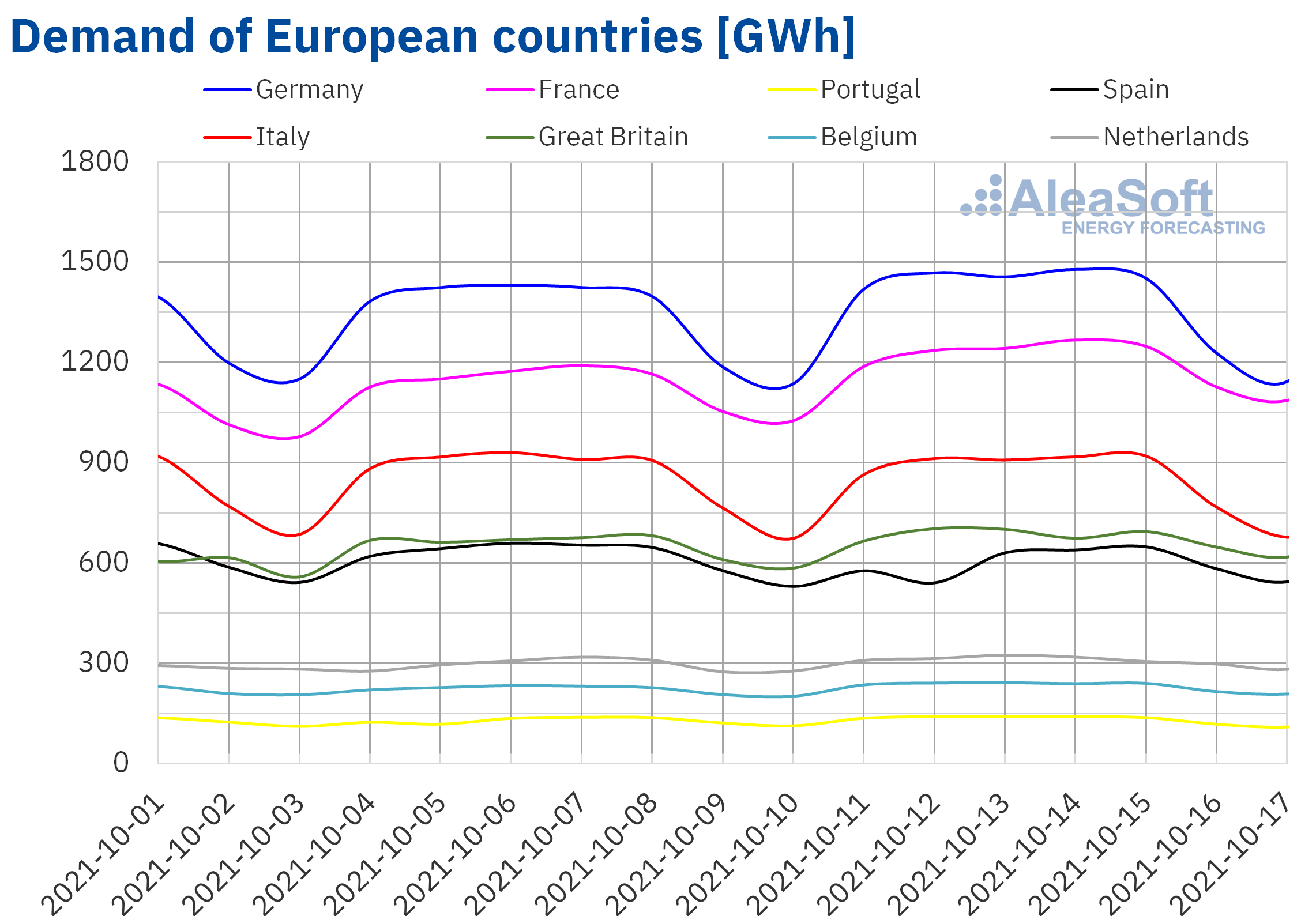 During the second week of October, the increase in wind energy production in countries such as Germany and Italy favoured price declines. In the case of the Spanish market, the fall in demand due to the October 12 holiday also exerted its downward influence on electricity prices. In addition, gas and CO2 prices fell compared to those of the previous week, leading to lower electricity markets prices. 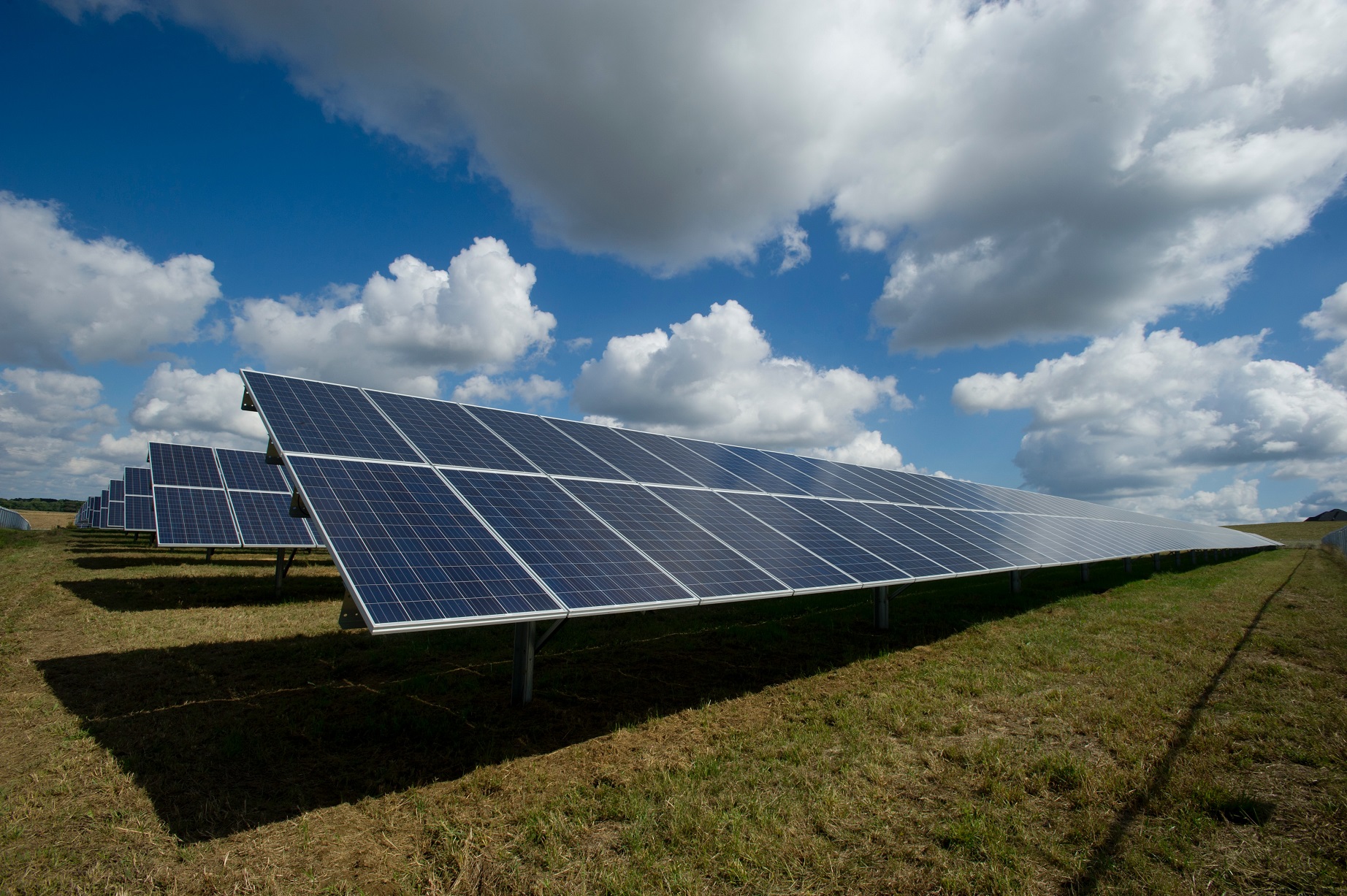 The AleaSoft Energy Forecasting’s price forecasting indicates that in the week of October 18, prices might fall in most markets, influenced by the general increase in wind energy production. However, in Italy, where a decrease in production with this technology is expected, the price might increase. Price increases are also expected in the MIBEL market despite the increase in renewable energy production in the Iberian Peninsula. This increase will be favoured by the stoppage to recharge of the Ascó I nuclear power plant. 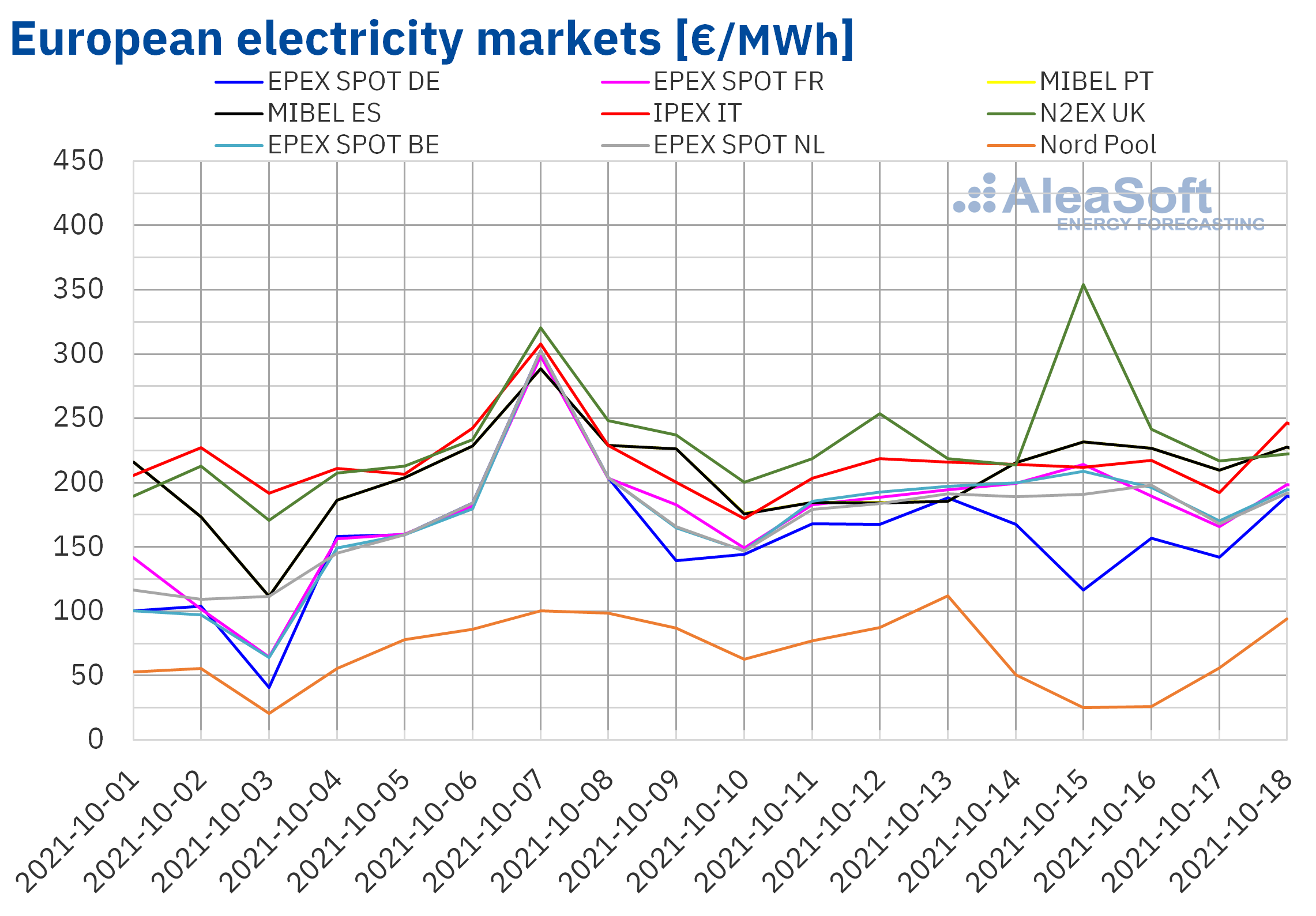 During the second week of October, electricity futures prices for the first quarter of 2022 registered increases in almost all the European electricity markets analysed at AleaSoft Energy Forecasting. The exceptions were the ICE and NASDAQ markets of the Nordic countries, in which declines were registered if the settlement prices of the sessions of October 8 and 15 are compared, of 2.5% and 3.4% respectively. In the rest of the markets, increases were between the 1.2% registered in the EEX market of the United Kingdom and 11% of the EEX market of France.

Regarding the product of the next year, 2022, a similar situation was observed. The markets of the Nordic countries registered falls of 5.2% in the case of the ICE market and 6.1% in the NASDAQ market. Meanwhile, the EEX market of France registered an increase of 12%, closely followed by the EEX market of Italy, Germany and Spain and the OMIP market of Spain and Portugal. The market in which prices registered the lowest increase was once again the EEX of the United Kingdom, in this case with a 5.7% increase.

Brent oil futures prices for the Front‑Month in the ICE market, during the second week of October, remained above $83/bbl. The maximum settlement price of the week, of $84.86/bbl, was reached on Friday, October 15. This price was 3.0% higher than that of the previous Friday and the highest since October 2018. But in the session of Monday, October 18, these futures were traded above $85/bbl.

As for TTF gas futures prices in the ICE market for the Front‑Month, on Monday, October 11, they continued with the decreases of the last days of the first week of October, but as of Tuesday, October 12, prices began to recover. On Thursday, October 14, the highest settlement price of the week, of €102.17/MWh, was reached. This price was 5.8% higher than that of the previous Thursday, but more than €13/MWh lower than the historical record of €116.02/MWh reached on Tuesday, October 5.

Regarding the settlement prices of the CO2 emission rights futures in the EEX market for the reference contract of December 2021, almost the entire second week of October remained below €60/t. The only exception was on Thursday, October 14, when a settlement price of €61.44/t was reached. 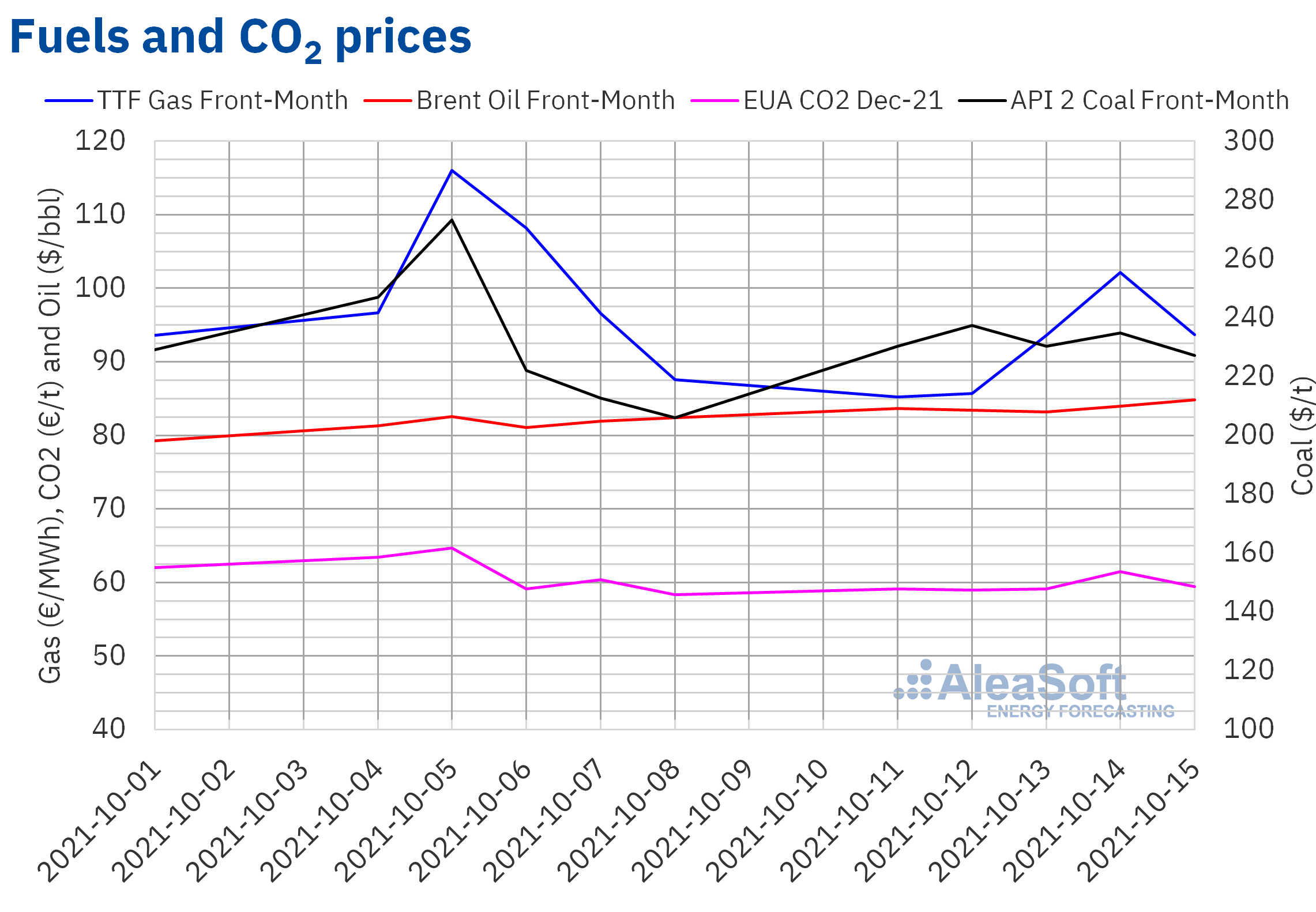 The analysis of the evolution of the European energy markets is one of the topics of AleaSoft Energy Forecasting’s monthly webinars. The last one, held on October 7, also analysed the current state of the renewable energy projects financing and the importance of the forecasting in audits and portfolio valuation with two invited speakers from Deloitte Spain. Deloitte Spain and AleaSoft Energy Forecasting clients can request the recording here.

The next webinar organised by AleaSoft Energy Forecasting will be held on November 11, this time with the participation of invited speakers from Engie Spain. In it, the renewable energy projects financing will continue to be discussed and the analysis of the evolution of European energy markets will be updated.

Antonio Delgado Rigal, CEO of AleaSoft Energy Forecasting, will participate on Wednesday, October 20, at 5:45 p.m. in the analysis table on financing that will be held within the framework of the VIII Solar Forum of the UNEF. This table will analyse whether recent regulatory changes led to a worsening in financing conditions for photovoltaic energy projects and whether under current conditions the projects to the market continue to be bankable.