Project Finance: how to mitigate the market prices risk

AleaSoft, November 4, 2020. A PPA contract is the meeting point between producer and offtaker on the vision of the electricity market prices future. The market prices risk is the most difficult to assume when financing renewable energy projects, and tools such as PPAs seek to mitigate it in whole or in part. This article summarises some of the topics covered in the webinar organised by AleaSoft with the participation of Deloitte.

In a previous article, the conclusions on the need to have a “proper and educated vision” of the future of the market as input to a robust financial model to finance a renewable energy project, from the webinar “Energy markets in the recovery from the economic crisis” organised by AleaSoft, were summarised. The webinar took place on Thursday, October 29, and was attended by two speakers from the consulting firm Deloitte, Pablo Castillo Lekuona, Senior Manager of Global IFRS & Offerings Services and Carlos Milans del Bosch, Partner of Financial Advisory, in addition to Oriol Saltó i Bauzà, Data Analysis and Modelling Manager at AleaSoft. At the analysis table after the presentations of the Spanish version of the webinar, Antonio Delgado Rigal, CEO of AleaSoft and Jaume Pujol Benet, also Partner of Financial Advisory at Deloitte, joined.

The market prices risk in the financing of renewable energy projects

As commented in the first part of the summary, the market prices risk is the most complex to assume in a framework where the projects without aid or feed‑in tariff schemes represent a large part of the new projects that enter the mix of electricity generation. The risk of volume of production can be greatly limited if there are reliable forecasts of wind or photovoltaic energy production that can safely establish minimum volumes that can be achieved in 90% of cases, known as P90, as it is the 90th percentile of the production forecast for a given project. 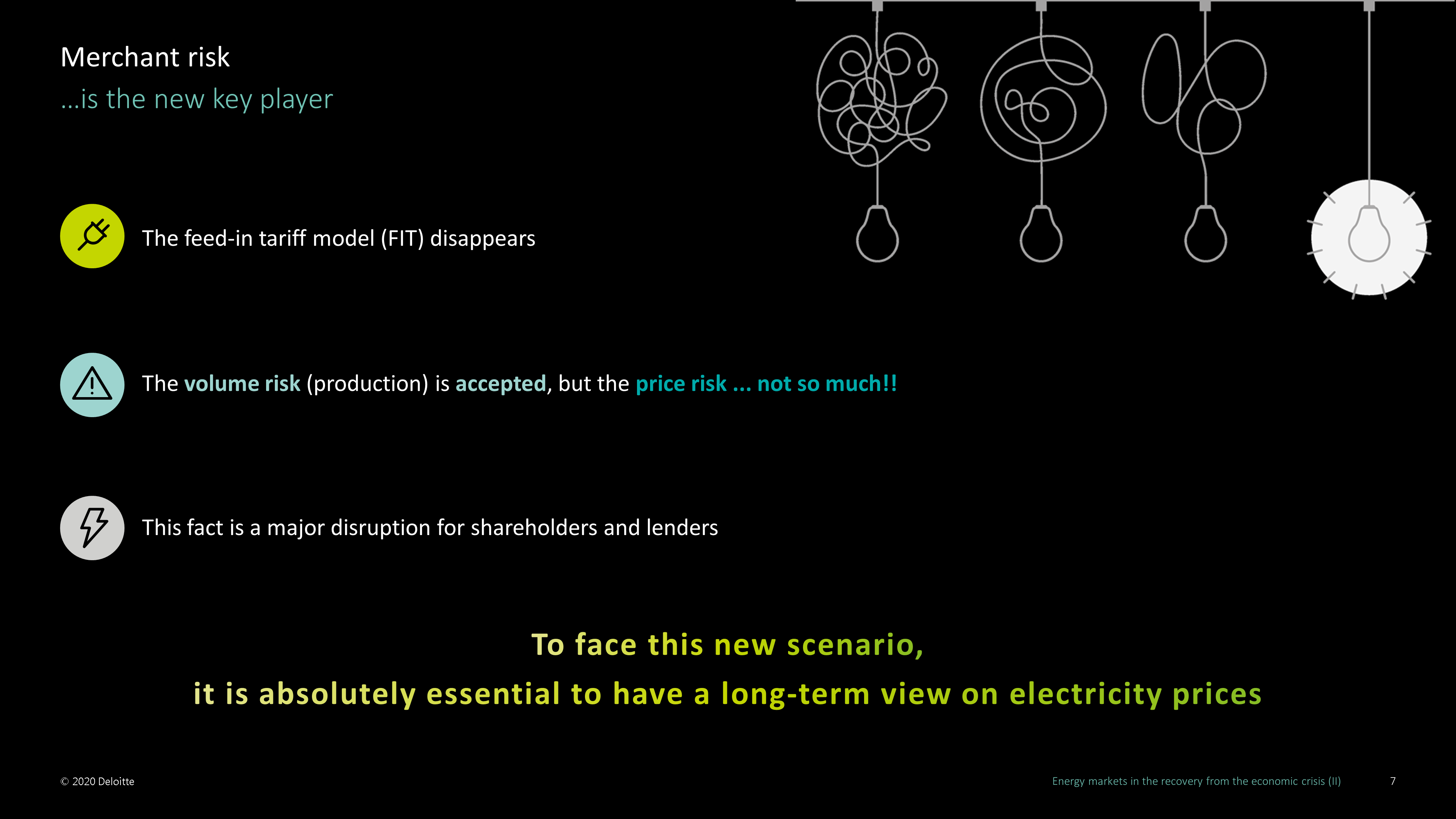 But the market prices risk is still relatively new in this area of Project Finance of the renewable energy facilities projects. The different views that the developers and the lender may have of the future of the market make it necessary to adopt measures that mitigate the market prices risk, either by reducing it or eliminating it completely. The PPAs, Power Purchase Agreements, are a very generalised tool for this.

The PPAs as a risk management tool

The PPAs allow reducing or eliminating, depending on their structure, the risk that the fluctuations in the electricity market prices put on the expected profitability of a project. The PPAs are complex contracts tailored to practically each particular project, and where the purchase price of the energy is only a small part of the long list of chapters that it consists of.

The purchase and sale price of the energy can take very varied structures. Among the most common are the swaps, where, basically, a fixed price is established, or the floor structures, where a minimum price plus a premium is set. From here, different structures can be designed including also a cap or a maximum price, or combining swaps and floor throughout the duration of the contract. According to Deloitte, this last structure is one of those that offer more advantages when it comes to being eligible for a project financing with better conditions.

When negotiating a value and a structure for the price in a PPA, it is important to have long‑term market prices forecasting that provides confidence bands with a probabilistic metric that allow safely determining the risk associated with assuming a given market price in the future.

During the webinar, the experts highlighted that this probabilistic metric of the confidence bands is one of the most important characteristics in a long‑term prices forecasting, along with the hourly granularity that, as commented in the first part of the webinar summary, is necessary for estimating the prices captured by the photovoltaic and wind energy and the profitability of the project. In the case of the AleaSoft‘s prices curves forecasting reports with a 30‑year horizon, both premises, fundamental and differentiating with respect to other reports, are met: hourly breakdown and confidence bands with a probabilistic metric.

Once again, as happened in previous webinars organised by AleaSoft or by the APPA, or in the UNEF Solar Forum, the hydrogen had prominence due to the strategic nature that it will have in the energy transition. Although it was clear that, right now, a hybrid project of renewable power plant with the possibility of green hydrogen production is not profitable, unless it has aid or subsidies, or if it is a very specific case where the produced hydrogen has a high value, either because of the location or the use to which it will be put.

Next webinar of AleaSoft

Continuing with the information work during the economic crisis, at AleaSoft an upcoming webinar is being prepared that will take place on November 26, as always in English, at 10:00 CET, and in Spanish, at 12:00 CET. This webinar will be the first of a new series “Prospects for the energy markets in Europe from 2021” that will have at least two parts, the second being in January 2021.

In this webinar, which will be the last of this year 2020 and is practically on the threshold of the year 2021, the behaviour of the energy markets in Europe during these last months of economic crisis will be analysed, also with a historical perspective, and a vision of what the year 2021 and beyond can bring will be shown. In addition to the energy markets, it will also delve into the needs of investment and financing of the renewable energy projects, their recent evolution and their prospects for the following years.