AleaSoft, July 23, 2020. The prices of most European electricity markets fell in the fourth week of July due to the increase in wind and solar energy production, registering daily values lower than €35/MWh in general. However, in the MIBEL and IPEX markets, the prices rose and were close to €40/MWh as renewable energy production fell. The Brent was above $44/bbl, something that did not happen since the beginning of March. The gas was quoted below €5/MWh, close to the lows of late May.

The solar energy production decreased by 12% in the Iberian Peninsula during the period between Monday, July 20, and Wednesday, July 22, compared to the average of the previous week, the number 29 of 2020. In contrast, in the German market it increased by 18%, while in the French and the Italian the increase was 11% and 9.4% respectively.

In the 22 elapsed days of July, the solar energy production was higher in all the markets analysed at AleaSoft compared to the same period of 2019. The greatest growth was registered in the Iberian Peninsula, where it increased by 59%. In the rest of the analysed markets, the increase in production was between 5.0% and 14%.

The analysis carried out at AleaSoft indicates that by the end of the week number 30 of the year the solar energy production in the markets of Italy and Germany will be higher than that registered during the week of July 13. 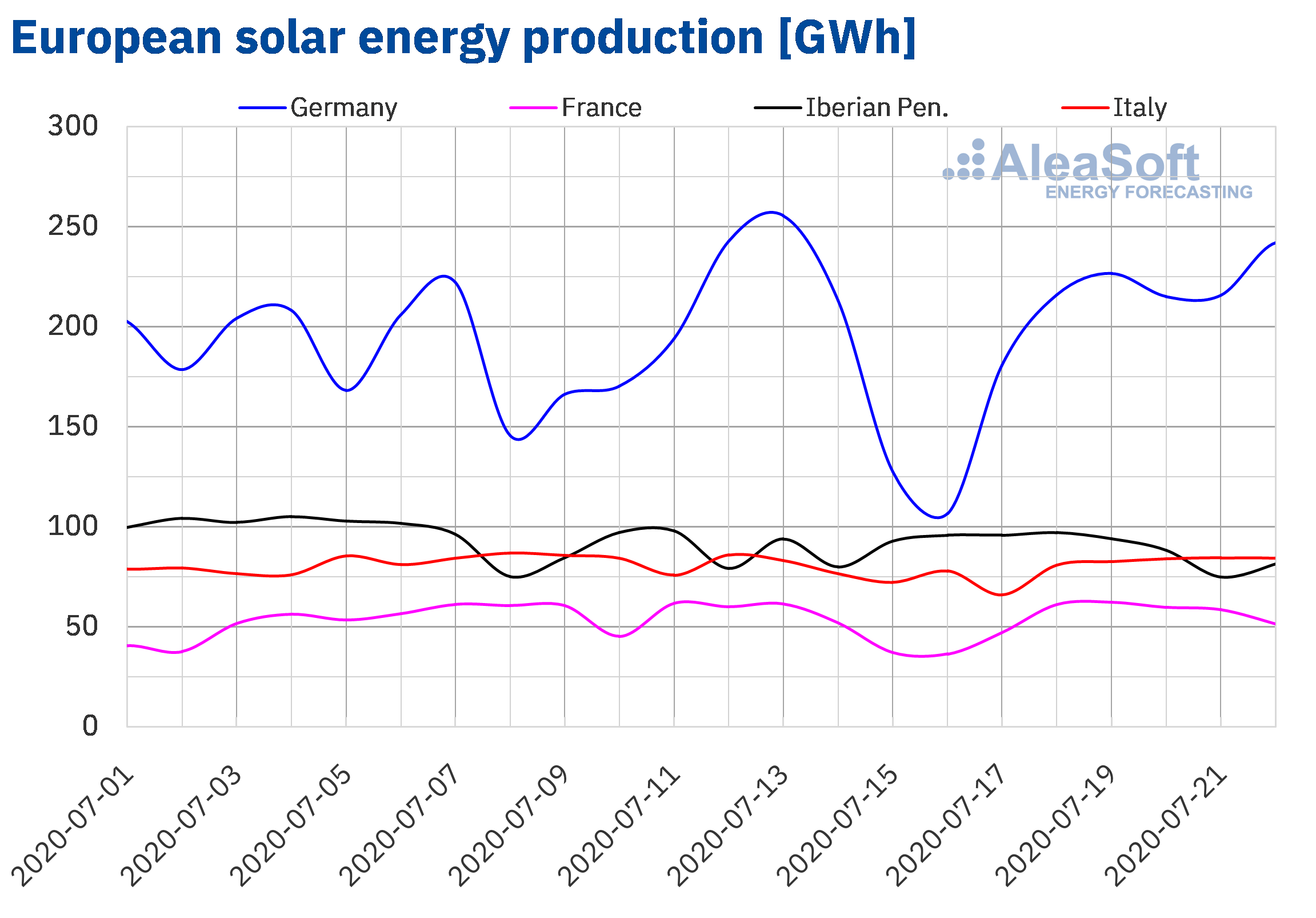 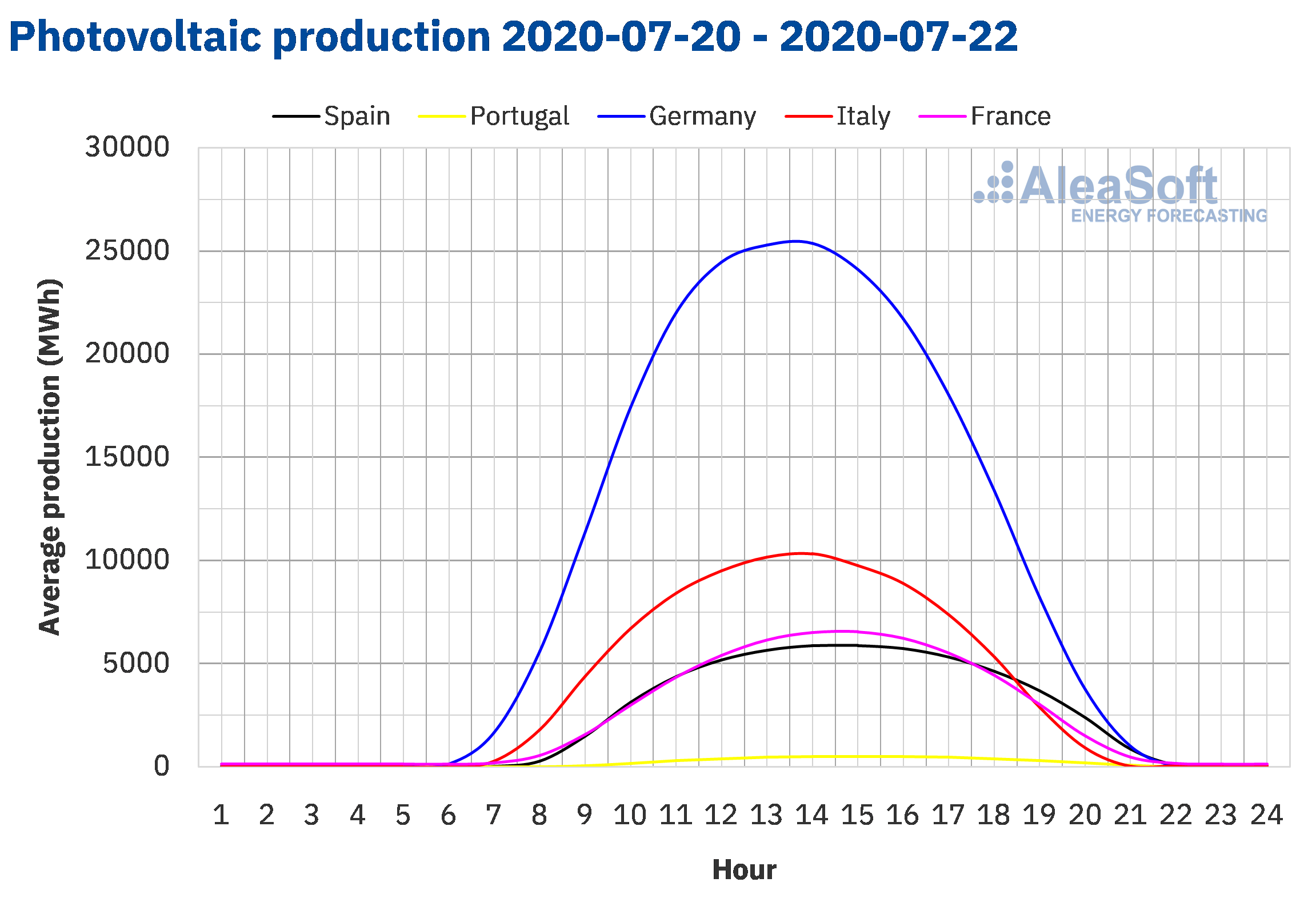 The average wind energy production for the first three days of the fourth week of July increased by 90% in the German market and by 59% in the French market compared to the average of the third week. On the contrary, in the Iberian Peninsula and Italy it decreased by 29% and 38% respectively.

Until Wednesday, July 22, the wind energy production was higher than that of the same days of July 2019 in most of the markets analysed at AleaSoft. The greatest increase was that of the Iberian Peninsula, of 43%. In the French market it increased by 35% and in the Italian by 2.7%. On the contrary, in the German market the production with this technology decreased by 4.6%. 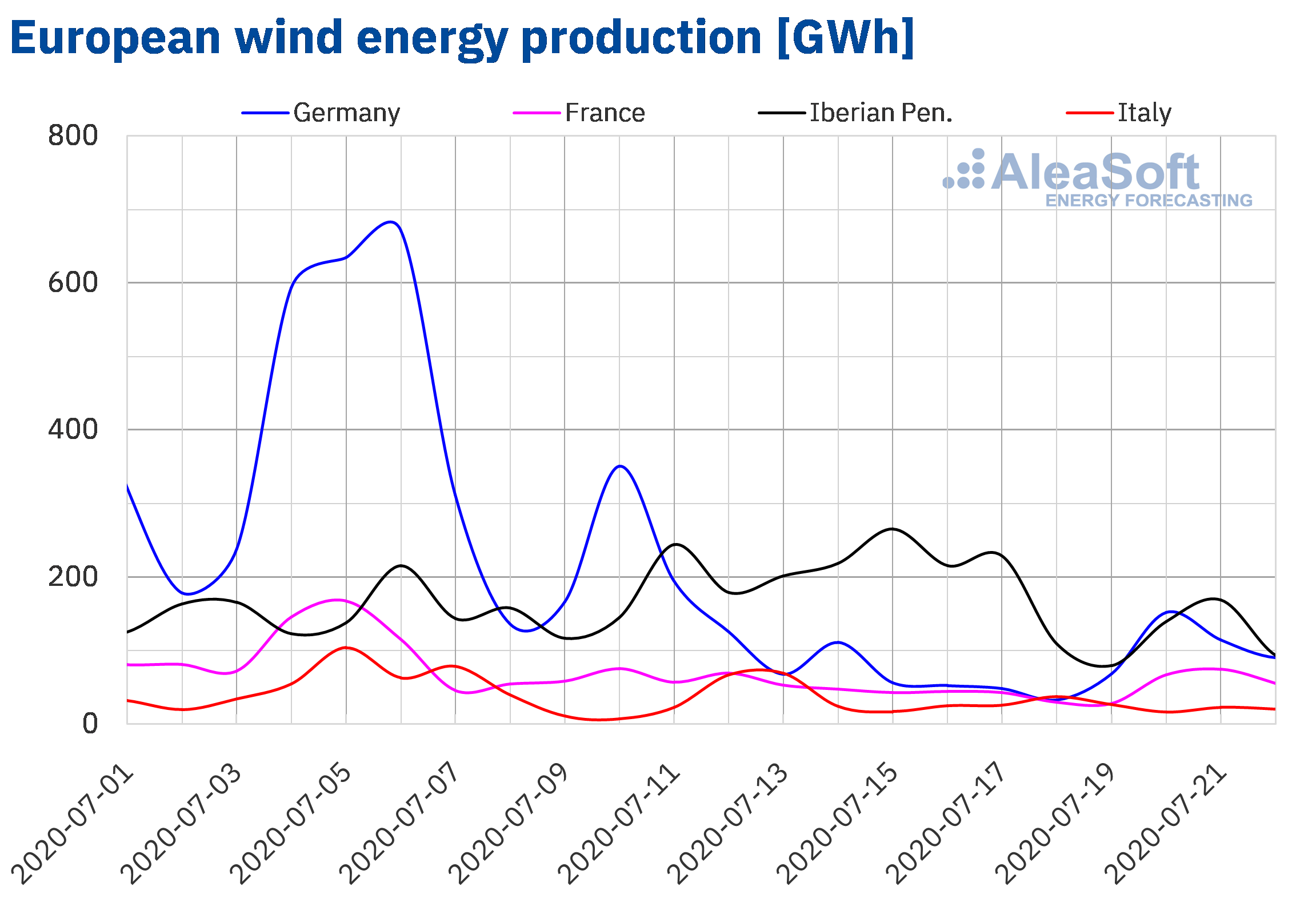 From Monday to Wednesday of the week of July 20, most markets in Europe registered increases in electricity demand compared to the same days of the week of July 13. In France there was a recovery of 8.3% due to the effect of the holiday of Tuesday, July 14, National Day of France, which lowered the demand of the previous week. Correcting the effect of the holiday, the increase was 1.2%. Other significant increases in demand were those of Spain and Italy, of 3.1% and 4.8% respectively. In the Portuguese market, the demand increased slightly by 0.3%.

On the other hand, in the Belgian market, the demand fell by 11% due to the holiday of Tuesday, July 21, National Holiday of Belgium. Once the effect of the holiday was corrected, the fall in demand was 3.5%. Other markets where the demand fell in this period were those of Great Britain, the Netherlands and Germany, with decreases of 4.0%, 3.4% and 1.6% respectively.

At the AleaSoft’s observatories, it is possible to see both the uptick in the demand of France and the drop in the demand of Belgium. In this tool, other variables of interest of the main European electricity markets are available.

According to the AleaSoft’s electricity demand forecasting, at the end of the week the demand will be lower than that registered during the week of July 13 in most markets, except for the markets of France and Spain, where it will be higher. 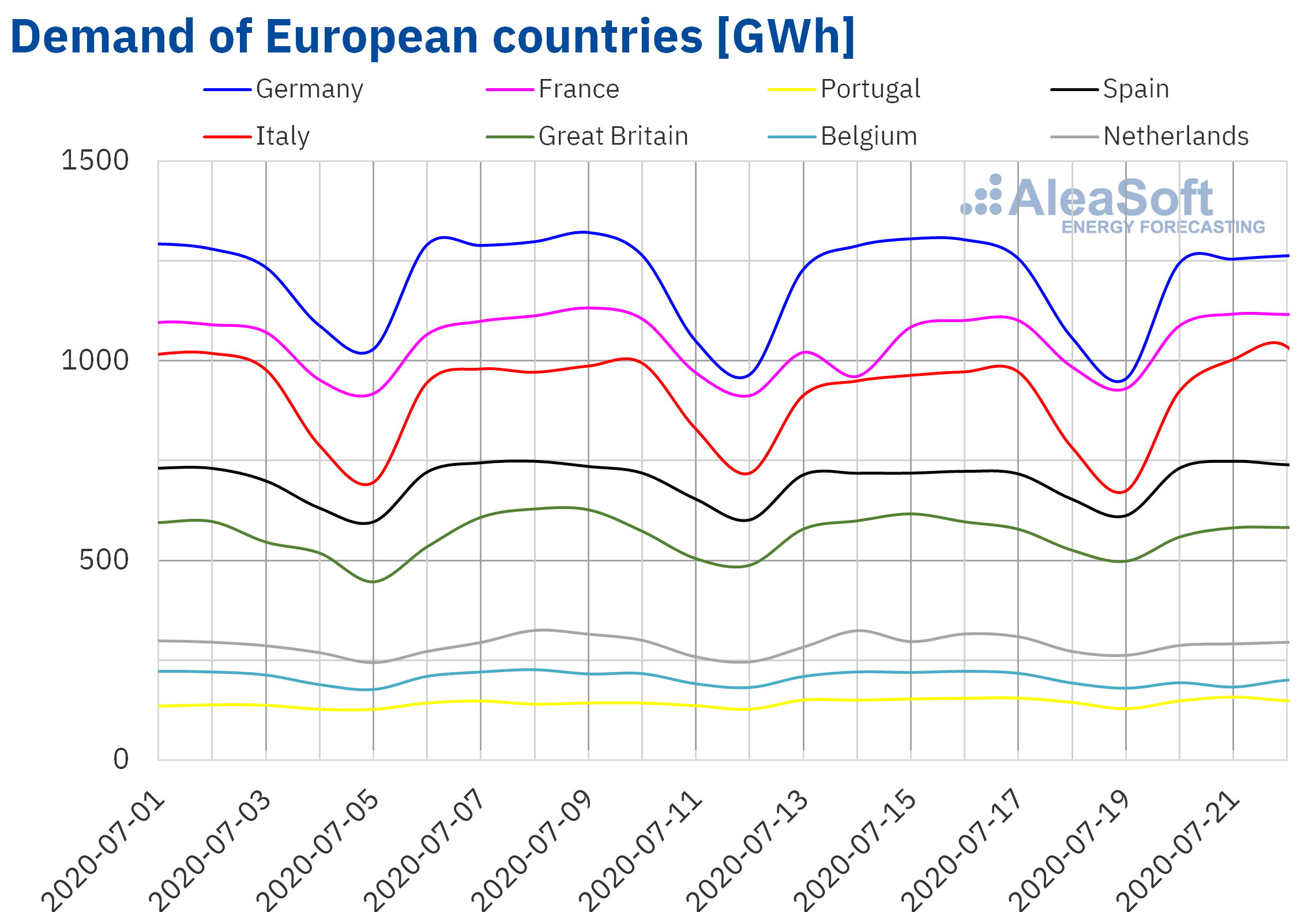 In Mainland Spain, the electricity demand increased by 3.1% from July 20 to 22 on a week‑on‑week basis. The main cause of this increase was the increase in average temperatures during this period by 1.3 °C. At AleaSoft it is expected that at the end of the week of July 20, the weekly demand will conclude above that of the third week of July.

The average of the solar energy production in Mainland Spain, which includes the photovoltaic and solar thermal technologies, decreased by 12% during the first three days of the week of July 20 compared to the average of the third week of July. In the year‑on‑year analysis of the production, during the first 22 days of July, an increase of 61% was registered. For the week 30, the analysis carried out at AleaSoft indicates that the production will decrease compared to the total registered the week of July 13.

The average level of the wind energy production in Mainland Spain in the first three days of the fourth week of July, decreased by 26% compared to the average of the week of July 13. In the year‑on‑year analysis, the wind energy production from July 1 to 22 was 46% higher. For the current week, which began on Monday, July 20, the analysis carried out at AleaSoft indicates that the production with this technology will be lower than that of the week 29 of 2020.

At the moment, all nuclear power plants are underway and the nuclear energy production maintains a level close to 167 GWh per day. 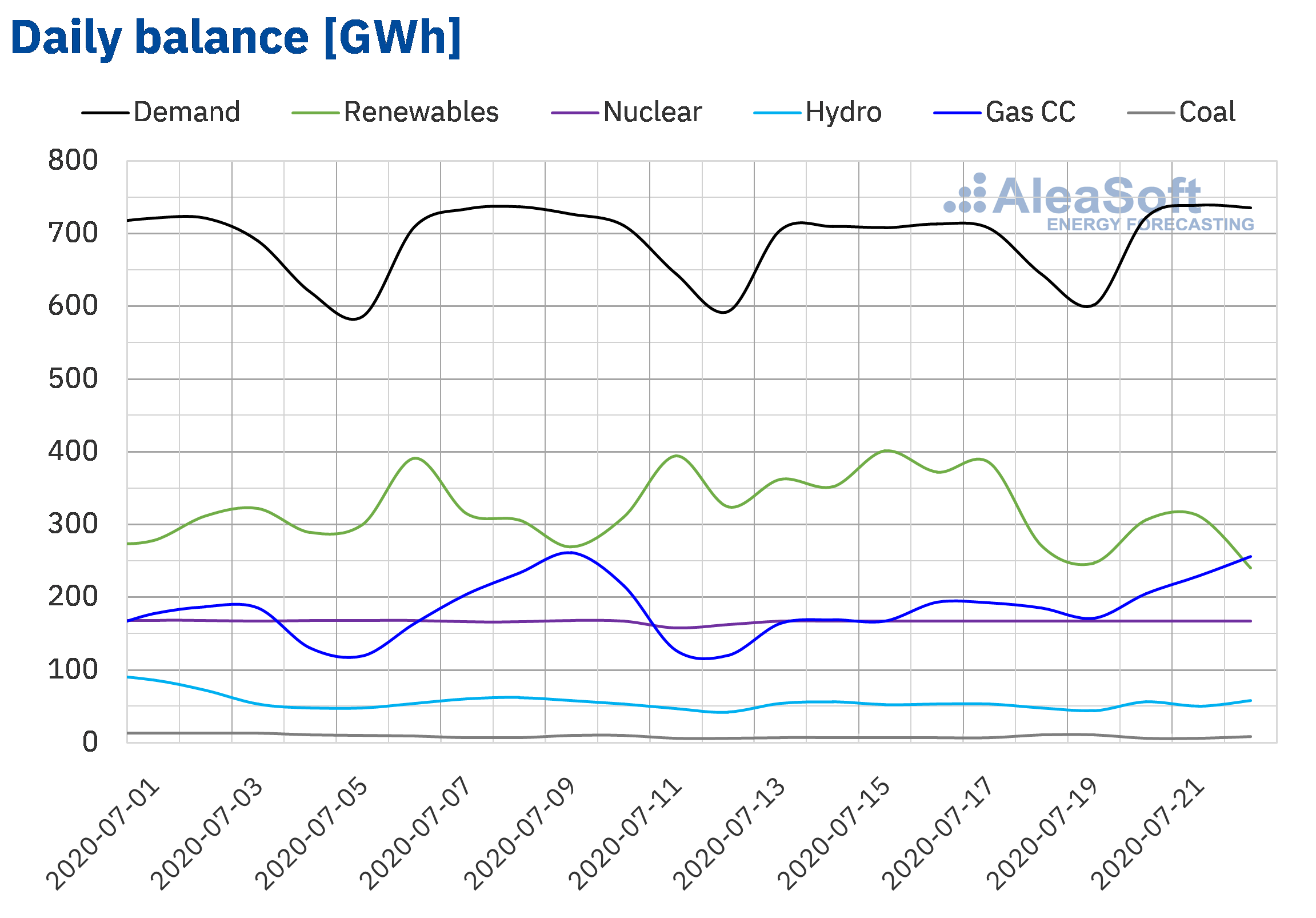 The hydroelectric reserves currently have 14 464 GWh stored, according to data from the Hydrological Bulletin of the Ministry for the Ecological Transition and the Demographic Challenge number 29, representing a decrease of 289 GWh compared to bulletin number 28.

In general, the average price for the first four days of the fourth week of July was above €30/MWh, with the exception of the Nord Pool market. This market reached the lowest average, of €2.40/MWh. The rest of the electricity markets had average prices between €30.18/MWh of the EPEX SPOT market of Belgium and €39.36/MWh of the IPEX market.

As for the daily prices of the analysed European electricity markets, on Thursday, July 23, there were daily prices above €42/MWh in the IPEX and MIBEL markets. The highest daily price was that of the Italian market, of €42.06/MWh. On Wednesday, July 22, the €40/MWh was also exceeded in the MIBEL market, with a price of €40.84/MWh. However, the prices in the rest of the markets generally remained below €35/MWh during the period from July 20 to 23. 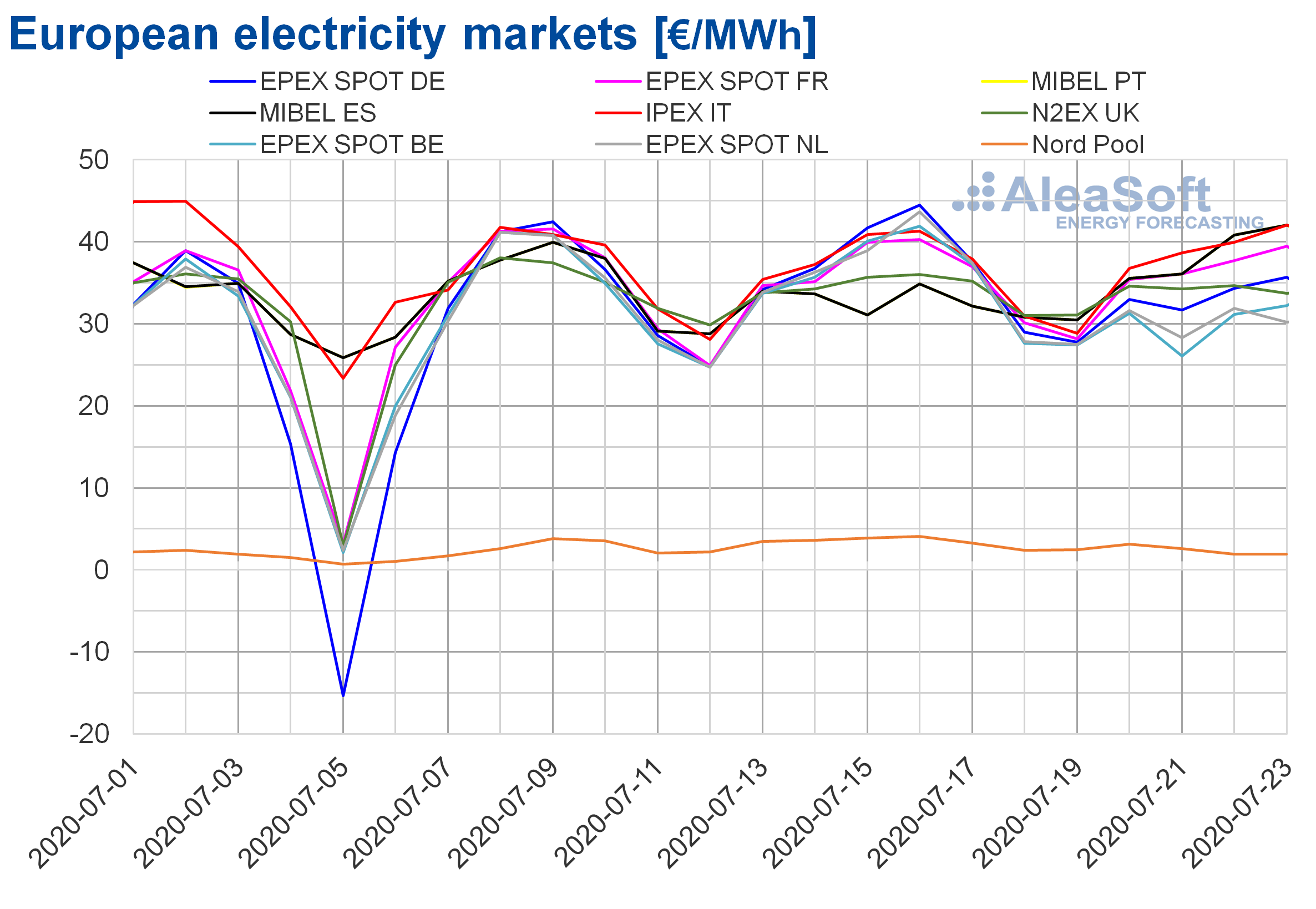 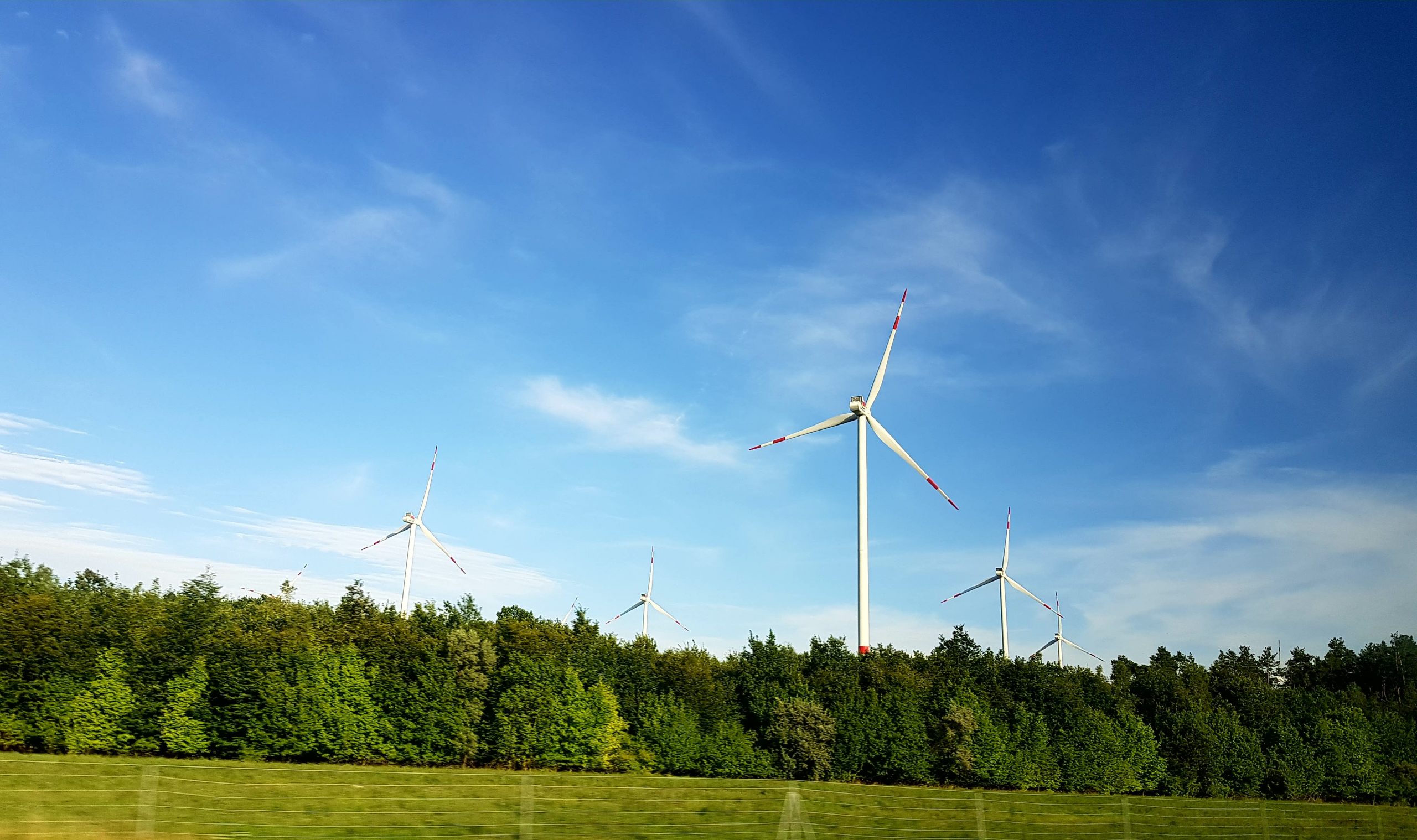 The AleaSoft’s price forecasting indicates that the week of July 27 will also start with price declines in most European markets. The exceptions will be the markets of Italy, Belgium and the Iberian. In the Iberian and Italian markets, the decrease in solar energy production will favour this behaviour.

Due to this increase, the average price from July 20 to 23, of €38.63/MWh, was the second highest in Europe, after that averaged in the Italian market. During the first four days, the daily prices of Spain and Portugal followed an upward trend until reaching a price of €42.04/MWh on Thursday, July 23. This daily price was the second highest after the one reached in the Italian market that same day, of €42.06/MWh.

During the considered period, the drop in wind and solar energy production in the Iberian Peninsula favoured the increase in prices in the MIBEL market of Spain and Portugal. The AleaSoft’s price forecasting indicates that the average price for the first four days of the week of July 27 will rise slightly due to an increase in demand combined with lower production with renewable energies.

In the elapsed days of the week until the session of Wednesday, July 22, there was a general fall in the electricity futures prices for the fourth quarter of 2020 compared to the session of Friday, July 17. The steepest decline, in percentage terms, was that of the ICE market of the Nordic countries, which was of 12%. However, in absolute terms, the collapse of €5.61/MWh in the EEX market of France was the most notable difference. In general, all markets registered declines of between 3.5% of the OMIP market of Spain and Portugal and 12% of the ICE market of the Nordic countries.

The electricity futures for the 2021 calendar year also registered declines between the settlement prices of the session of Wednesday, July 22, and those of the last session of the week of July 13. The EEX market of Spain was the one with the lowest variation, of ‑1.0%, while the rest of the markets registered falls of between 1.2% of the OMIP market of Spain and Portugal and 3.8% of the EEX market of Great Britain.

The Brent oil futures prices for the month of September 2020 in the ICE market, at the beginning of the fourth week of July, continued with their recovery, already reaching values above $44/bbl. On Tuesday, July 21, the maximum settlement price so far this week, of $44.32/bbl, was reached, which is the highest since the beginning of March.

In this context of price recovery, the OPEC+ agreed on Wednesday, July 15, to reduce its production cuts from August. The organisation anticipates that this increase in production will be offset by the increase in demand. However, the concern about the effects that the evolution of the COVID‑19 pandemic may have on the recovery of the demand is still present.

On the other hand, the TTF gas futures in the ICE market for the month of August 2020, the first days of the week number 30 of 2020, registered prices below €5/MWh, something that did not happen since June 1, and their values approached the lows registered at the end of May. On Monday, July 20, they started the week with the lowest settlement price after that registered on June 1, of €4.73/MWh. This was 7.4% lower than that of Monday, July 13. On Tuesday and Wednesday the prices increased slightly, to €4.83/MWh of Wednesday, July 22, which was still 7.6% lower than that of Wednesday, July 15.

Regarding the TTF gas prices in the spot market, the first days of the week of July 20, continued below €5/MWh. Despite increasing on Monday to €4.82/MWh, afterwards they began to fall. As a consequence, the index price of Thursday, July 23, was €4.61/MWh.

As for the API 2 coal futures prices in the ICE market for the month of August 2020, on Tuesday, July 21, and Wednesday, July 22, they recovered to exceed $50/t, which did not happen since July 8. The settlement price of Wednesday, July 22, of $51.15/t, was the highest of the last fifteen days. This recovery was favoured by the fears of supply problems due to the floods in China and the plans to reduce the production in Colombia.

Regarding the CO2 emission rights futures prices in the EEX market for the reference contract of December 2020, they remained below €27/t during the first days of the fourth week of July. On Monday, July 20, a settlement price of €26.18/t was reached. This was 11% lower than that of Monday, July 13, and the lowest since late June. But, subsequently, the prices recovered and the settlement price of Wednesday, July 22, was €26.64/t. 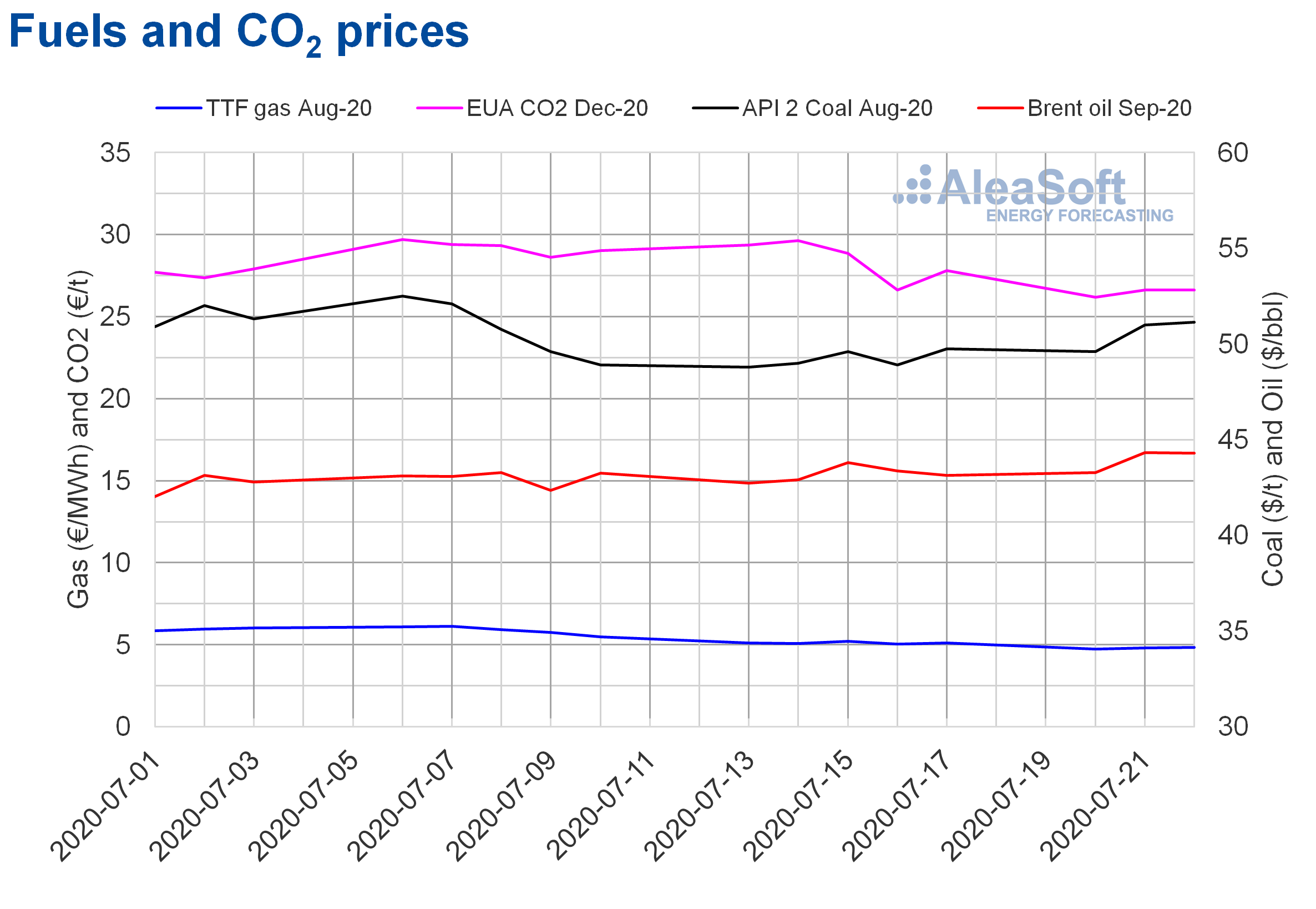 At AleaSoft the long‑term electricity markets prices forecasting was updated, taking into account the COVID‑19 crisis recovery scenarios. Having quality long‑term forecasting is very important for asset valuation, above all in this time of uncertainty due to the pandemic. A forecasting model with a scientific basis allows for audits and due diligences, the creation of a good financial model to value the portfolios of renewable assets, mainly those of wind and photovoltaic energy production, the setting of adequate prices for bilateral contracts or PPA and the sound decision‑making associated with investments or mergers and acquisitions (M&A).

Since the beginning of the pandemic, at AleaSoft a series of webinars to analyse the evolution of the energy markets and the financing of the renewable energy projects in this situation was organised. These topics will continue to be analysed with updated information in the next webinar “Energy markets in the recovery of the economic crisis” that will take place on September 17.

Another way to monitor the main European electricity, fuels and CO2 emission rights markets is the AleaSoft’s observatories. In this tool, the data is updated daily and is visualised by comparative graphs of the last weeks.