AleaSoft Energy Forecasting, June 20, 2022. In the third week of June, the high temperatures, which favoured the increase in demand, the rise in gas and CO2 prices and a low wind energy production caused an increase in European electricity markets prices. The only market in which prices fell was MIBEL due to the effect of the production costs adjustment mechanism that started to be applied. The solar energy production increased in several markets, registering an all‑time high in the German market on June 15.

During the third week of June, the solar energy production increased by 22% in the German market compared to the previous week. In this market, a historical record of 324 GWh was registered on June 15 and an hourly record of 36 598 MWh that same day at 13:00. There were also increases in the French market, of 16%, and in the Italian market, of 11%. On the contrary, the solar energy production fell by 19% in the Portuguese market and by 16% in the Spanish market.

For the fourth week of June, the AleaSoft Energy Forecasting’s forecasts indicate a decrease in production in Germany, Spain and Italy. 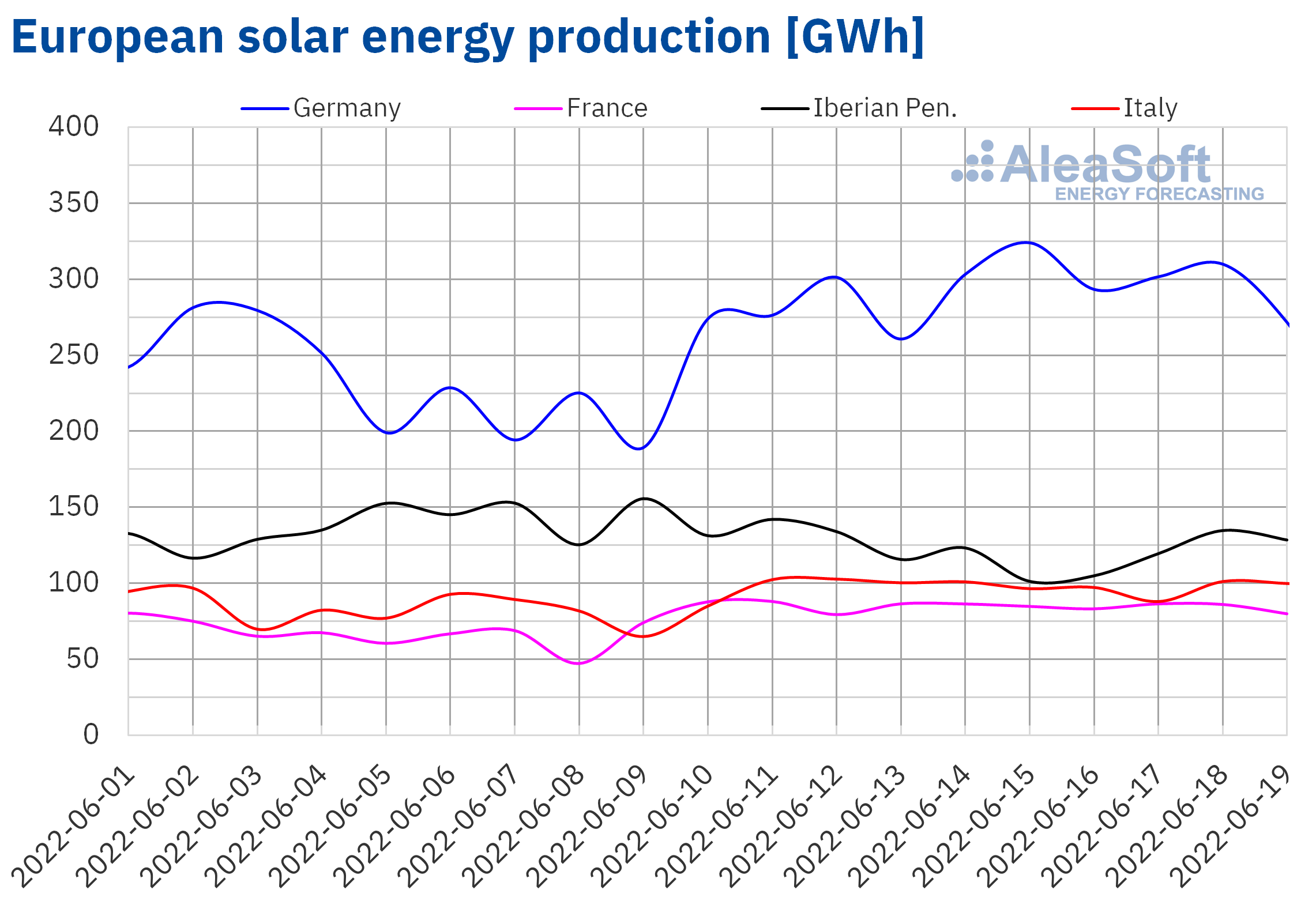 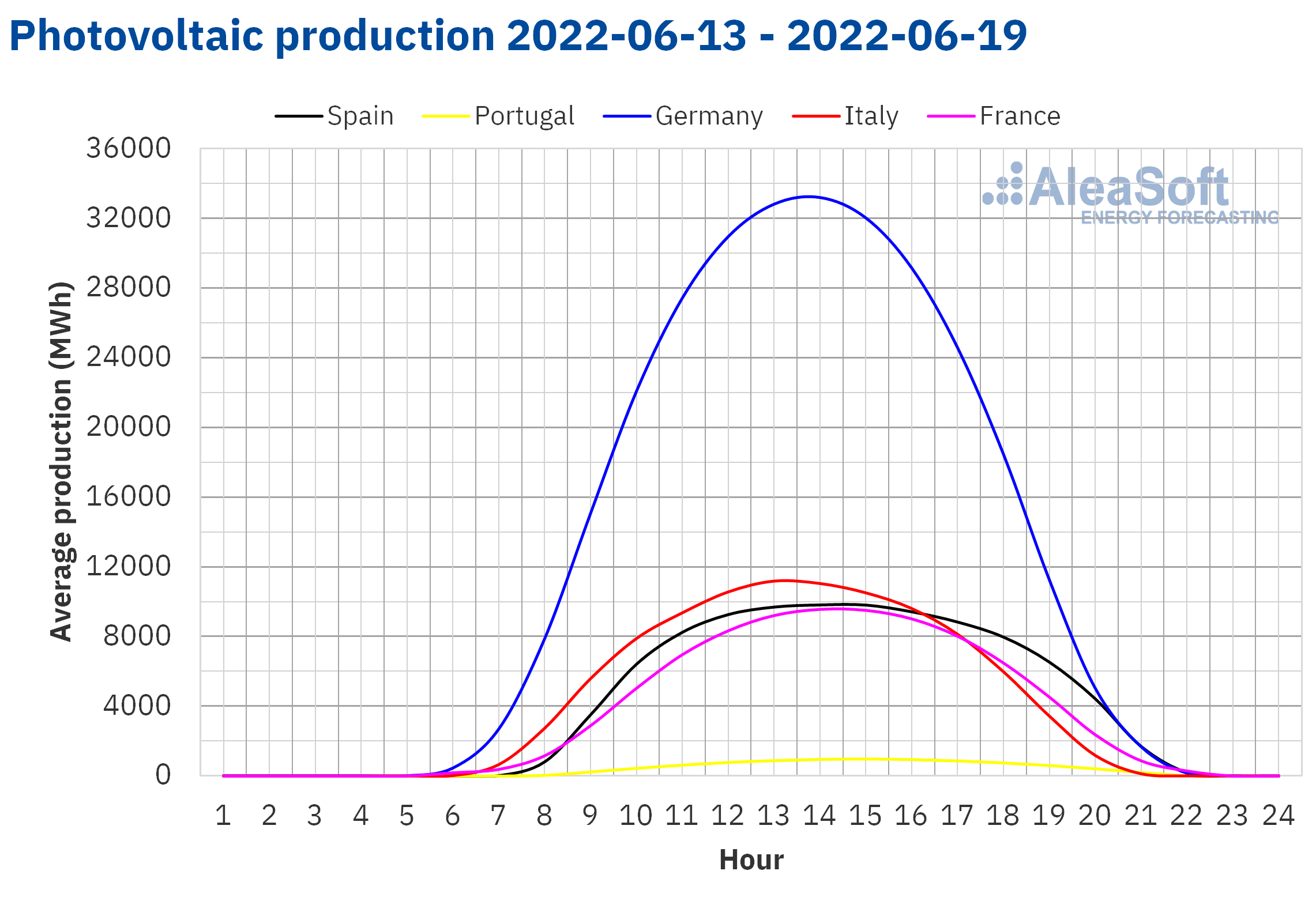 The wind energy production during the week of June 13 fell compared to the previous week in all European markets analysed at AleaSoft Energy Forecasting. The largest drop was 60% and was registered in the Italian market. In the rest of the markets, the reduction in production with this technology was between 2% and 20%.

For the week that began on June 20, the AleaSoft Energy Forecasting’s forecasts expect a general increase in wind energy production in the analysed markets. 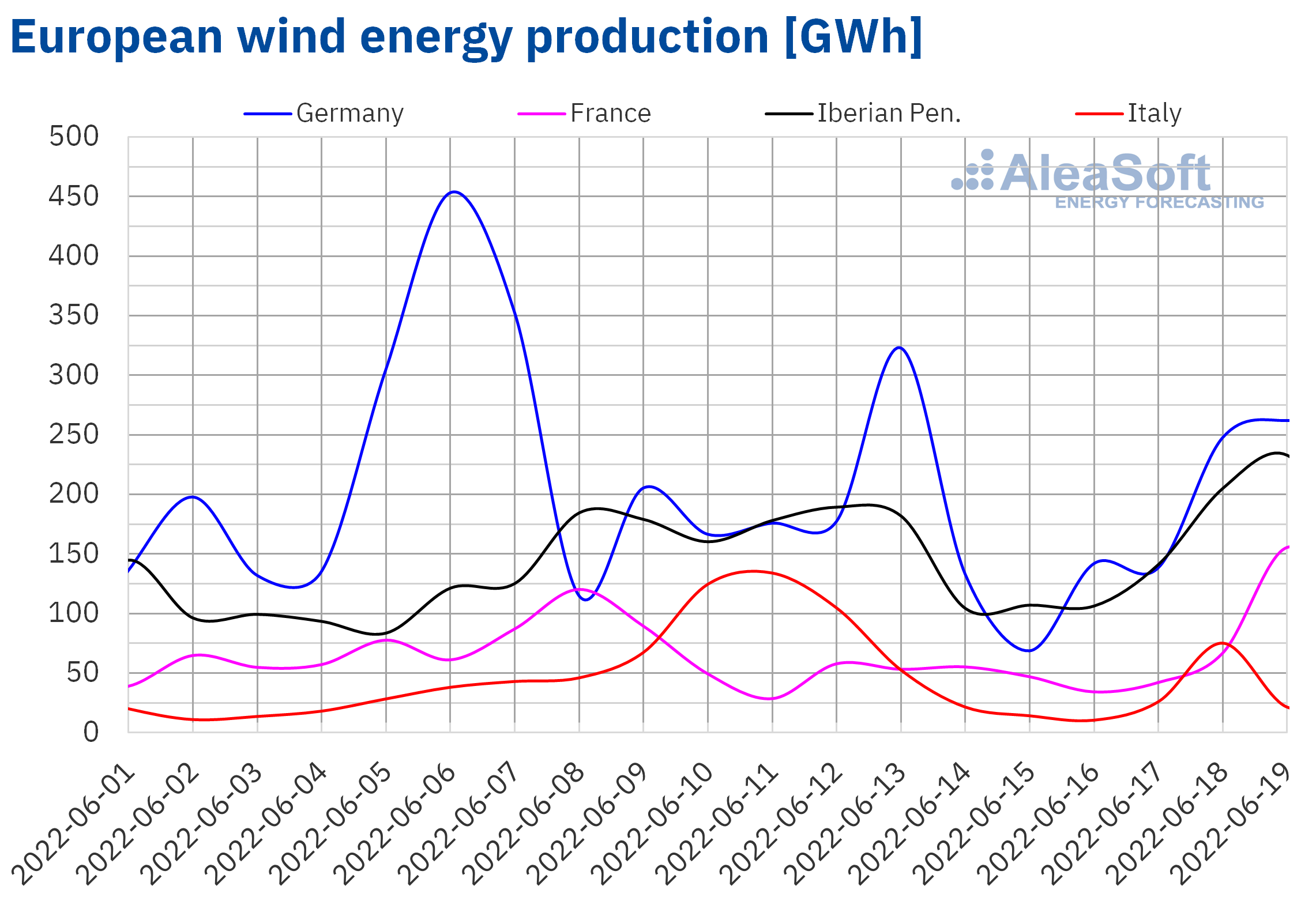 In the week of June 13, the electricity demand increased in most of the analysed European markets compared to the week that preceded it. The exception was the Portuguese market, where the demand decreased by 1.5% due to the national holiday of Thursday, June 16, Corpus Christi day. In terms of increases, the Spanish market was the one with the largest variation, as the demand increased by 9.8% as a result of the high temperatures registered during the week in the midst of the heat wave that hit the Iberian Peninsula. The markets of France and Italy were the second and third with the highest increases, of 6.9% and 6.5% respectively. In the rest of the markets the demand rose, between 0.2% of the German market and 2.9% of the Belgian market. The increases in demand were favoured by the increase in average temperatures during the week that ended in all analysed markets.

For the week of June 20, average temperatures are expected to decrease in most of the analysed European markets. In the case of the demand, the AleaSoft Energy Forecasting’s forecasts estimate that it will decrease in most markets, with the exception of the markets of the Netherlands, Portugal and Germany, where it is expected that they will continue to increase. 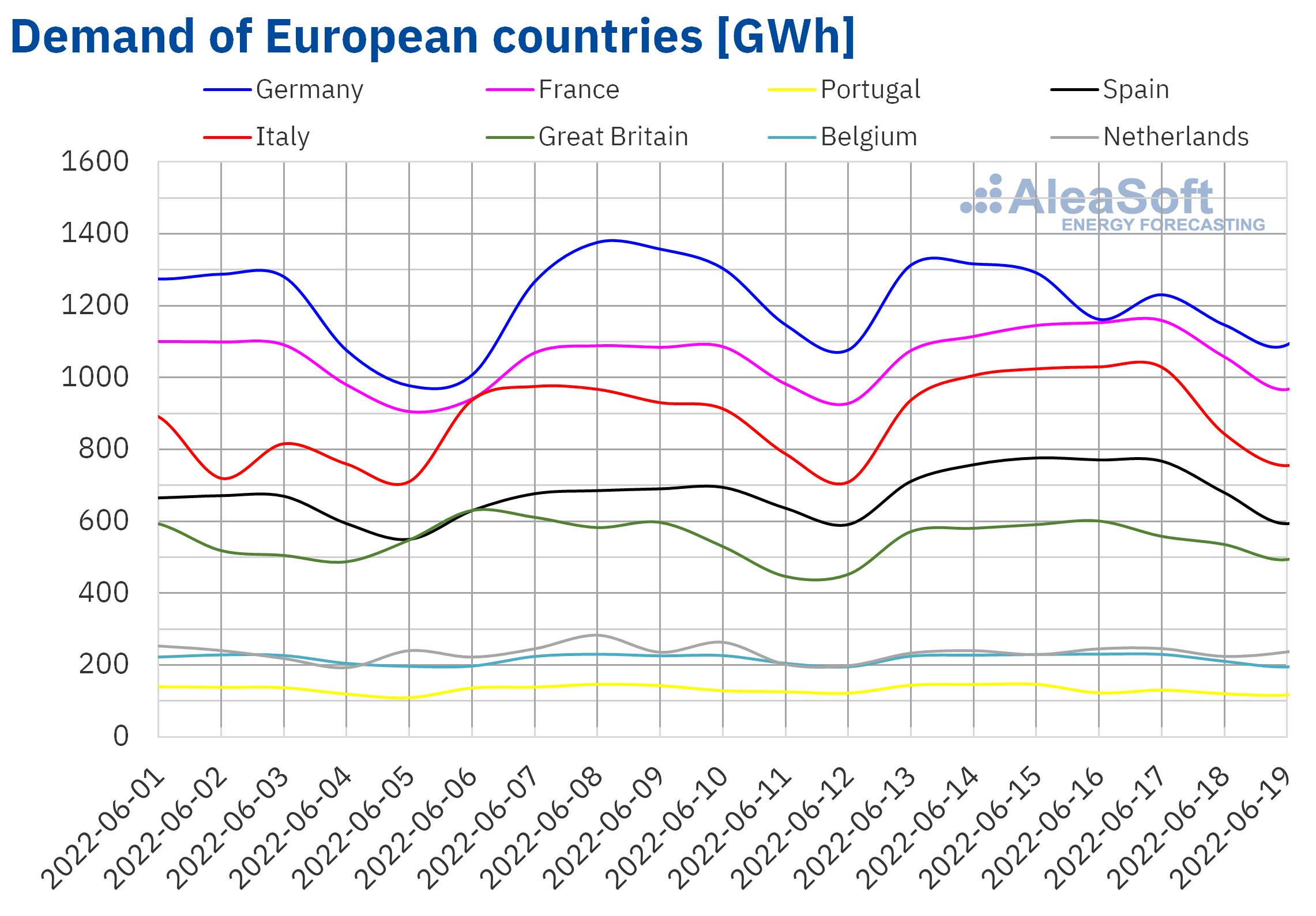 In the week of June 13, prices of almost all European electricity markets analysed at AleaSoft Energy Forecasting increased compared to the previous week. The exception was the MIBEL market of Spain and Portugal, with decreases of 8.4% and 8.7%, respectively. The largest rise in prices was that of the EPEX SPOT market of Belgium, of 46%. On the other hand, the smallest increase, of 3.0%, was that of the Nord Pool market of the Nordic countries. In the rest of the markets, the price rises were between 27% of the IPEX market of Italy and the EPEX SPOT market of Germany and 42% of the N2EX market of the United Kingdom.

In the third week of June, the average prices were above €190/MWh in most of the analysed electricity markets. The exceptions were the Nord Pool market with a weekly average of €100.29/MWh and the MIBEL market with €171.16/MWh. On the other hand, the highest weekly average, of €261.97/MWh, was registered in the Italian market. In the rest of the markets, the prices were between €191.76/MWh in the British market and €238.58/MWh in the French market.

During the week of June 13, the increase in demand in most markets and the general decrease in wind energy production led to an increase in the prices of the European electricity markets. In addition, the prices of gas and CO2 emission rights increased, contributing to this behaviour. However, the beginning of the application of a cap on the reference price of the gas used in the offers in the MIBEL market favoured the decrease in prices in this market as of June 15.

The AleaSoft Energy Forecasting prices forecasts indicate that in the week of June 20 the prices of most European electricity markets could continue to increase, influenced by the decrease in solar energy production and the increase in demand in some markets, as well as high gas prices. 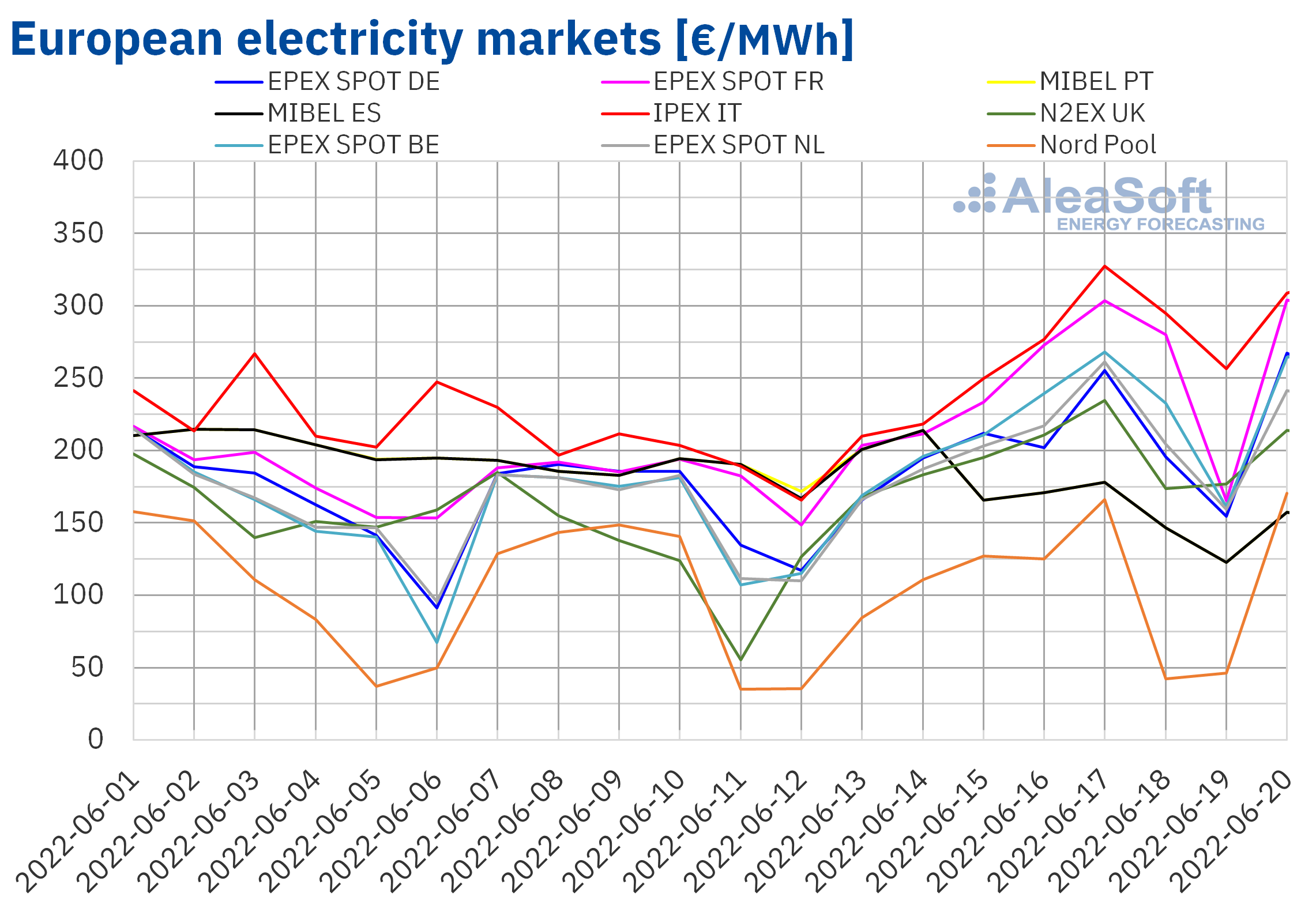 In the European electricity futures markets, when comparing the settlement prices of the sessions of June 10 and 17, significant increases are observed for the product of the third quarter of 2022 in all the markets analysed in AleaSoft Energy Forecasting. The increases were between the 12% registered in the NASDAQ market of the Nordic countries and the 34% reached in the EEX market of France. Among the main causes of this rise, which is actually the resumption of the upward trend that had been recorded in most markets, is the rise in gas prices during the week of June 13 to 17.

As for the futures prices for the next year 2023, the behaviour was similar, with a general rise. However, in this case, the largest increase was recorded in the ICE market of the Nordic countries, which was 16%, and the smallest increase, 3.3%, in the EEX market of France. The main reason for these increases is also the increase in gas prices.

Brent oil futures for the Front‑Month in the ICE market, on Monday, June 13, reached a settlement price of $122.27/bbl, 2.3% higher than the previous Monday. But the rest of the days of the week, with the exception of Thursday, the prices fell. As a result, the weekly minimum settlement price of $113.12/bbl was registered on Friday, June 17. This price was 7.3% lower than the previous Friday and the lowest since May 20. Concerns about the evolution of demand due to the possibility of a worsening economic situation had a downward influence on Brent oil futures prices during the third week of June.

Regarding the futures of CO2 emission rights in the EEX market for the reference contract of December 2022, in the third week of June they registered higher settlement prices than those of the same days of the previous week. The maximum settlement price of the week, of €86.20/t, was registered on Wednesday, June 15. This price was 8.0% higher than the same day of the previous week. The rest of the days of the week, the prices fell and the settlement price for Friday, June 17, was €82.37/t.

The vote on a new package of proposals for the reform of the CO2 emission rights market is scheduled for June 22, the result of which will influence prices. 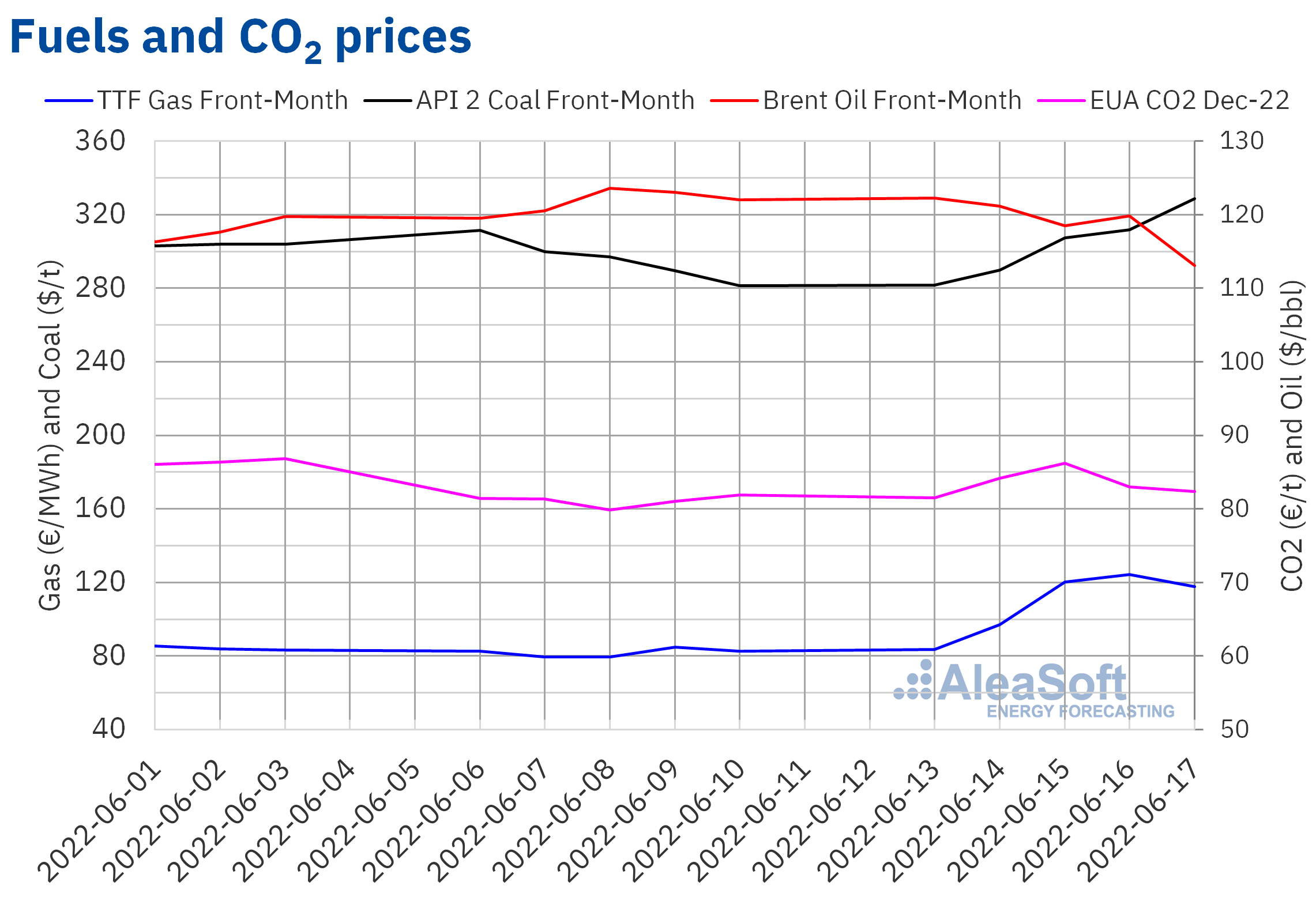 On June 14, Royal Decree Law 10/2022 came into force, which temporarily establishes a mechanism for adjusting production costs to reduce the electricity price in the Spanish wholesale market, known as the gas cap. The short‑, mid‑ and long‑term prices forecasting for the Iberian market made by AleaSoft Energy Forecasting already take into account the effects of this mechanism.

In the next AleaSoft Energy Forecasting and AleaGreen webinar, the evolution of the Iberian market will be analysed after the entry into operation of Royal Decree Law 10/2022 as part of the analysis that is usually carried out on the European energy markets. This webinar will be held on July 14 and guest speakers from H2B2, an expert company in hydrogen projects, will participate in it to analyse the future vision of green hydrogen, taking into account the importance that this renewable gas will have during the energy transition.

On July 7, Antonio Delgado Rigal, CEO of AleaSoft Energy Forecasting, will participate in the event “Forward Markets and Development of Renewable Energies” organised by OMIP and OMIClear, to analyse the present and future of market prices.