AleaSoft Energy Forecasting, June 17, 2022. The entry into operation of the cost adjustment mechanism of RDL 10/2022 highlighted the role of the combined cycle gas turbines as a backup for renewable energies. This need of support for wind and photovoltaic energies raises the question of what is going to replace natural gas in a 100% renewable system without fossil fuels towards which Europe is heading with the energy transition.

The entry into operation, on June 14, of the cost adjustment mechanism in the production of electricity, published in the Royal Decree Law 10/2022, coincided with the days of greatest combined cycle gas turbines production so far in 2022. On Thursday, June 16, the gas generation, that is, combined cycle gas turbines plus cogeneration, amounted to 413 GWh and covered 55% of the electricity demand.

This increase in generation with combined cycle gas turbines was the consequence of a combination of factors. On the one hand, the coincidence of a low wind energy generation and an increase in demand due to the rise in temperatures and the heat wave that is hitting the Iberian Peninsula. On the other hand, the entry into operation of the cost adjustment mechanism meant lower prices in the Iberian electricity market, so the electricity export to France increased, although it is not yet at its maximum. 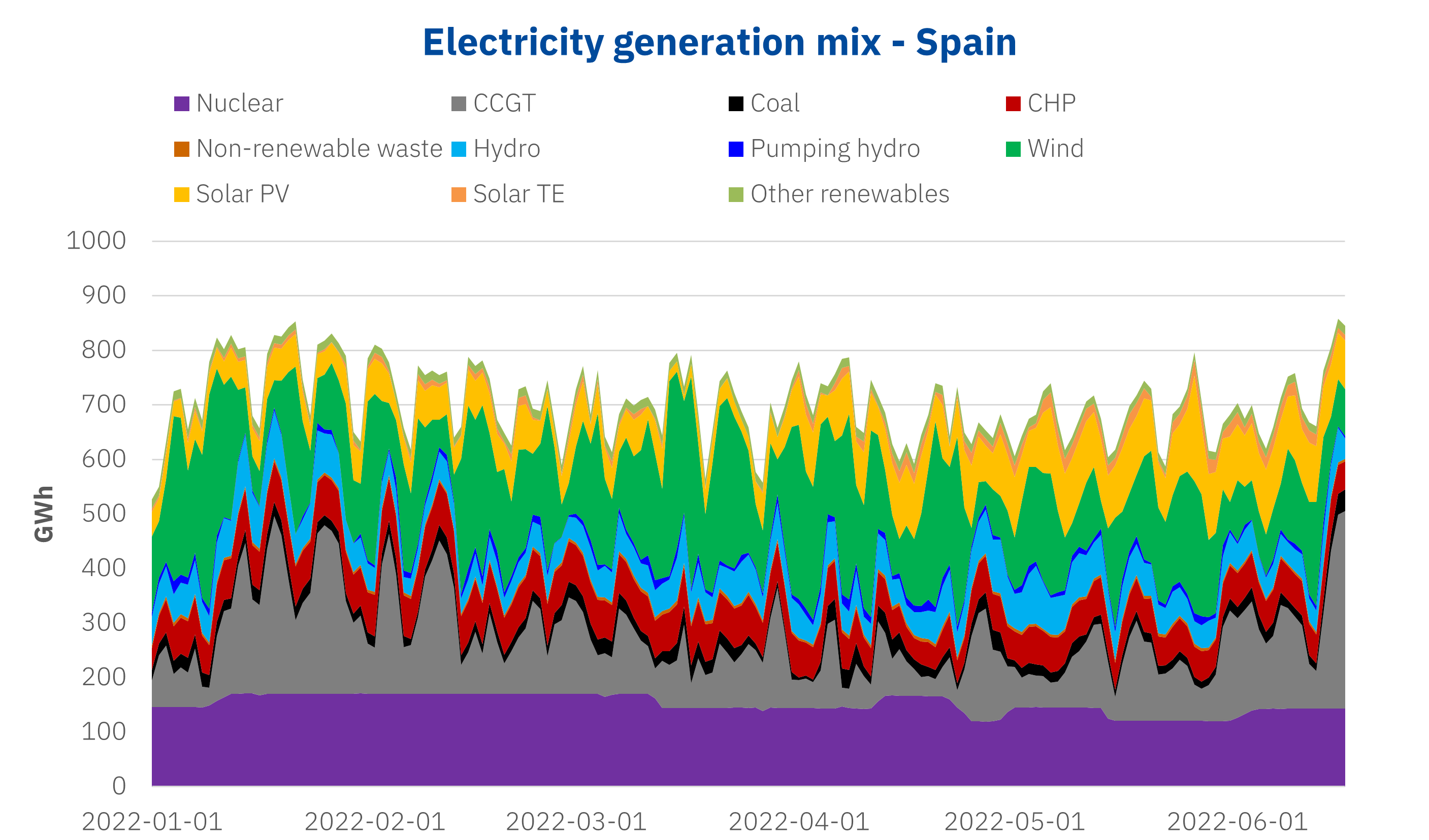 All this meant that, although there was a drop in prices in the daily market, due to having to compensate for a lot of generation with gas, in the end the final price is equal to or higher than the prices of the days prior to the application of the adjustment mechanism.

What will happen when there is no more gas?

Situations like this make us wonder, with some concern, what will happen in the future when renewable energy production declines and there are no fossil fuels to support generation? The question is not trivial. No matter how much renewable generation capacity is available, a certain amount of manageable backup generation will always be necessary, not only to cover those times when demand exceeds the availability of renewable sources, but also for issues of stability of the electricity system.

The answer to the question is not simple either, and therein lays the complexity of the energy transition that Europe and the world is facing for the total decarbonisation of the economy. But there are certain elements of which there is a reasonable certainty that they will be the protagonists of the solution. The most obvious solution is energy storage. The ability to store renewable energy at times of high production, for example during peak solar hours, and be able to discharge it at times of high demand, for example during the first hours of the night, would make a system based 100% on renewable energy.

But that only solves part of the problem. The system must also be able to store large amounts of renewable energy in times of high production, for example in summer, or times of low demand, like spring and autumn, and to dump it in months of high demand, such as winter. These seasonal energy storage systems must be capable of storing large amounts of energy for long periods of time. Systems such as batteries are ideal for short‑term storage, in daily cycles of charge and discharge, but it is not possible to use them for seasonal storage.

For seasonal storage, right now, the most viable system is green hydrogen. Hydrogen produced by electrolysis of water from renewable energies can be stored in large quantities for long periods of time, and reconverted into electricity through fuel cells.

Infrastructures for the production, storage, transportation and distribution of hydrogen require planning, time and investment. Knowing that seasonal energy storage is going to be essential in the energy transition, means that it is necessary and urgent to start planning and executing the projects that will make green hydrogen viable in the future.

Precisely, the role of green hydrogen in the energy transition will be the main topic of analysis in the next edition of the monthly webinars organised by AleaSoft Energy Forecasting and AleaGreen. All the technical and investment aspects for the development of green hydrogen projects will be analysed by Business Development experts from H2B2: África Castro and Anselmo Andrade. The webinar will take place on July 14 and, as usual, prospects of the European energy markets for the following quarters will be analysed.