AleaSoft, February 24, 2021. The MIBEL electricity market has been registering the lowest prices in Europe for several weeks. One of the causes of this behaviour is the high wind energy production, which reached an average production record of over 9000 MWh for 100 consecutive days.

Since January 23, 2021, the MIBEL electricity market of Spain and Portugal has had the lowest prices in Europe most of the days. The minimum daily price registered in this period was €1.42/MWh, on January 31. In Spain, 4.4% of the hours between January 23 and February 23 had prices below €1/MWh, a percentage that rises to 5.3% in Portugal. 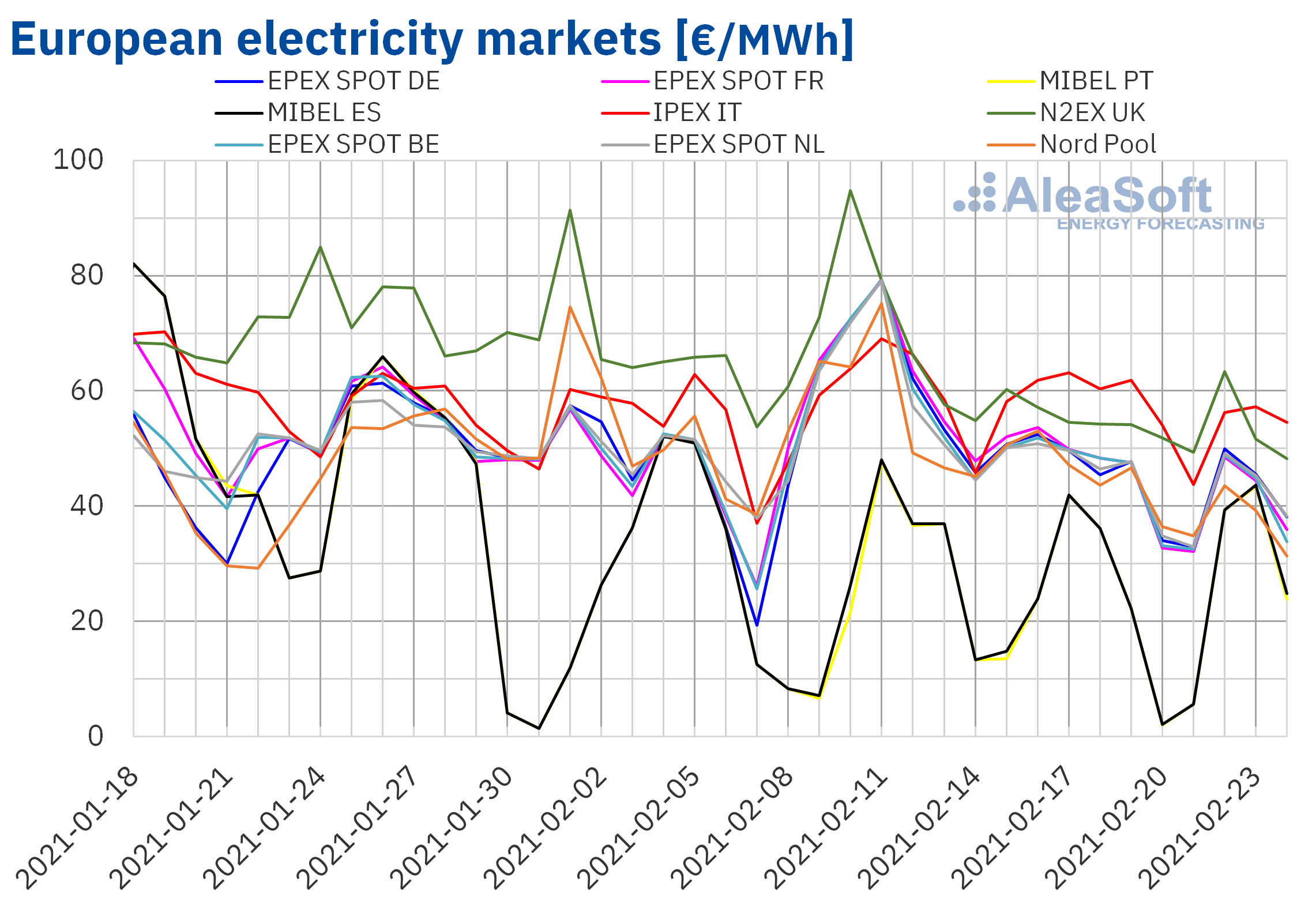 One of the main causes of these low prices was the high wind energy production registered in Spain.

Source: Prepared by AleaSoft with the Alea Energy DataBase (AleaApp) using data from OMIE and E.SIOS.

Analysis of the evolution of the wind energy production

At AleaSoft, the Alea Energy DataBase (AleaApp) was used to carry out an analysis of the evolution of the wind energy production of Spain and its influence on the electricity market prices, obtaining very interesting results. The Alea Energy DataBase (AleaApp) is a tool that compiles the data from the energy markets, facilitating their analysis and visualisation. In the analysis, the moving average of the wind energy production of Mainland Spain was calculated using the last 30, 50 and 100 observations respectively. In all three cases, the data from January 2017 were taken into account.

When analysing the moving average using a window of 30 observations, four points are observed in which the average wind energy production of 30 consecutive days exceeded 10 000 MWh: end of March 2018, end of November 2019, end of December 2020 and February 2021, the record being at this last point. The market price around these points was low, being also the lowest in Europe on some days of March 2018.

When calculating the moving average with a window of 50 observations, it is observed that it only exceeds 10 000 MWh in February 2021, coinciding with the current low prices period.

With the moving average calculated using a window of 100 observations, the seasonality of the wind energy production is shown and again it is observed that the record is in February 2021, where the average of the last 100 days exceeds 9000 MWh. The fact that in 2018 the moving average with 100 observations had its maximum value in April and that the wind energy capacity installed in the peninsula increased by 3.7 GW between December 2018 and January 2021 is an indication that the growing trend observed in 2021 could continue in the coming weeks, with the consequent downward influence on the electricity market prices. Another factor to take into account is that the wind turbines that are being installed are increasingly efficient, that is, not only the installed capacity increased but also the efficiency increased, making better use of the wind energy.

AleaSoft analysis of the evolution of the energy markets

At AleaSoft, reports for the energy sector are made in which the markets information is transformed into knowledge, intelligence, vision and opportunities.

On the other hand, a series of webinars is being held to analyse the evolution of the markets and the financing of the renewable energy projects. The last one was held on February 18 with the participation of speakers from Engie and special attention was paid to the PPA. The next webinar is being organised for March 18, with the collaboration of speakers from EY (Ernst & Young).