AleaSoft, May 19, 2021. Transportation tops the list of final energy consumption by sector in the European Union and Spain, and most of this energy comes from polluting sources. The decarbonisation of this sector is one of the most important challenges to achieve the climate neutrality, an objective that the European Union set for the year 2050. The renewable energies, the electric vehicles and the green hydrogen will be some of the protagonists in this transition.

The European Union set the goal of achieving the climate neutrality by 2050. If this goal is achieved, the year 2050 will mark the birth of a new era without emissions and the era of the fossil fuels will be left behind. It will be a radical change, without a doubt, but it must be done gradually, substituting the polluting energies for the renewable energies. There are around thirty years left in which it is important to become aware of the magnitude of the change and to plan well the steps to be carried out so that the achievement of this objective is the result of a process of constant evolution. This was one of the topics analysed in the webinar “Prospects for energy markets in Europe. Price forecasts and their importance for the development of renewable energies. Vision of the future” organised by AleaSoft on May 13.

This change is a great challenge, because approximately three‑quarters of the energy consumed in the European Union comes from fossil fuels, a proportion that is similar in Spain.

Source: Prepared by AleaSoft using data from the European Commission. Data of 2019.

The positive part of the challenge is that the ceiling for the development of the renewable energies is not in the national electricity systems but in the set of primary energies in Europe. In other words, the renewable energy capacity must increase, hand in hand with the interconnections, to decarbonise the electricity systems, but also to replace all the primary energy currently obtained from fossil fuels. The electrification of the economy and the commitment to the green hydrogen will be some of the vehicles that will make it possible to carry out this transition and at the same time avoid the cannibalisation of the prices in the electricity markets and the curtailments of renewable energies. Spain will benefit from this process thanks to its great solar and wind energy resource and will go from being a net importer of electricity and fuels to being a net exporter of electricity and green hydrogen.

The challenge of the transport decarbonisation

Source: Prepared by AleaSoft using data from the European Commission. Data of 2019.

Source: Prepared by AleaSoft using data from Eurostat. Data of 2019.

In Spain, the highest percentage of the emissions of this sector comes from the road transport, so concentrating efforts on reducing these emissions seems to be a good strategy. Governments and regulators must take action, offer support and create the necessary infrastructure to promote the use of the electric vehicles in the case of short distances and of the green hydrogen in heavy vehicles or long distances. In order for the transition to be made gradually, work must be done on the development of the necessary infrastructures so that in the future the batteries and the hydrogen can be used in navigation and aviation. 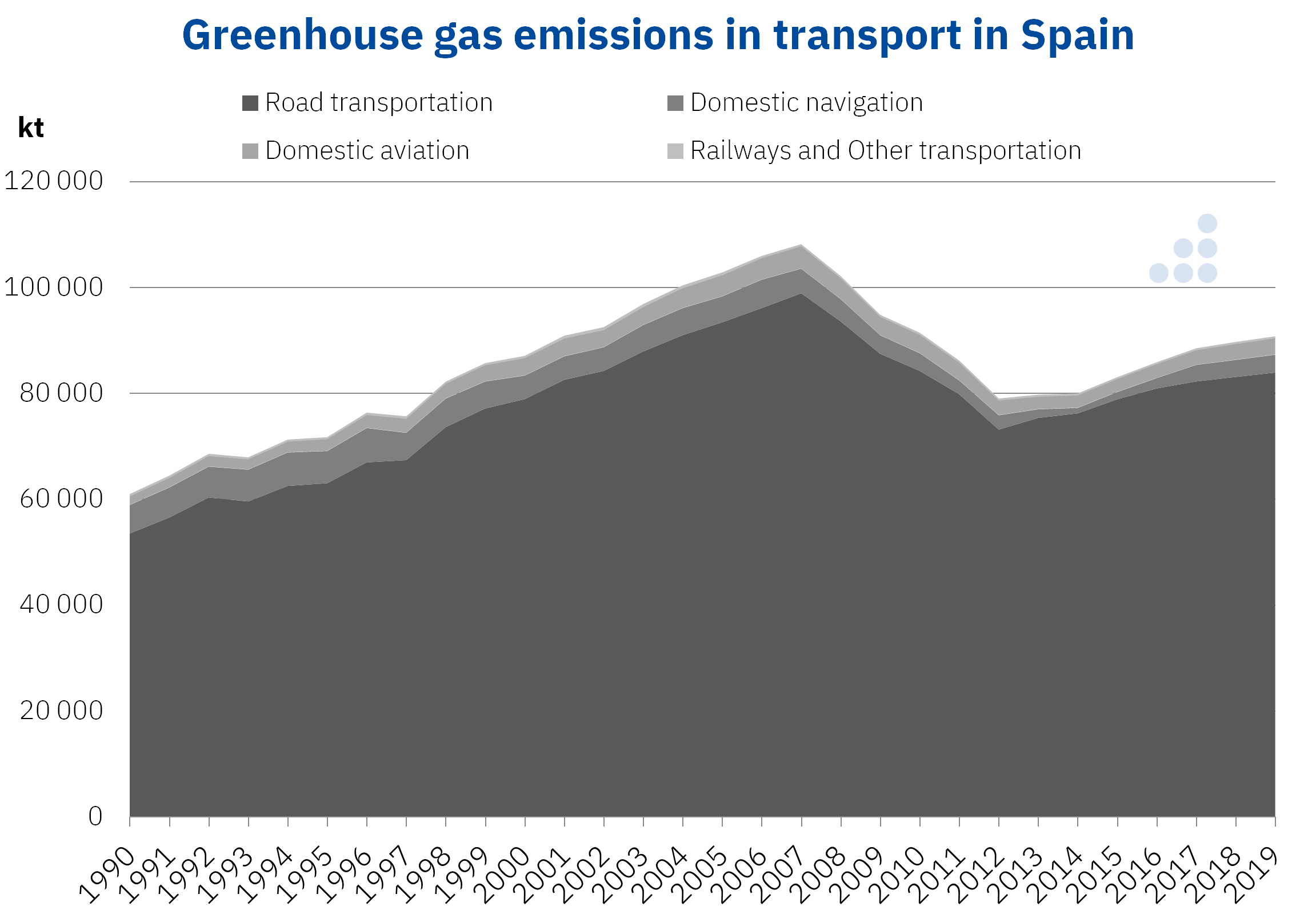 Source: Prepared by AleaSoft using data from the National Inventory of Greenhouse Gases of the Ministry for the Ecological Transition and the Demographic Challenge.

The renewable energy will be one of the protagonists in this transition process and in the new era without emissions. In the AleaSoft’s webinar, the importance of the long‑term electricity markets prices forecasts for the projects financing and the short- and mid‑term forecasts during the operation of the plants was discussed. In addition, the situation of high prices in the European energy markets during the last weeks was analysed, transmitting a message of calm in the present and optimism for the future.

On June 10, at AleaSoft a new webinar will be held, in which the challenge of the decarbonisation of the industry, the sector that is in second place in terms of final energy consumption both in the European Union and in Spain, and the role that the green hydrogen will also play in this process will be discussed. In addition, the usual analysis of the European energy markets will be carried out and the importance of the forecasts for the large consumers and electrointensives will be discussed.