AleaSoft, May 17, 2021. In the second week of May, the behaviour of the renewable energy production, mainly the wind energy, marked the fluctuations in the electricity markets prices that, in some cases, registered decreases in the weekly average despite the current context of high CO2 and gas prices. The CO2, gas and Brent futures hit all‑time highs that contributed to the increase in electricity futures prices.

During the week of May 10 to 16, the solar energy production decreased in most of the markets analysed at AleaSoft compared to the previous week. In the French market, the production fell by 19%, while in the German and Italian markets it fell by nearly 17%. On the other hand, despite the 16% drop in the Portuguese market, in the Iberian Peninsula the reduction was little due to the increase of 0.7% registered in the Spanish market.

For the week of Monday, May 17, the AleaSoft‘s solar energy production forecasting indicates an increase in the German and Italian markets compared to the previous week, while a drop in production is expected in the Spanish market. 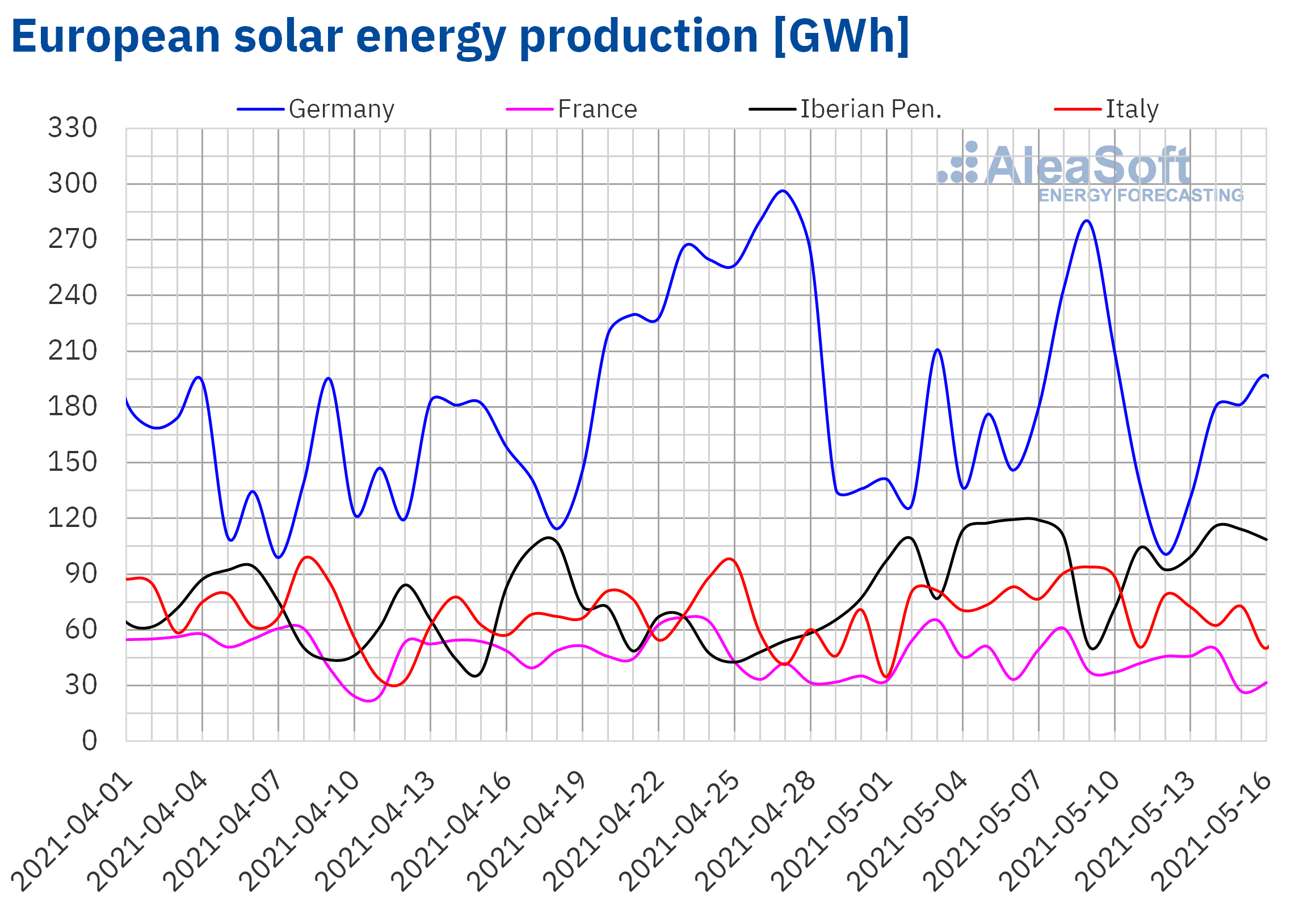 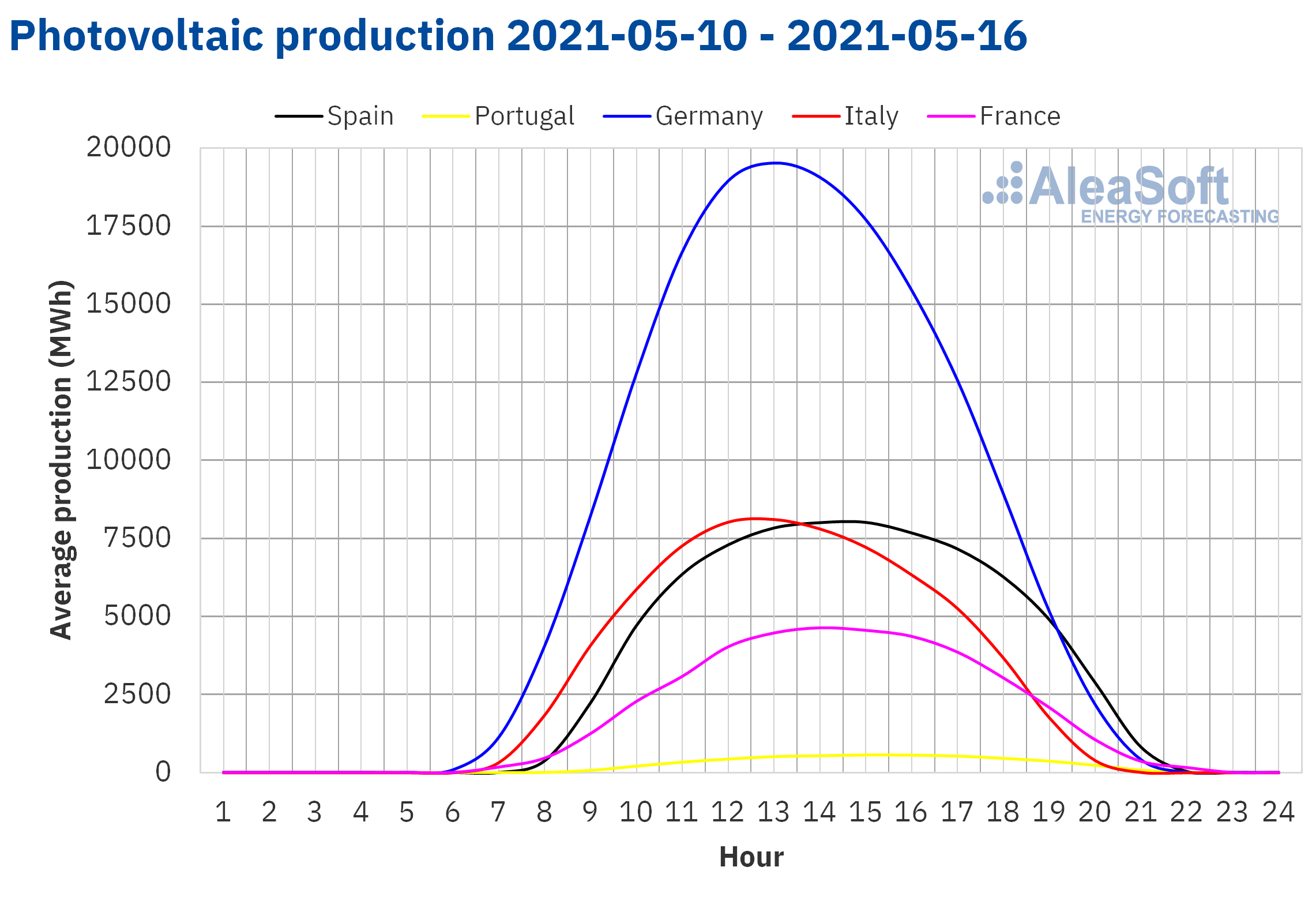 During the week of May 10, the wind energy production increased by 88% in the Iberian Peninsula compared to the previous week. In the Italian market, there was also a significant increase of 34%. Meanwhile, in the markets of France and Germany, the production with this technology reduced by 24% and 63%, respectively.

For the week of May 17, the AleaSoft‘s wind energy production forecasting indicates that it will be lower than that registered the previous week in the markets of Spain, Portugal and Italy. On the contrary, an increase is expected in the markets of France and Germany. 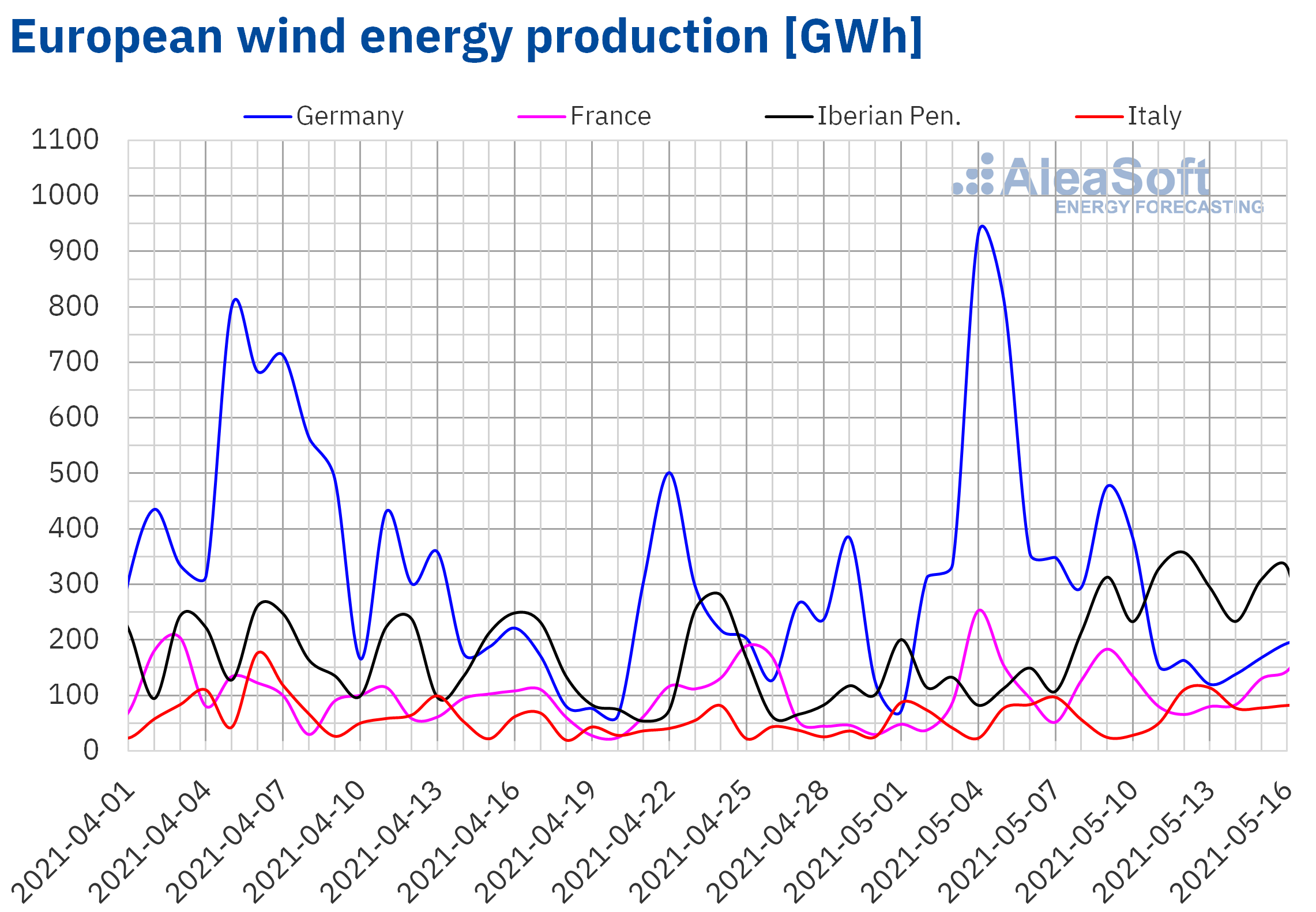 During the week of May 10, the electricity demand registered small variations in some European markets while in others it decreased compared to the previous week. The markets of Germany, France and Belgium were influenced by the drop in demand of Thursday, May 13, when the Ascension Day was celebrated. The impact of this holiday caused decreases of up to 8.5% in the case of Germany. When correcting the effects of this holiday on the German demand, the decrease stood at 3.1%.

The evolution of the demand during the past week, as well as the behaviour during the holiday of Thursday 13, can be analysed in the AleaSoft’s electricity markets observatories.

For the week of May 17, the AleaSoft‘s demand forecasting indicates an increase in most European markets given that the average temperatures are expected to be colder in most of the continent. 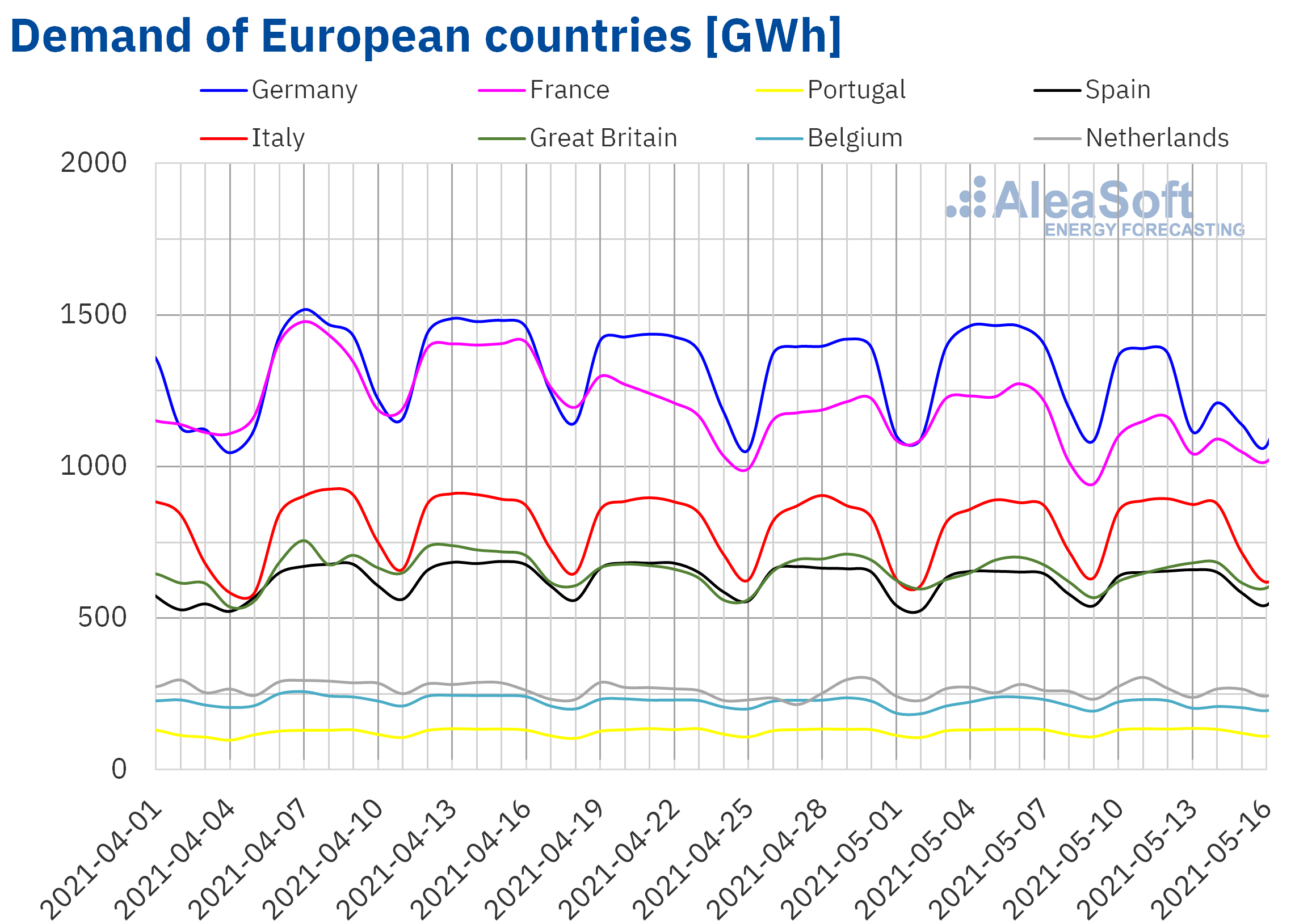 The week of May 10, the behaviour of the European electricity markets prices analysed at AleaSoft varied depending on the market. While in the EPEX SPOT and N2EX markets the prices increased, in the MIBEL, IPEX and Nord Pool markets there were decreases in the weekly average price. Regarding the price drops, they were between 7.0% of the IPEX market of Italy and 16% of the MIBEL market of Spain. On the other hand, the price increases were more pronounced, from 13% of the N2EX market of the United Kingdom to 37% of the EPEX SPOT market of Germany.

In the second week of May, the highest weekly average price was that of the N2EX market, of €92.76/MWh. While the lowest average was that of the Nord Pool market of the Nordic countries, of €43.74/MWh, followed by those of the Spanish and Portuguese markets, of €52.50/MWh and €52.77/MWh, respectively. In the rest of the markets, the prices were between €60.17/MWh of the EPEX SPOT market of France and €67.65/MWh of the IPEX market. 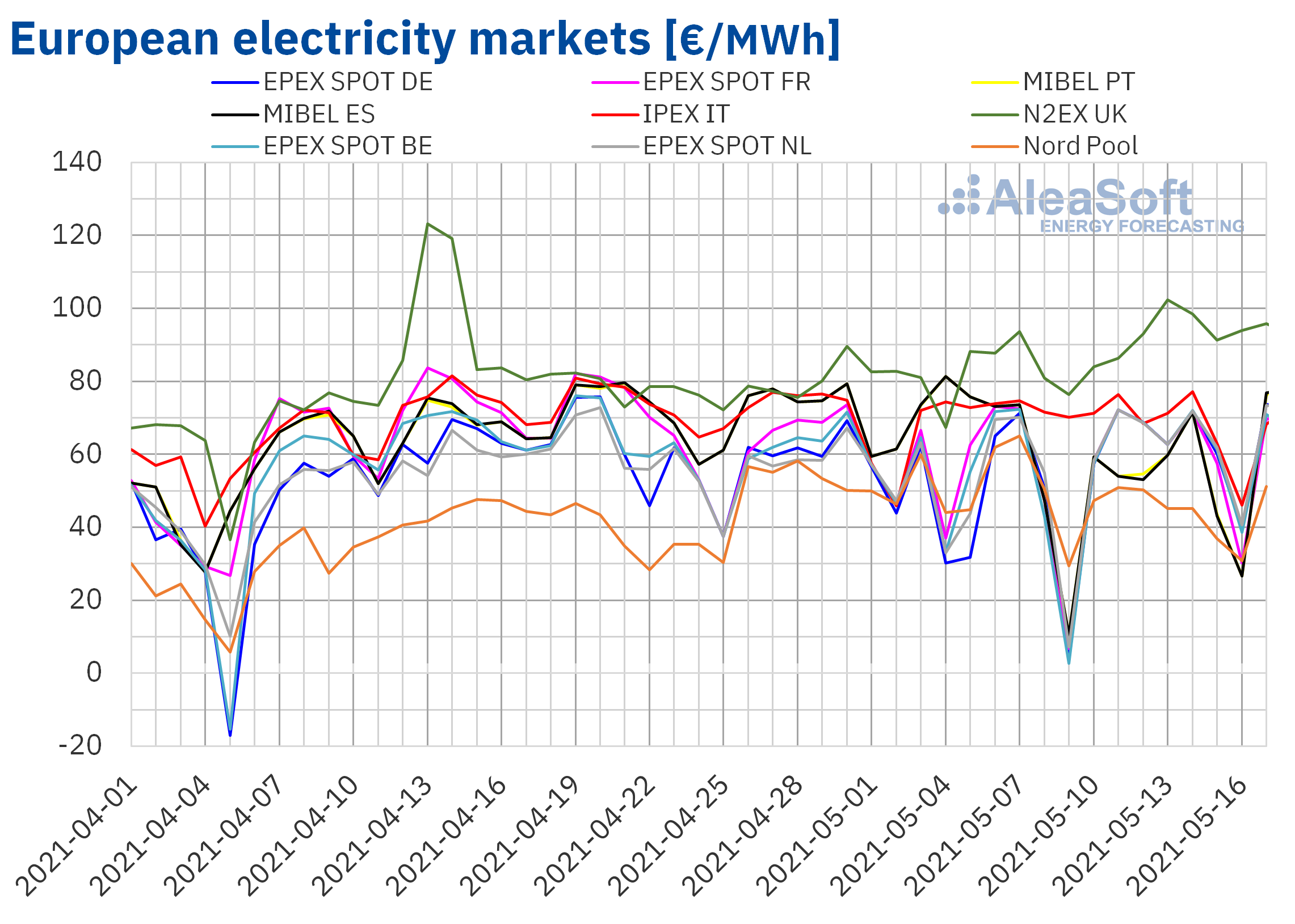 During the second week of May, the increase in wind energy production in the Iberian Peninsula and Italy favoured the decrease in prices in the MIBEL and IPEX markets. In contrast, the renewable wind and solar energy production fell in countries such as France and Germany, which, together with the high CO2 and gas prices, contributed to the price increases in the EPEX SPOT market. 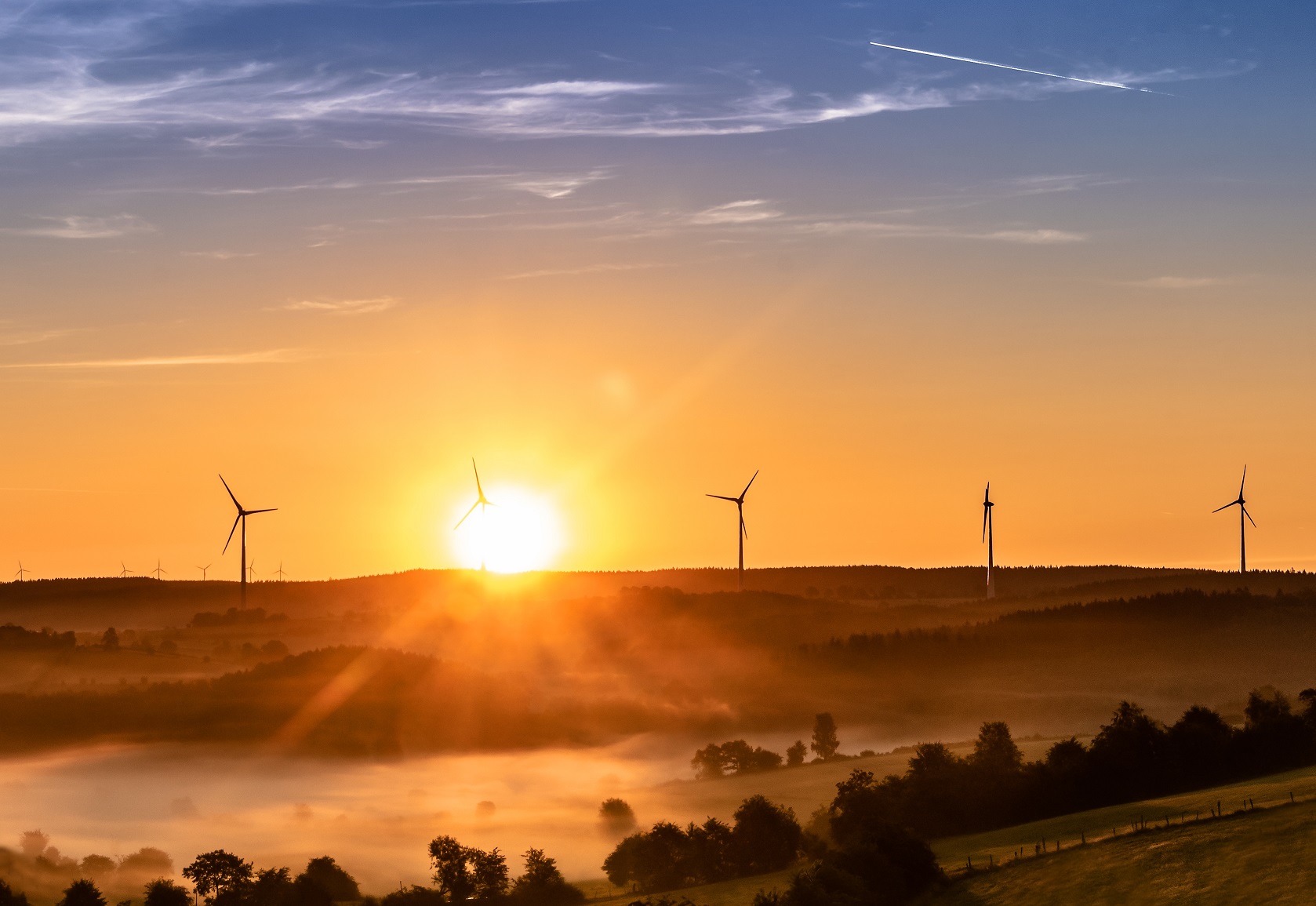 In the second week of May, the European electricity futures markets analysed at AleaSoft registered a sharp rise in the prices of the product for the next quarter. The ICE market of the Netherlands was the one with the highest percentage increase, with more than 10% above the price of Friday, May 7. But in general, the EEX market of Spain and the United Kingdom, the OMIP market of Spain and Portugal and the ICE market of the United Kingdom and Belgium all had increases equal to or greater than 10%. The Nordic countries region was the one where the prices increased the least, with rises of 2.3% and 2.7% in the ICE and NASDAQ markets, respectively.

As for the future for the next year, the price increase was also generalised, although to a lesser extent. In this case, the EEX market of Spain was the one with the greatest increase, closely followed by the EEX market of Germany. Once again, the ICE and NASDAQ markets of the Nordic countries were those with the lowest variation, with increases of 2.0% and 1.7%, respectively.

The Brent oil futures prices for the month of July 2021 in the ICE market began the second week of May with increases. On Wednesday, May 12, a settlement price of $69.32/bbl was reached, which was the highest in the last two years. However, on Thursday the price fell by 3.3%, but on Friday it recovered to $68.71/bbl.

The expectations about the improvement of the US economy as well as a weaker dollar favoured the price increases of the Brent oil futures. The drop in US oil reserves also contributed to the rises. However, the COVID‑19 pandemic situation in India continues to raise concerns about the pace of the demand recovery. This situation is aggravated by the cyclone that is affecting the west coast of the country.

As for the TTF gas futures prices in the ICE market for the month of June 2021, the second week of May they were higher than €25/MWh and had a generally upward trend. As a consequence, the settlement price of Friday, May 14, was €26.83/MWh, 12% higher than that of the previous Friday and the highest in the last two years.

The high gas demand in Asia contributed to this upward trend. In addition, the low levels of the reserves, the lower than normal temperatures and the decrease in the flow of gas from Norway due to maintenance operations will favour the continuation of the upward trend in the coming days.

Regarding the CO2 emission rights futures in the EEX market for the reference contract of December 2021, in the second week of May, they registered price increases almost every day. The largest of these daily increases, of 4.3%, corresponded to Wednesday, May 12. As a result, on Friday, May 14, the settlement price was 12% higher than that of the previous Friday, reaching a historical maximum price of €56.65/t. 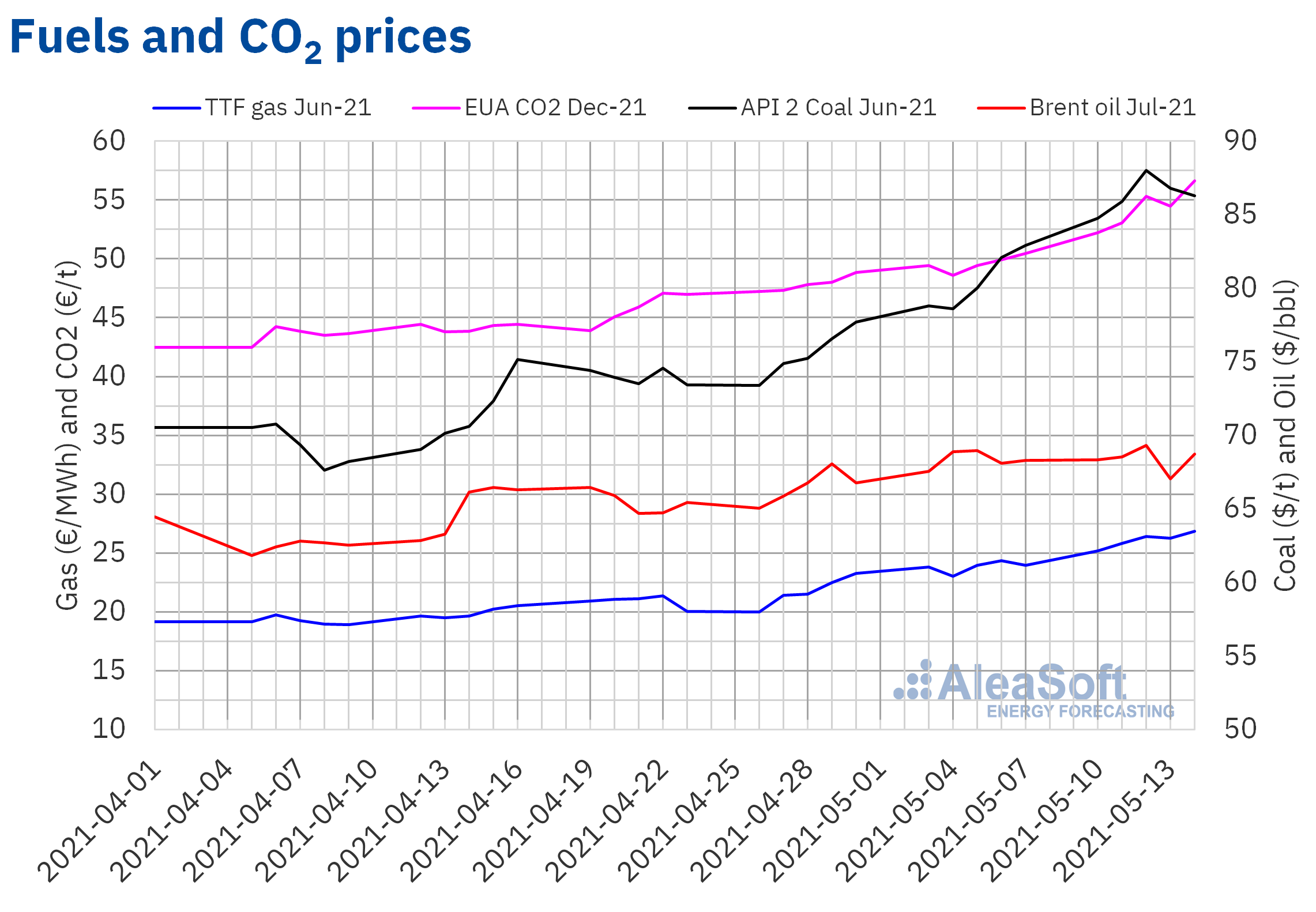 Last Thursday, May 13, the webinar “Prospects for energy markets in Europe. Price forecasts and their importance for the development of renewable energies. Vision of the future” was held, in which the current situation of high prices in the European energy markets was analysed. In the webinar a message of optimism was transmitted, taking into account that the AleaSoft‘s models suggest that the current prices are above the market equilibrium price and therefore this situation should be reversed at the mid‑ and long‑term. In addition, the vision of the future on the decarbonisation of the transport sector and the usefulness of market prices forecasts for the renewable energy developers were analysed. On June 10, the second part of the webinar will be held in which, in addition to carrying out the usual analysis of the evolution of the markets, the importance of the forecasts for the large consumers and electrointensive, the vision of the future on decarbonisation of the industry and the role that the green hydrogen will play in this whole process will be discussed.

As part of the informative work carried out at AleaSoft, on Thursday, May 20, the company will participate in a webinar organised by the AEE (Asociación Empresarial Eólica) entitled “Price forecasts and vision of the future in the energy sector”. The webinar, which will be held in Spanish, will analyse the prospects for the energy markets in the coming years and how the price forecasts are a necessary input for the financing of the renewable energy projects and for the operation of the generation parks.