Aleasoft, May 14, 2020. The wind energy production increased in most of Europe, lowering the electricity prices, except in the Iberian Peninsula, where the decrease in wind energy contributed to a rise in prices. Meanwhile, the electricity demand continues to rebound in the European markets as the de‑escalation of the confinement measures due to the COVID‑19 pandemic advances, this time helped by lower temperatures.

The solar energy production during the period between Monday, May 11, and Wednesday, May 13, decreased in all the markets analysed at AleaSoft compared to the average of the previous week. In the Iberian Peninsula the decrease was 37%, while in the markets of France, Germany and Italy it was 36%, 26% and 23% respectively.

In the year‑on‑year analysis of the first 13 days of May, the production with this technology increased by 39% in the Italian market and by 30% in the Iberian Peninsula. In the German market the production during this month increased by 19%, while, on the contrary, in the French market it fell by 3.2%.

For this week of May 11, the analysis carried out at AleaSoft indicates that the production with this technology will be lower than that of the previous week in Germany, Spain and Italy. 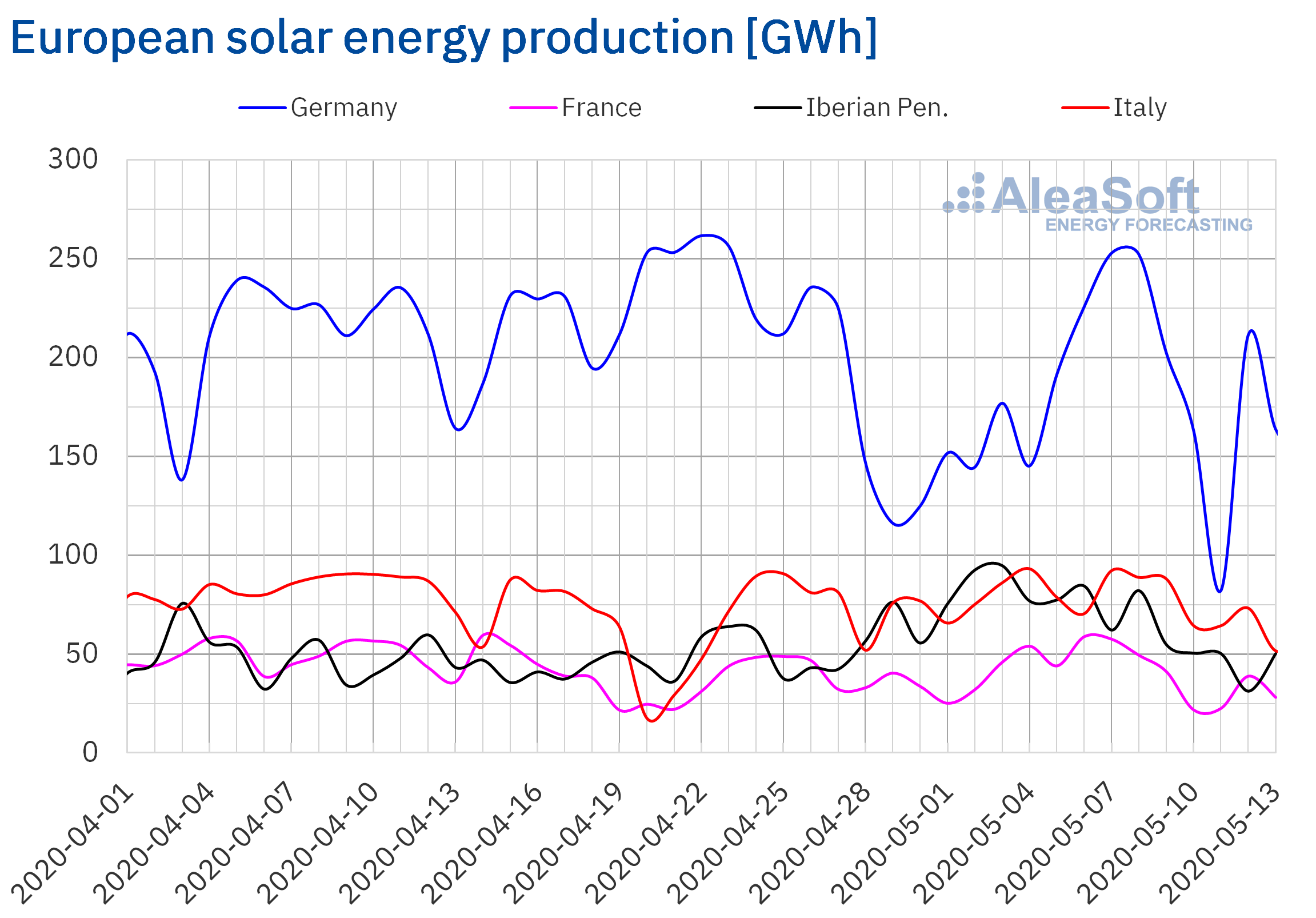 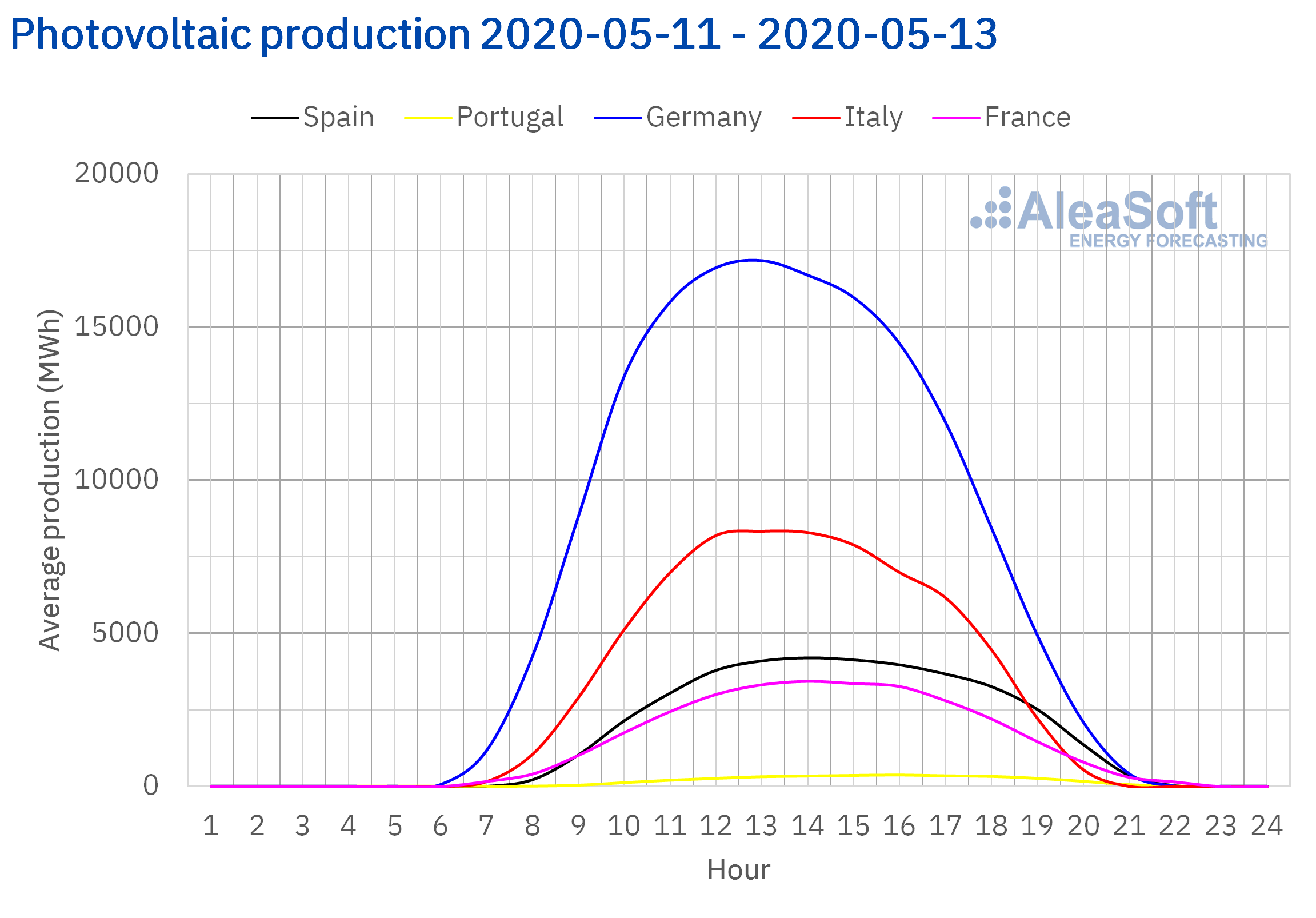 The average wind energy production for the first three days of this week, from May 11 to 13, was more than double in the French and German market compared to the average of the previous week. In the Italian market there was an increase in production of 44%, while, on the contrary, in the Iberian Peninsula it fell by 22%.

The production with this technology during the current month until yesterday, May 13, compared to the same period of 2019, fell by 25% in the Iberian Peninsula and by 34% in Italy. A 22% decrease was registered in the German market, while it fell only by 2% in the French market. 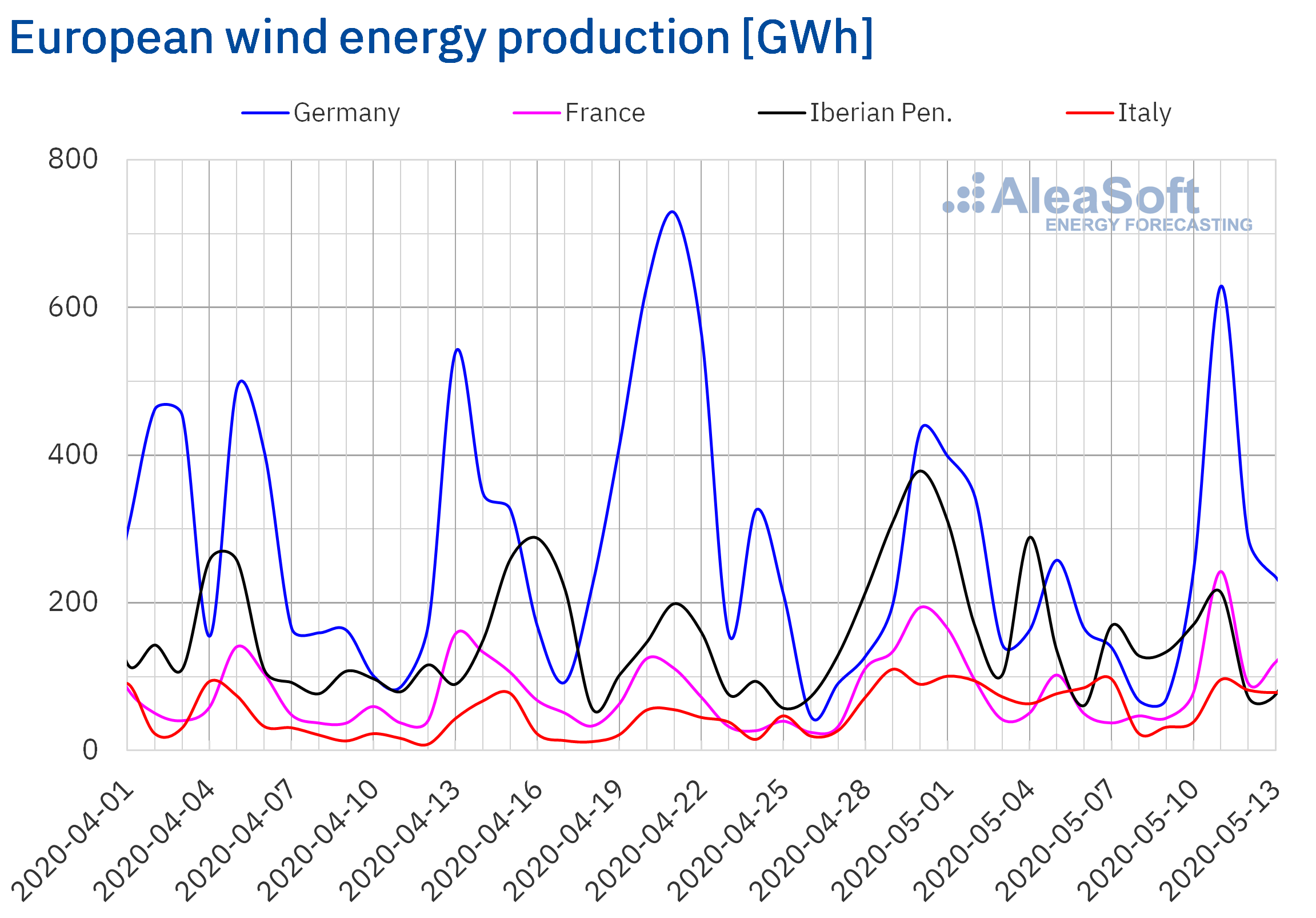 The solar energy production in Mainland Spain, which includes both the photovoltaic and solar thermal technologies, decreased by 38% so far this week compared to the average values of the previous week. However, when comparing the past days of May with the same period of 2019, the production with this technology increased by 31%. The analysis carried out at AleaSoft indicates that this week the solar energy production will be less than last week’s total.

The average wind energy production in the first three days of this week decreased by 20%, compared to the average of the previous week in Mainland Spain. From the first day of this month of May to yesterday, May 13, the wind energy production decreased by 24% compared to the same period of 2019. For this week, the production with this technology is expected to be lower than that of the previous week. 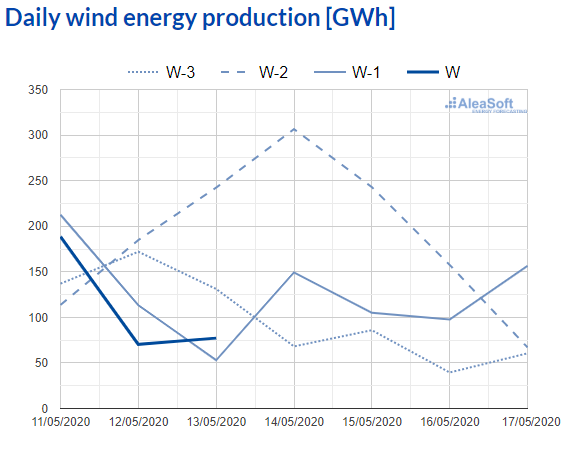 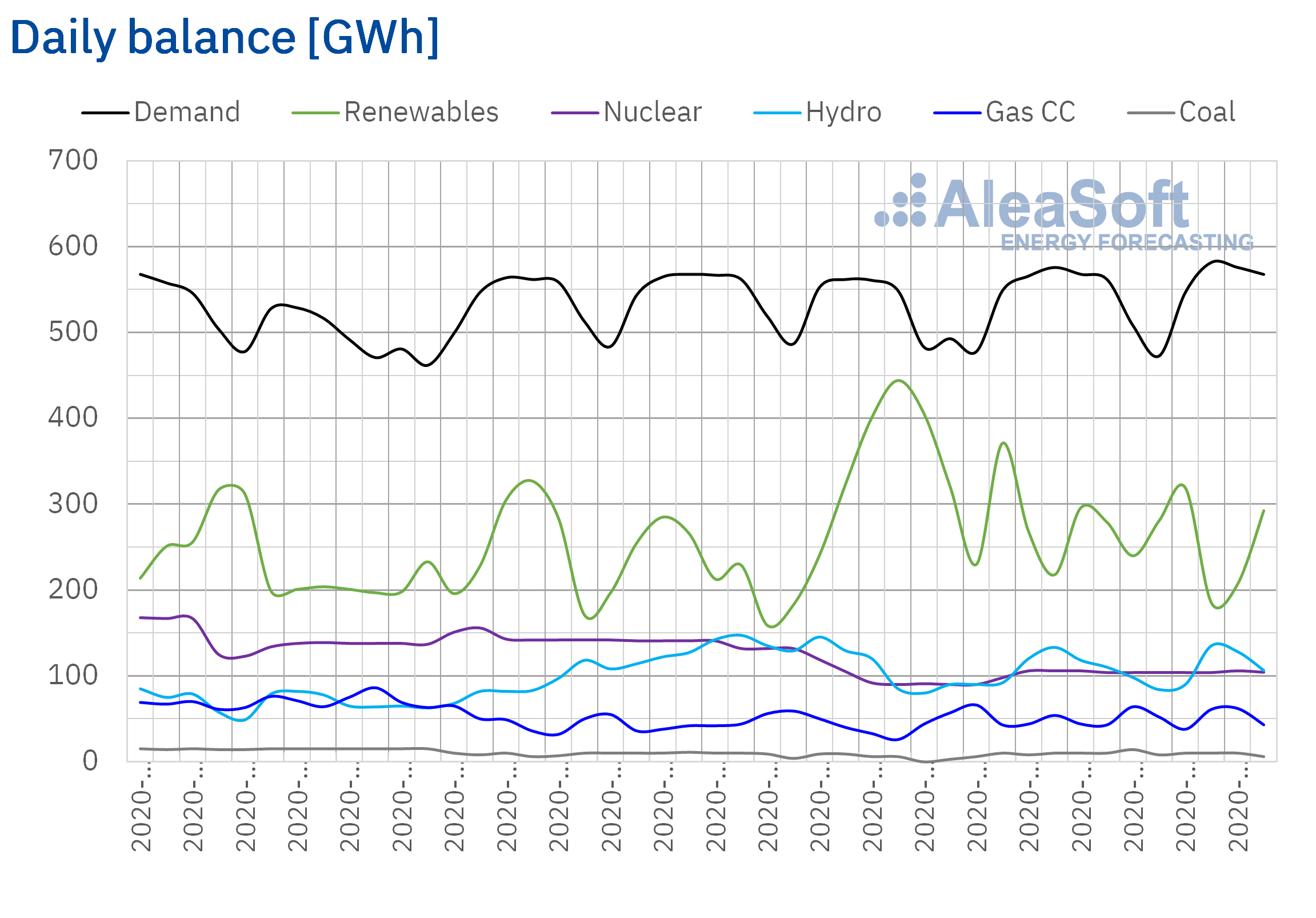 The hydroelectric reserves currently have 15 865 GWh stored, according to data from the last Hydrological Bulletin of the Ministry for the Ecological Transition and the Demographic Challenge, representing an increase of 20 GWh compared to the previous bulletin of week 18 of 2020.

The demand of various electricity markets of Europe rose from Monday, May 11, to Wednesday, May 13, compared to the same period the previous week, from May 4 to 6, the main cause being the general drop in average temperatures. In France, it rose 6.7% due to the 4.3 °C decrease in average temperatures in this period. This increase was followed by those of Great Britain and Italy, which registered 2.7% and 1.9% respectively. In the markets of Germany and Belgium the increase was 1.2% in both. A separate case was the behaviour in Portugal, where the demand fell by 2%.

At AleaSoft it is possible to consult observatories that allow analysing the evolution of the demand in Europe, from an hourly, as well as weekly and monthly perspective.

For this week, the AleaSoft‘s demand forecasting indicates a growth in weekly demand for France, Great Britain and Belgium compared to the week of May 4. In the rest of the cases, the volume at the end of the week is expected to be similar to that of the previous week. 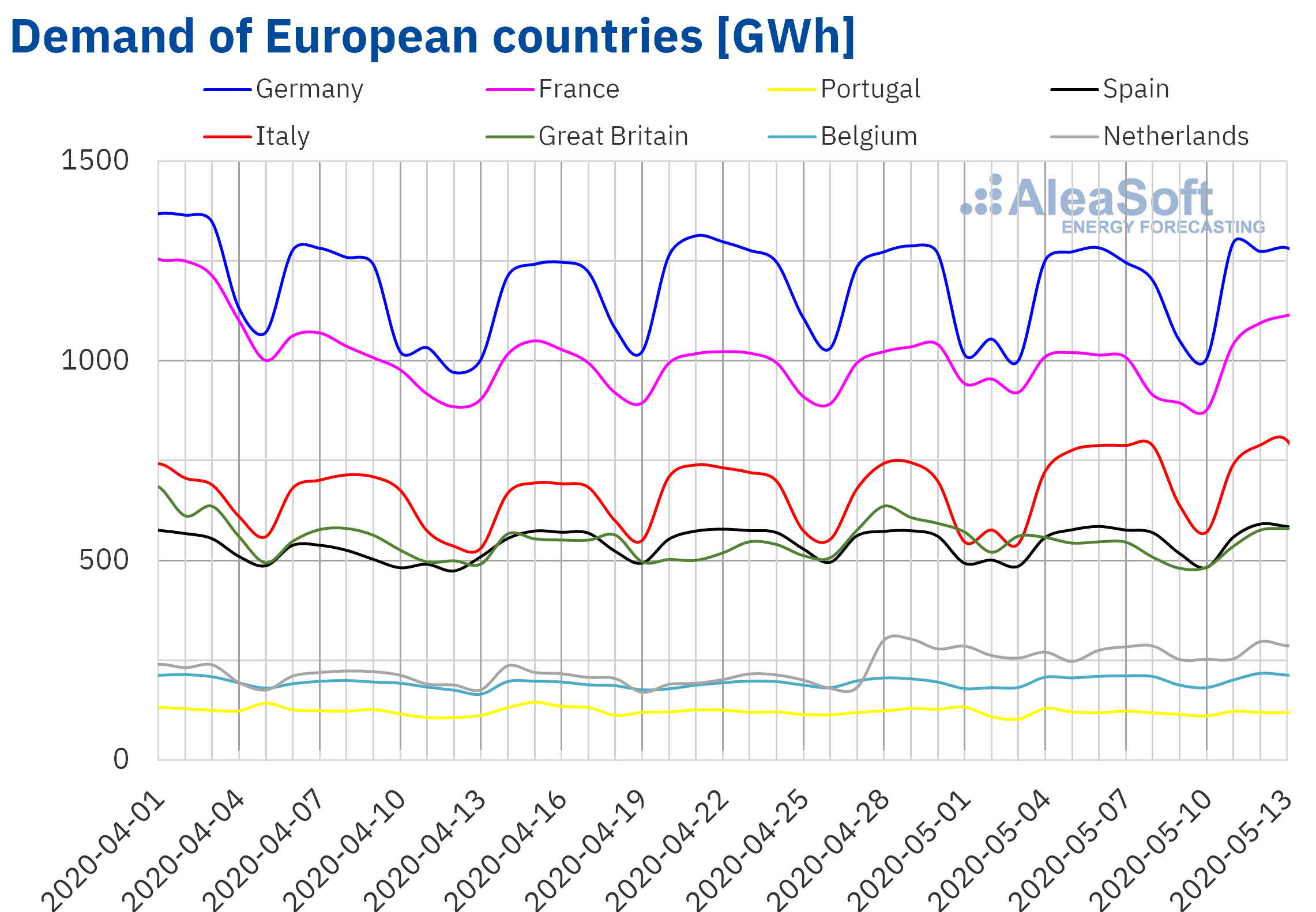 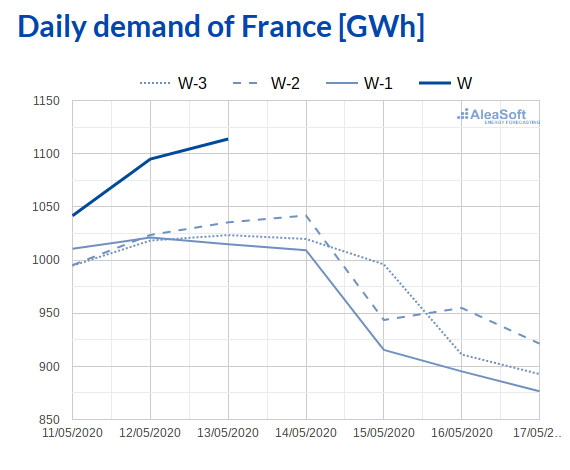 In the first four days of the week of May 11, the prices decreased in most European electricity markets compared to those of the same days of the previous week. The exceptions were the Nord Pool market of the Nordic countries and the MIBEL market of Spain and Portugal, with increases of 51%, 15% and 15%, respectively. On the other hand, the greatest drop in prices, of 8.1%, occurred in the EPEX SPOT market of Belgium. While the smallest decline was that of the N2EX market of Great Britain, of 3.6%. In the rest of the markets, the price drops were between 4% of the EPEX SPOT market of France and 5.8% of the EPEX SPOT of the Netherlands.

The prices continued with averages below €30/MWh for the first four days of this week of May 11. The market with the lowest average price so far this week, of €12.30/MWh, was again the Nord Pool market. While the market with the highest average, of €27.96/MWh, was again the British market, followed by the IPEX market of Italy, with €24.41/MWh. The rest of the markets had average prices between €18.20/MWh of France and €22.33/MWh of the MIBEL market in Spain and Portugal.

On the other hand, although the daily prices were positive in all the analysed markets during the first days of this week, in the early hours of Monday, May 11, there were negative hourly prices in the N2EX market and the EPEX SPOT market of France and Belgium. The lowest prices in each market were at hour 5, of ‑€2.24/MWh in France, of ‑€2.29/MWh in Great Britain and of ‑€4.98/MWh in Belgium. 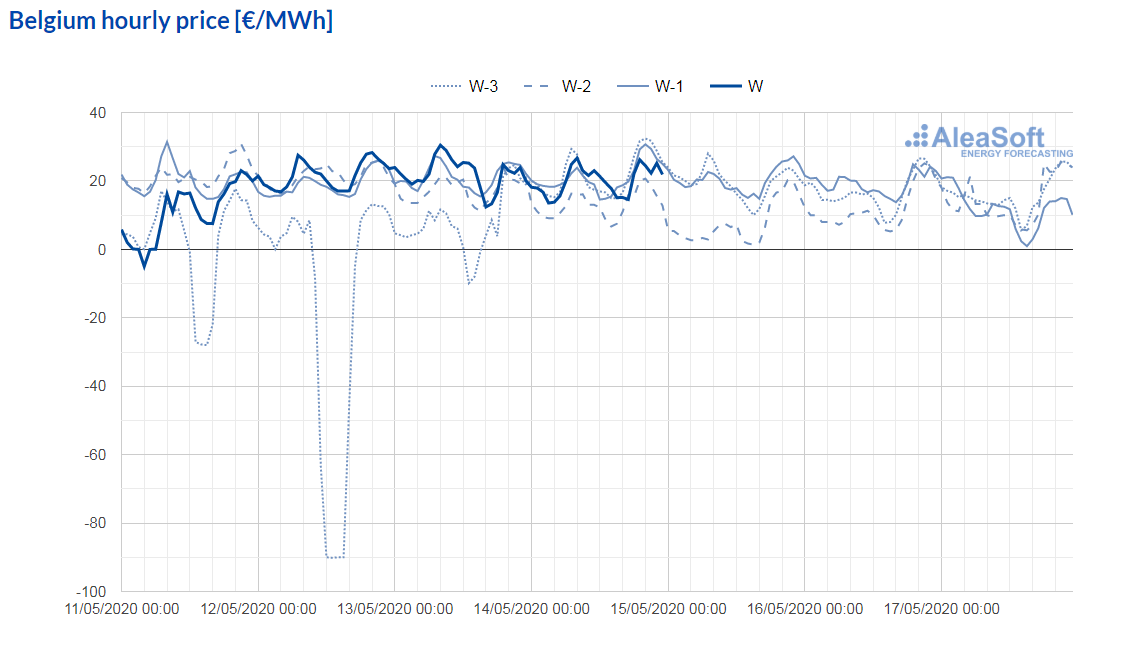 A significant increase in wind energy production in some European countries such as Germany and France allowed the price drops of the first days of this week. 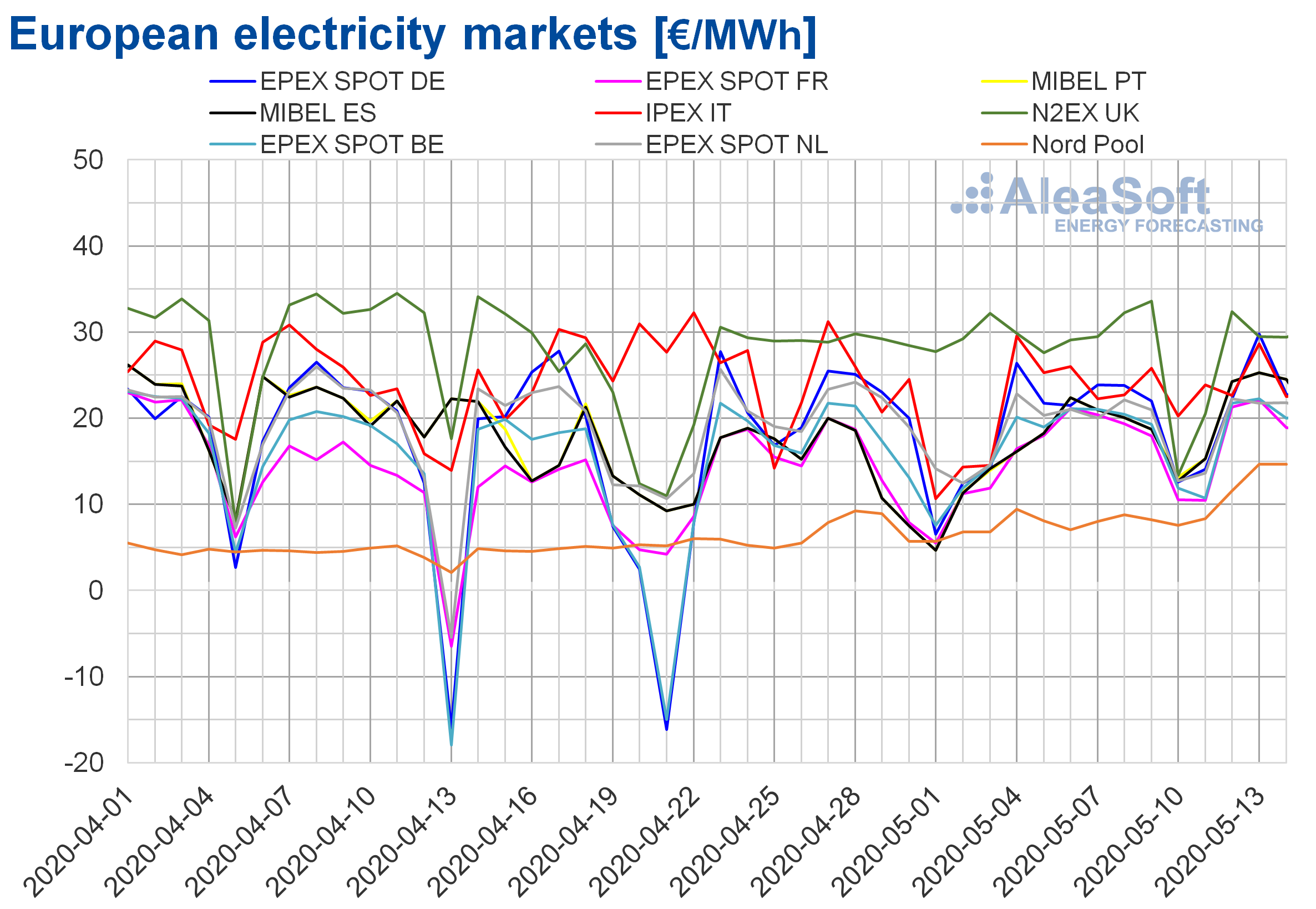 The average price of the first four days of the week of May 11 increased by 15% in the MIBEL market of Spain and Portugal compared to that of the same days of last week. This market together with the Nord Pool of the Nordic countries were the only European markets that increased in price these days.

For both Spain and Portugal, the average price for the period from May 11 to 14 was €22.33/MWh, the third highest in the analysed European electricity markets.

The increase in prices in the MIBEL market is related to the decrease in wind and solar energy production in Spain and Portugal. In addition, the temperatures also dropped around 4 °C in both countries the first days of the week.

The AleaSoft‘s price forecasting indicates that the first days of the next week of May 18, the prices will continue to increase in the MIBEL market under the influence of the decrease in wind energy production in the whole of the Iberian Peninsula. 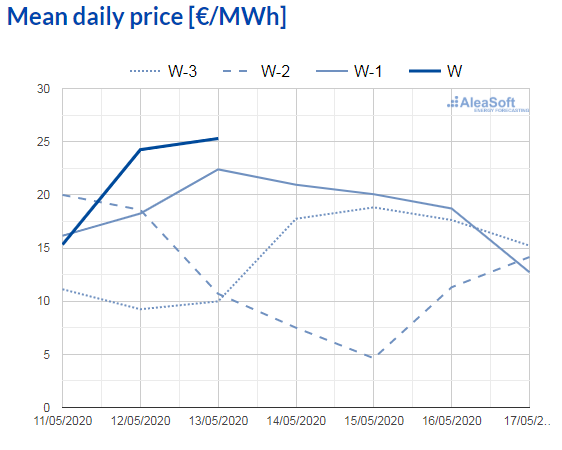 The electricity futures prices for the next quarter registered price falls in almost all the markets analysed at AleaSoft. The ICE and NASDAQ markets of the Nordic region were the exceptions, with increases of 2.4% and 2.1%, respectively. In the rest of the markets, the falls were between 3.8% of the OMIP market of Spain and Portugal and 8.7% of the ICE market of Belgium.

As for the electricity futures for 2021, the prices fell so far this week in all analysed markets. The EEX market of Germany registered the greatest drop, of 4.5%. Great Britain was the region where the prices varied the least, both in the ICE and EEX markets, with a drop in futures prices of 1.3%.

The Brent oil futures prices for the month of July 2020 in the ICE market during the first days of this week on May 11 remained below $30/bbl. Yesterday, Wednesday, May 13, the minimum settlement price so far this week, of $29.19/bbl was reached. This price was 1.8% lower than that of the previous Wednesday, but $1.99/bbl higher than the previous week’s minimum value, registered on Monday, May 4.

The cuts in production and the relaxation of the confinement measures to stop the expansion of the COVID‑19 in some countries allowed reaching a settlement price of $30.97/bbl last Friday, May 8. But the fear that a new increase in the number of infections will slow the recovery of the economy and the fact that the reserves remain at high levels prevented the prices from continuing to rise this week.

The TTF gas futures prices in the ICE market for the month of June 2020 during the first days of this week, from May 11 to 13, continued to decline. On Wednesday, May 13, a settlement price of €5.12/MWh was reached, 11% lower than that of Wednesday of the previous week and the lowest in the last two years.

Regarding the TTF gas prices in the spot market, the first days of this week, they recovered until reaching an index price of €5.65/MWh on Tuesday, May 12. This is the second highest price so far this month, after the €5.68/MWh of May 1. But, afterwards, the prices fell again and the price of today, Thursday, May 14, is €5.06/MWh, which is lower than the minimum registered in October 2009.

As for the CO2 emission rights futures prices in the EEX market for the reference contract of December 2020, they started the week of May 11 with decreases. On Tuesday, May 12, a settlement price of €18.52/t was reached, which was 3.0% lower than that of the previous Tuesday and the lowest since April 6. Yesterday, May 13, the prices increased slightly to €18.67/t. 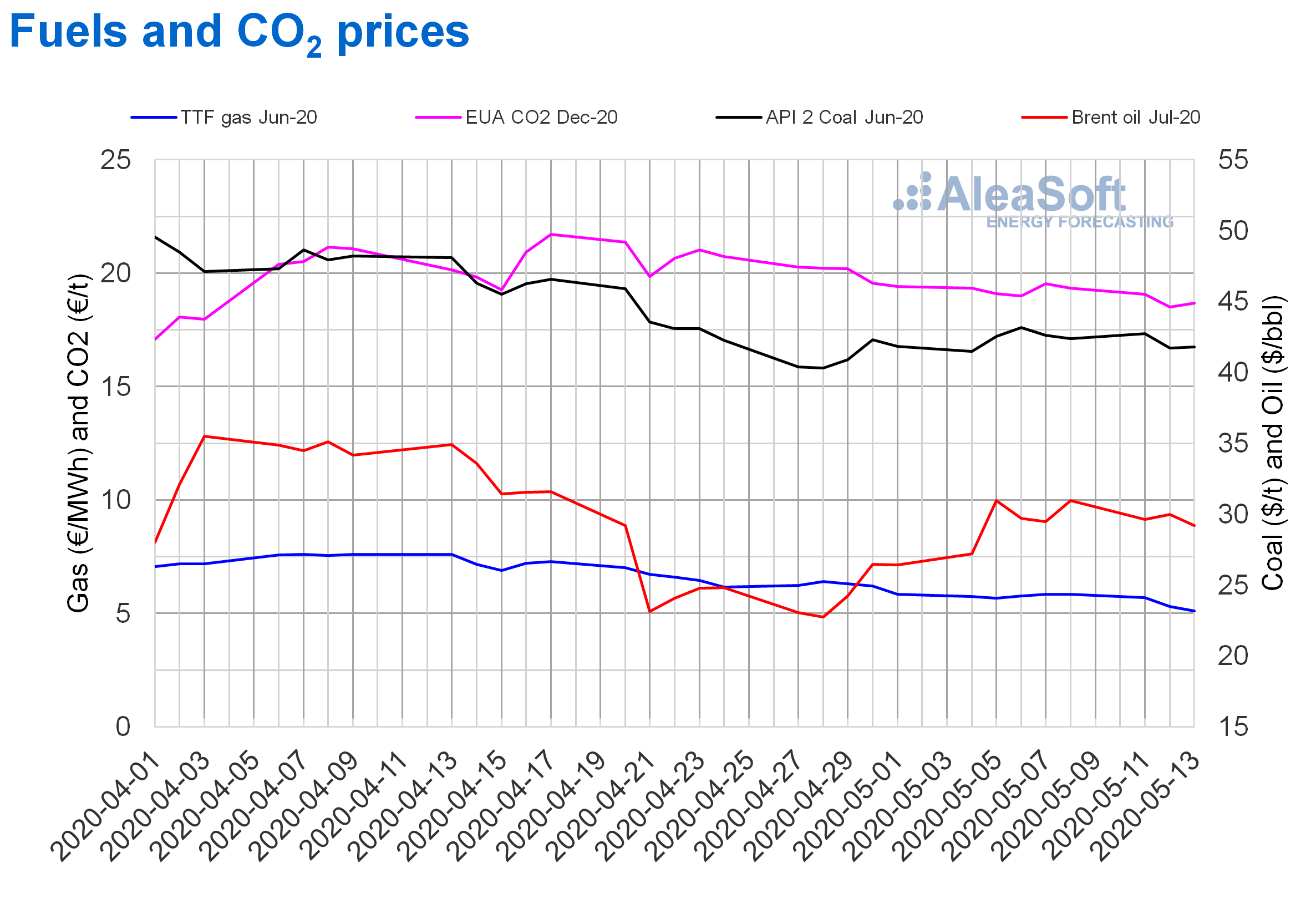 AleaSoft publicly offers the energy markets observatories on its website. The variable of hydroelectric energy production was recently added to the observatory of the MIBEL market of Spain.

At the same time, there are only a few days left for the second webinar on the influence of the coronavirus on the energy demand in Europe, which will be held on May 21 and in addition to providing updated data and forecasting, it will be also focused on renewable energies projects financing and their perspectives at the moment. On this occasion, at the end of the webinar there will be a discussion and questions session to delve into the topic in a more interactive way with all the participants.