AleaSoft Energy Forecasting: Witnesses to the energy transition during the last 22 years

AleaSoft Energy Forecasting, October 22, 2021. Last October 8 was the 22nd anniversary of AleaSoft Energy Forecasting. In all these years the company witnessed the transition of the Spanish electricity sector, which went from being dominated by coal energy production initially, to having almost zero participation in this technology in recent years, and how other technologies that will be key during the energy transition in the coming years appeared and took the witness: combined cycle gas turbines, wind energy and solar photovoltaic energy.

On October 8, AleaSoft Energy Forecasting celebrated 22 years since its creation. In all this time, the company witnessed the transition that the electricity sector in Spain experienced, practically since the liberalised electricity market began to operate.

In the early years, companies needed good forecasts of electricity demand and market prices, at the short‑, mid‑ and long‑term, and the large electricity companies of Spain, Endesa, Iberdrola, Unión Fenosa and Viesgo, relied on the products and services of AleaSoft Energy Forecasting.

In this first stage, coal led the electricity production of Mainland Spain, followed by the nuclear energy and the hydroelectric energy, and CO2 emissions from the electricity sector were on the rise. In turn, the demand was registering a period of increase, along with the growth of the economy. 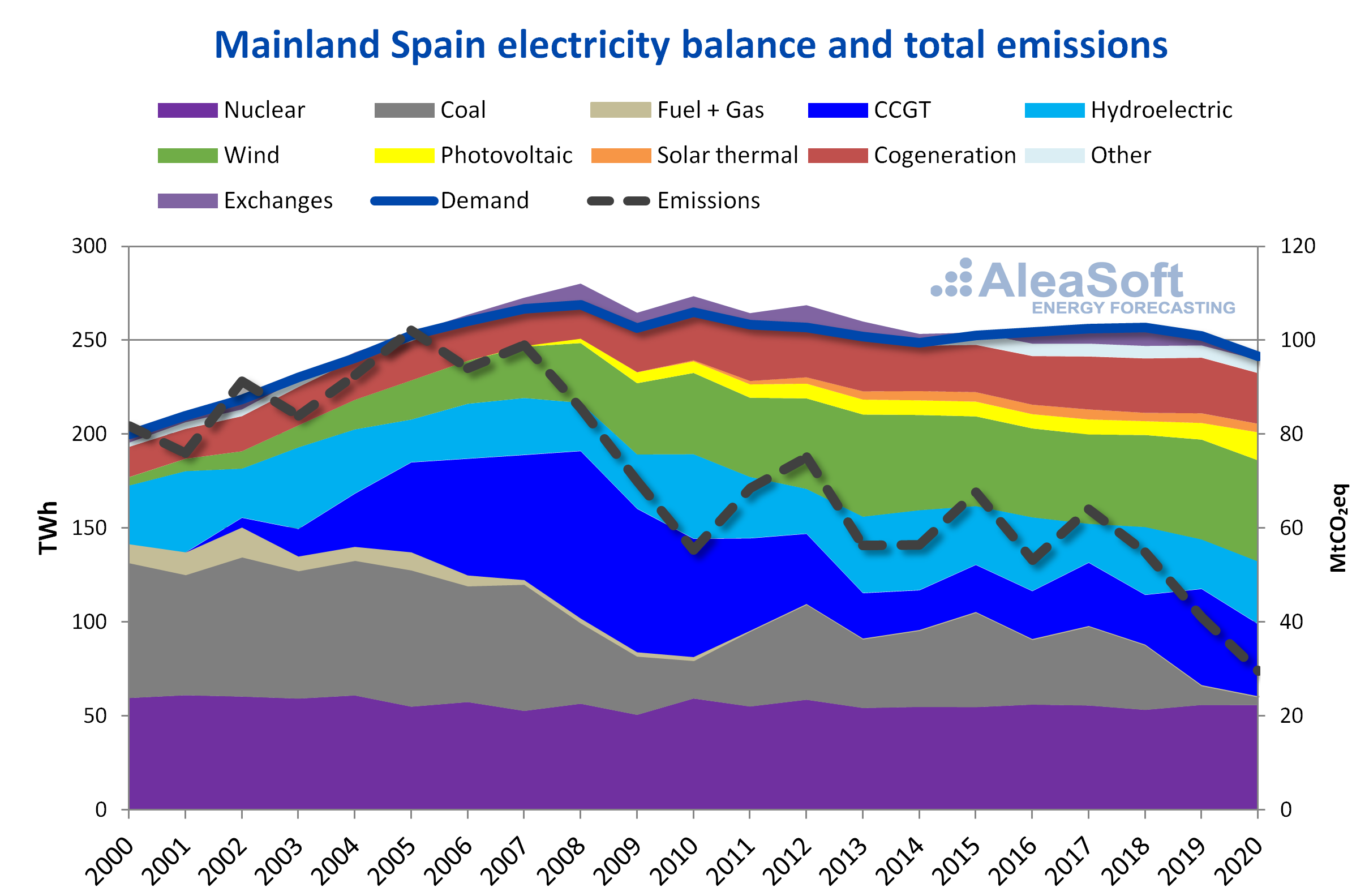 Starting in 2002, combined cycle gas turbines burst into the Spanish electricity generation mix, and between 2008 and 2010 they were the technology that contributed the most electricity, displacing coal to third or fourth place, behind the nuclear energy, and even the hydroelectric energy in 2010. Also in these years, wind turbines began to be installed on a massive scale and wind energy production began to position itself among those with the highest volume in the Spanish peninsular mix, generally in second position, although in the year 2013 it won the first place. Since 2011, the nuclear energy production occupied the first place in the mix of the Spanish peninsula almost uninterruptedly, demonstrating the importance of this technology as a base power during the energy transition process.

As of 2008, with the arrival of the economic crisis, and later due to the increase in energy efficiency, the continuous growth of electricity demand was halted. This year also marked a turning point in the polluting gases emissions from the electricity sector, also associated with the economic crisis in the first instance and with the increase in renewable energy generation to the detriment of coal energy production, which has already been drastically reduced in 2020 and 2021.

In this second stage, AleaSoft Energy Forecasting began to work for companies related to combined cycle gas turbines and wind energy such as Gas Natural, Bahía Bizkaia Electricidad, Shell, Electrabel, Gamesa, Acciona, among others, providing them with short‑ and mid‑term demand, prices and wind energy generation forecasts, both at the wind farm level and aggregated at the peninsular level.

At this stage, the company also began to work with electricity grid operators from several European countries, among which REE (Spain), Terna (Italy), Statnett (Norway), Elia (Belgium) and FEDA (Andorra) stand out, providing them with forecasts of national and regional electricity demand from the very short‑term, that is, from the first 48 to 72 hours, to the mid‑term.

Starting in 2008, the solar photovoltaic energy production began to gain ground in Mainland Spain. They were the first steps of a photovoltaic revolution that, in recent years, thanks to the fall in costs of this technology, took a great boost. The production growth data for 2020 and so far in 2021 demonstrate this.

In recent years, the fight against climate change has been the motor for European governments to define strategies in order to eliminate greenhouse gas emissions by 2050. In the case of Spain, the Integrated National Energy and Climate Plan (NECP) sets the objective of increasing the solar photovoltaic and wind energy capacity to around 39 GW and 50 GW, respectively, in 2030. In order to finance all this new renewable energy capacity, PPA (Power Purchase Agreement) began to proliferate and in 2021 renewable energy auctions were resumed in Spain, without leaving aside 100% merchant projects.

Since 2017, AleaSoft Energy Forecasting began working for companies related to the development and operation of photovoltaic parks in Spain and the rest of Europe, providing them with long‑term electricity market prices forecasts. The hourly detail of these forecasts makes it possible to calculate the future income of the plant, which is essential in financing processes when estimating the return on investment. This hourly breakdown of the forecasts is also necessary for the accounting of renewable PPA. AleaSoft Energy Forecasting‘s long‑term forecasts also include confidence bands that represent a scientific measure to quantify the risk or probability that the price will fluctuate above or below a value.

AleaSoft Energy Forecasting: Witnesses to the energy transition during the last 22 years

During the last 22 years, the electricity system went from being dominated by coal energy production during the first years to almost zero participation in this technology since 2020. In this period, new technologies were developed, such as combined cycle gas turbines, cogeneration, wind energy and solar photovoltaic energy, which replaced the production with coal. The contribution of renewable energies in 2000 was only 19% and in 2020 it reached 47% and total emissions from the electricity sector reduced by 64% between these two years. The nuclear energy provided a base power throughout this time, which offered stability to the system and demonstrates the importance of closing these plants in an orderly manner so as not to affect the energy transition. The hydroelectric energy was another energy that was present throughout this period, also providing a stable volume of “clean” energy. Electricity demand continued to grow during the first years until it came to a halt with the onset of the crisis and then went on to a period of greater stability thanks to energy efficiency. From now on, wind and solar photovoltaic energy will be the protagonists of the future of the energy transition. 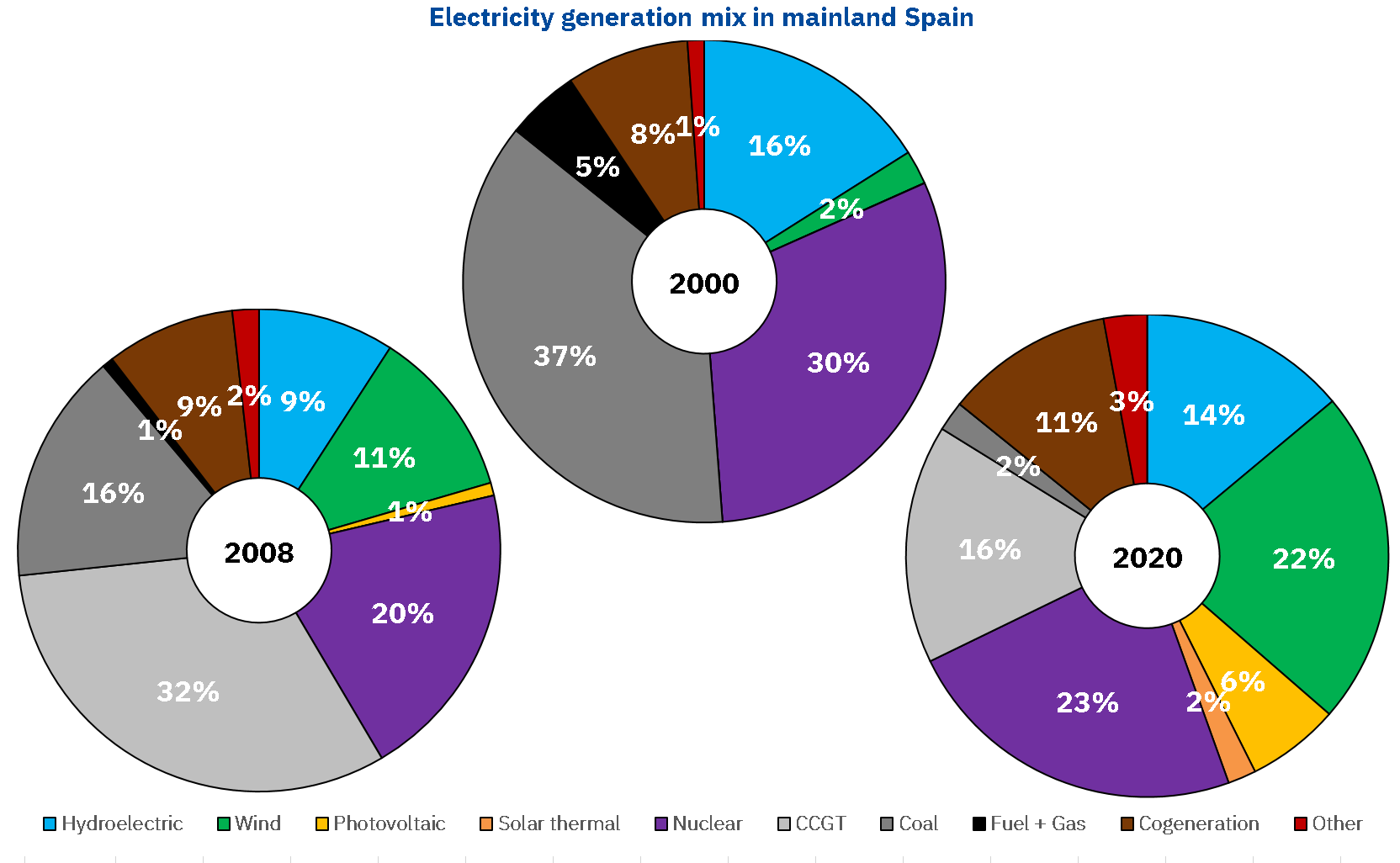 AleaSoft Energy Forecasting: Participants in the future of the energy transition

At AleaSoft Energy Forecasting they aim to continue being witnesses and participants in the energy transition over the next years, helping to build that future with net zero emissions together with the rest of companies of the energy sector. For this, at AleaSoft Energy Forecasting not only price forecasts for all European energy markets are offered, the Alea Energy DataBase (AleaApp) for the compilation, visualisation and analysis of markets data, as well as reports on different topics of the energy sector are also provided and dissemination work is carried out on current issues through news, workshops and webinars in which important companies of the European and global energy sector, consulting and service companies and financial entities participated, such as Deloitte Spain, PwC Spain, EY, JLL, Vector Renewables, Engie Spain, Axpo, Banco Sabadell and Triodos Bank.

The next AleaSoft Energy Forecasting’s webinar will be held on November 11, with the participation of invited speakers from Engie Spain. In the webinar, the usual analysis of the evolution of European energy markets in recent weeks, which were characterised by the global energy crisis, and of the renewable energy projects financing will be carried out.