What was analysed about PPA in the AleaSoft’s webinars

AleaSoft, June 4, 2021. The PPA are being, and will be, one of the protagonists in the decarbonisation of the electricity system and in the energy transition in general. Given their current relevance, it is understandable that it is one of the topics that were dealt with from all possible points of view in the webinars regularly organised by AleaSoft.

More than twelve months passed since the webinars organised by AleaSoft began to address the issue of the PPA and their role in the renewable energy projects financing. Some of the most important companies in the energy sector in Spain and Europe, and even worldwide, attended these events. These include international consulting and service companies such as Deloitte, PwC Spain, EY and JLL, multinationals of the energy sector such as Engie, Axpo and Vector Renewables, and financial entities such as Banco Sabadell and Triodos Bank. The recordings of all the webinars are available at this link.

The importance of the PPA in the renewable energies financing and, consequently, in the decarbonisation of the electricity sector made them one of the most present topics in the news and events of the sector. Here are some of the aspects of the PPA that were analysed by the experts over the last few months in more than nine webinars.

In the depths of the crisis

During the months immediately after the outbreak of the coronavirus crisis in Europe, April and May 2020, although there was a slight slowdown in investments in renewable energy projects, the experts agreed to send a message of optimism. The very low prices that were registered in those months in the European electricity markets also affected the PPA prices and made these projects less attractive for investors and many sponsors preferred to wait for the uncertain situation to improve. Anyway, the financing of new projects continued. Although it was at a slower pace, there were sponsors looking for opportunities and the banks continued to offer financing.

In those months of deep global crisis, it was possible to see how, despite delays and less favourable conditions for financing, the developments of new parks continued and the electricity sector showed enormous strength when many other sectors suffered terrible drops that will affect their evolution in the mid‑ and long‑term.

As the number of renewable energy projects in the market without aid increased, so did the need to protect against the volatility in market prices in order to have long‑term income stability, a very important condition when it comes to obtaining financing. In this scenario, the PPA positioned themselves as one of the best options when it comes to mitigating the market prices risk.

Taking into account the greenhouse gas emission reduction targets set by the European Union for 2030 and the increase in renewable energy capacity expected in the next decade, the growth in the number of PPA contracts signed in Europe in recent years is not surprising. 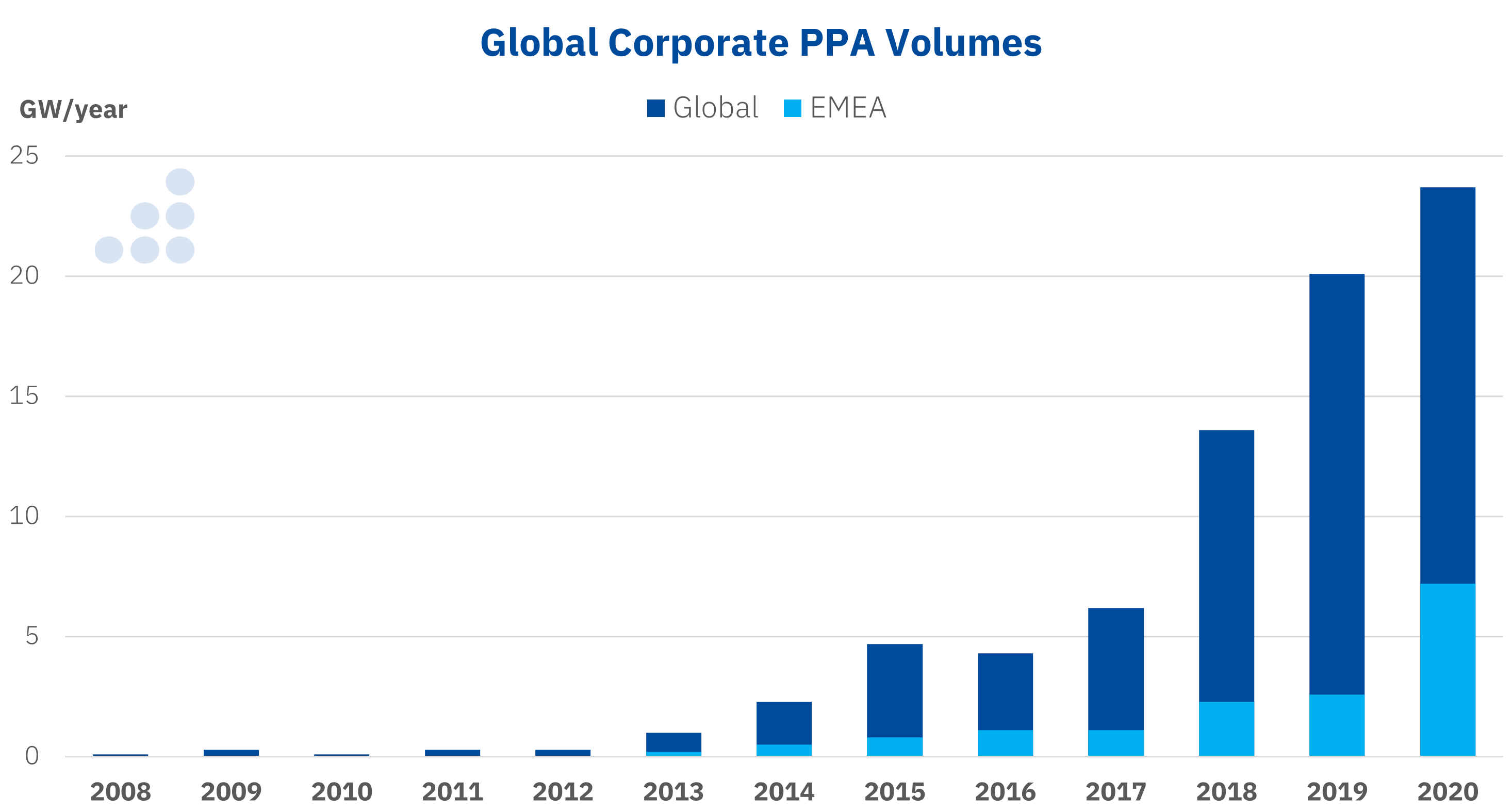 Another aspect that was highlighted in practically all webinars was the need for market prices forecasts. To plan a PPA it is necessary for both parties, producer and consumer, to have a proper and educated vision of the future of the market based on reliable long‑term hourly prices forecasts. An hourly prices forecast allows estimating the price captured from the production profile of the facility or the consumption profile of the consumer. In this way, the long‑term income and costs can be estimated, essential data in any financial model.

Instruments such as confidence bands offer a probabilistic metric to the price forecasts that allow long‑term risk management, necessary as inputs to the risk management models.

The coexistence of PPA and renewable energy auctions

When the renewable energy auctions returned to the Spanish electricity market, there was some concern about how this could affect the PPA market, and many of the questions of the webinars attendees went in that direction. The experts agreed that the impact on the PPA and their prices would be rather small, taking into account that auctions and PPA are two instruments with quite different characteristics and that leads to different price levels. Both, PPA and auctions, will coexist in the Spanish electricity market for a long time and, according to the experts, there is no doubt that the PPA will continue to be necessary in the long term.

Of course, due to the guarantees behind each one of them, the financing conditions for the projects granted in the auctions and that will be linked to the REER will be better than those of the projects that have a PPA. It must be borne in mind that the REER represents a PPA with the State, which is an offtaker with a high credit quality.

PPA for the consumers

On the consumer side, in addition to generally obtaining attractive prices in the PPA, it also allows them to meet their corporate social responsibility objectives by having the guarantees of renewable origin of the energy they will consume. According to the experts, this is an extremely important issue of image and responsibility, especially for large corporations, which should not be underestimated when estimating the consumers demand for PPA.

For the large consumers in Spain, the approval of the Statute of the electro‑intensive consumers will be a very important aspect for the PPA of these industries. The Statute obliges the electro‑intensive consumers to contract renewable energy PPA for at least 10% of their annual consumption and for at least five years. As a support mechanism, these PPA will have the endorsement of the state, transferring to the offtaker practically the highest credit quality that they can have, with the advantages that this will entail when it comes to negotiating very competitive prices.

In the next webinar organised by AleaSoft, next Thursday, June 10, there will be the participation of Fernando Soto, Director‑General of AEGE, precisely to debate and analyse the effects of the Statute of the electro‑intensive consumers on the PPA of the large consumers.