Assessment of Electricity Consumption in Europe for the year 2015

Information elaborated by AleaSoft, a leading company in the development of price and consumption forecasting models of energy markets

February 4th, 2016- The year 2015 was marked by a general increase in electricity demand compared to the previous year, with the exception of Great Britain.

Although we only have provisional GDP data for the fourth quarter of the year, 2015 was a year of economic growth in Spain, a fact that has been reflected in electricity demand. Over the past year, electricity consumption was 1.8% higher than in 2014, 1.6% after factoring in the influence of seasonal and working patterns, according to REE (Red Eléctrica de España). In the first three quarters, demand was higher than that of the same period in 2014, but the last quarter of the year was different due to the warmer month of December. It is appropriate to note that power consumption in July was 11.1% higher than during the same month of the previous year, a figure which falls to 5.5% after correcting the temperature effects and the working patterns; this substantial increase in consumption was due to the heat wave that hit most European countries during that month.

In France, as well as in Spain, demand grew during the first three quarters of the year compared to those of the previous year. However, once again high temperatures in December were the cause for the exception of the fourth quarter. Total interannual demand grew by 2.7%, while GDP is expected to have risen by 1.1% in 2015 compared to 2014, given that we already have the GDP data for the first three quarters.

Great Britain marks a difference, by reducing its annual electricity demand by 2.9% in 2015 compared to the previous year. With a positive economic growth, the cause of this decline in electricity consumption lies in the mild temperatures that the country has experienced since the spring of 2015. A warm December (as it’s becoming common in Western Europe) and a cool summer led to a decline in demand in all quarters, with the exception of the first quarter compared to 2014.

In Italy, the interannual electricity demand rose by 1.5% last year with an expected GDP growth of 0.8%. However, in July the aforementioned heat wave caused electricity consumption to be 13.72% higher than in the same period of 2014. Thus, we can see that the growth in demand in Italy is highly concentrated in that month, since the variation is much smoother for the rest of the months compared to 2014. 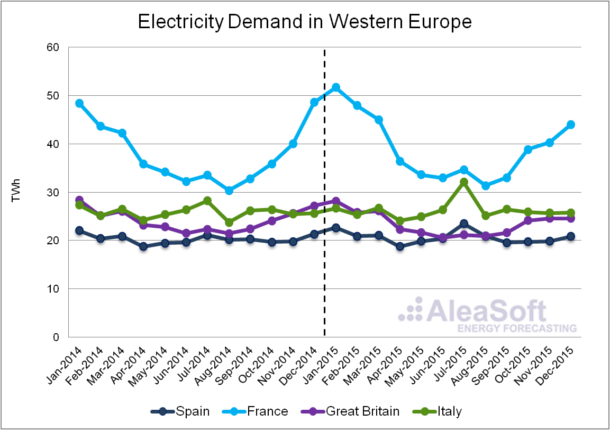 In general, in Western Europe a growth in economic activity is expected for the year 2016. For that reason, the results of the forecasting of electricity consumption, obtained by using the AleaSoft models, show a growth for the countries analyzed above.

In Spain, electricity demand is expected to grow in 2016, considering an annual GDP growth scenario of 2.7%.

In France, the electricity consumption expected for 2016 is higher than that of 2015, taking into account a GDP growth of 1.3%.

In the case of Great Britain, electricity demand is expected to grow this year, taking into account an annual GDP growth of 2.2% for the UK.

Finally, in Italy electricity demand is also expected to be higher than that of 2015, considering an interannual GDP growth of 1.3% for 2016.