Information elaborated by AleaSoft, a leading company in the development of price and consumption forecasting models of energy markets

February 8th 2016- During 2015, the major European electricity markets had disparate behaviours, with the exception of the third quarter, when a heat wave hit the continent and caused a generalized increase in prices compared to the same quarter of the previous year. In annual terms, the MIBEL market and the EPEX SPOT-France market registered price increases linked to a growth in electricity demand; while, in the markets EPEX SPOT-Phelix and N2EX there were falls related to a drop in fuel price for electricity generation and, in the case of Germany, to an increase in wind power production. The Italian IPEX market didn’t undergo significant interannual variations, also backed up by the low variability of wind and hydro generation, as well as of electricity consumption compared to the previous year. 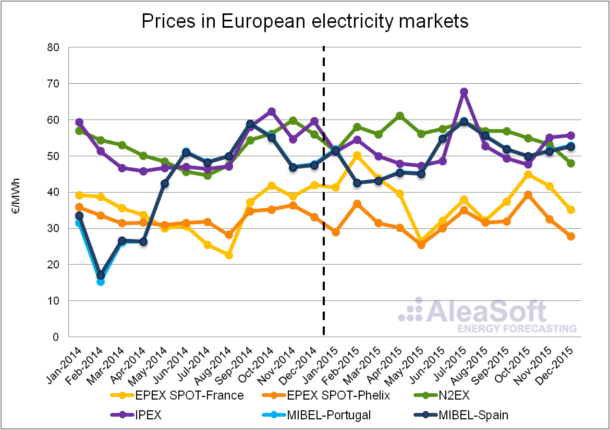 During 2015, the EPEX SPOT-Phelix market of Germany and Austria, with an average price of 31.76 €/ MWh, fell slightly by only 1.12 €/MWh compared to 2014. This decrease was more notable in the first half of the year, with a difference of 2.08 €/MWh compared to 2014. The only quarter in which the price rose, compared to the previous year, was the third, caused mostly by the heat wave. This rise was of 1.30 €/MWh.

In the British N2EX market the annual average price was of 40.43 £/MWh (55.72 €/MWh), falling by 1.67 £/MWh compared to 2014, due to the fall in price of the NBP gas, which is a reference in the country, as well as to a decline of 2.9% in demand compared to the previous year. The largest drop was registered in the fourth quarter compared to the same quarter of 2014, with 7.64 £/MWh. However, in the second and third quarter, the average price increased by 2.78 £/MWh and 2.72 £/MWh respectively compared to the same quarters of 2014. In the graphic these declines are not seen due to the fact that the euro fell by 11.04% against the pound, causing the annual average price to grow in 2015, measuring in euros.

AleaSoft’s price forecasting of electricity markets for the year 2016

AleaSoft foresees that in 2016 electricity price will decrease for the main European markets in a general way.

The average price of Brent crude oil fell sharply in 2015, falling by $ 46.63 compared to 2014. The “black gold” was quoted at 35,98 $/bbl, the minimum price since 2008. During all months of the year, the price was dramatically lower than in the same months of 2014, with a minimum difference of 24.22 $/bbl in December, and the maximum of 60 $/bbl in January. The fall of the price of Brent crude is mainly due to OPEC’s refusal to reduce oil production and to the fall in demand caused by the economic slowdown that China suffered, one of the world’s largest consumers of this product.

The price of gas, both Zeebrugge gas and NBP gas declined persistently during 2015. While the price drop was constant, the average annual price does not reflect it compared to the previous year, as in 2014 the price suffered a sharp drop during the summer months. The average price of Zeebrugge gas in 2015 was of 19.83 €/MWh, just 1.12 €/MWh less than in 2014 and, in the case of NBP gas it was of 14.62 £/MWh, 2.50 £/ MWh less than in the previous year. 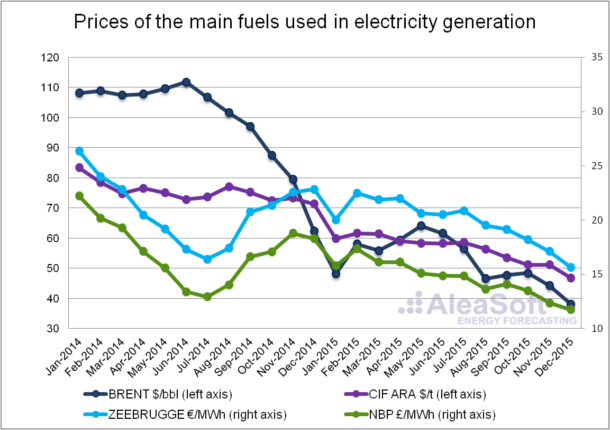 The average price of CO2 emission rights has increased by 1.68 €/t compared to 2014 and stood at an average annual price of 7.69 €/t; with a clear upward trend, the average price in December reached 8.29 €/t. Aleasoft expects the price to decline compared to the end of 2015. 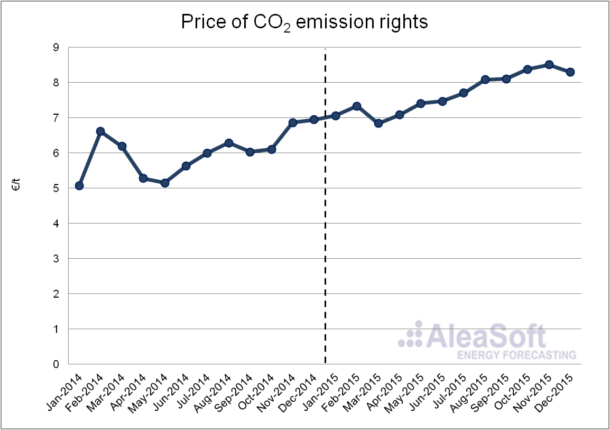