Energy efficiency: what changed since the record for electricity demand in 2007

AleaSoft, January 12, 2021. The cold snap brought records for prices and electricity demand. Comparing the hourly demand record in Spain for the last nine years registered on January 8 with the historical record of 2007, interesting conclusions can be obtained on the evolution of the energy use and the energy efficiency.

However, this last value is still far from the historical record for hourly demand. This title is held by December 17, 2007, when between 7:00 p.m. and 8:00 p.m., the demand climbed to 44 876 MWh. But it is worth asking what changed between 2007 and the present, and what can be produced with that electricity. 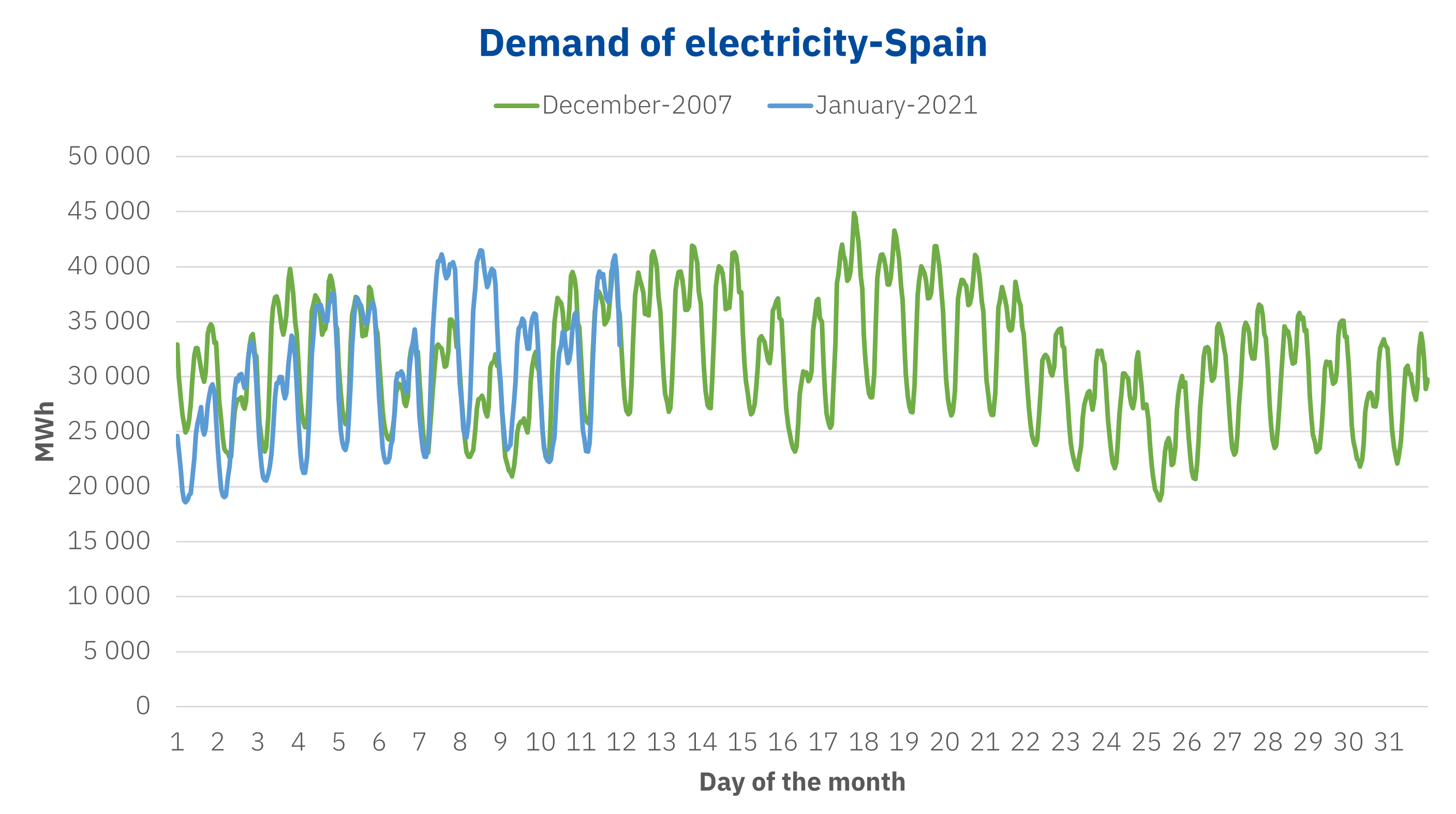 One of the most revealing charts is the one that compares the electricity demand with the gross domestic product (GDP). This comparison for Spain can be seen in the following graph. It is logical that the more a country produces, the more energy it will need to consume, and that is the perfectly linear relationship observed between the Spain’s GDP and its electricity consumption until 2014.

Starting in 2015, a radical change in the energy use is revealed. The GDP begins to rise after the decline of the economic crisis of 2008 and, logically, so does the energy consumption. But it is clear looking at the graph that the proportionality clearly changed. 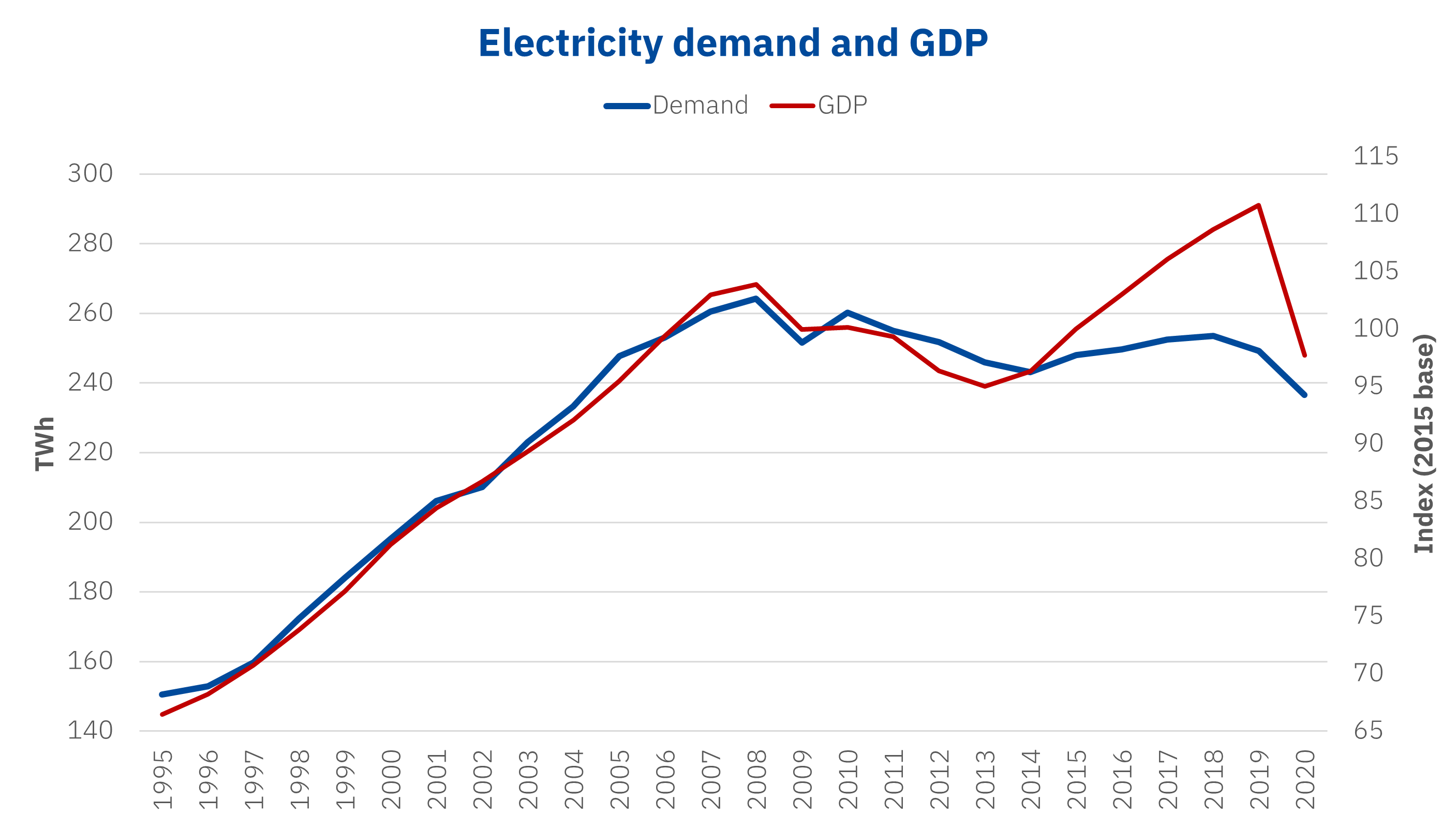 There aren’t enough data for 2021 yet, and 2020 is a bad year for any comparison for obvious reasons. But comparing GDP and demand between 2007 and 2019, the GDP grew by 7.6% while the electricity demand fell by 4.3%. This difference is the result of the increase in energy efficiency. The energy efficiency is the one that allows doing more, in this case producing goods and services, using less energy, in this case consuming less electricity.

The energy efficiency in the energy transition

The energy efficiency will play a key role during the energy transition towards a fully decarbonised economy, neutral in greenhouse gas emissions. In the long term, the electricity demand is expected to increase due to the electrification of the transport, with the electric vehicles, the industry, the heating, and also due to the production of green hydrogen as a source of energy storage and as a fuel.

But all this increase in demand will increasingly have to be covered solely by renewable energy sources. The energy efficiency will allow the volume of the demand to be covered only with renewable energies, but the energy efficiency will also provide flexibility to the demand so that it can adapt to the intrinsic variability of energies such as the photovoltaic or the wind energy.

The renewable energy projects financing in Europe from 2021

For the energy transition to be a reality, it is necessary that the renewable capacity objectives set in the Energy and Climate Plans of the European Union countries are met, and for this it is essential that the renewable energy projects can obtain financing for their construction and exploitation. Topics like these are covered in the webinars that are regularly organised at AleaSoft.

This Thursday, January 14, the second part of the series of webinars “Prospects for the energy markets in Europe from 2021 (II)” will be held, with the participation of speakers from the consulting company PwC Spain who will analyse the vision of the PPA market from the consumer point of view.

The third part of this series is scheduled for the next February 18, and this time it will have the collaboration of ENGIE, to analyse the prospects of the energy markets and the financing of the renewable energy projects from this 2021.

The monitoring of the evolution of the prices and the demand in the European energy markets that are registering these records can be tracked daily in the energy markets observatories of the AleaSoft’s website.