Next Thursday 18, a new series of webinars begins, “Prospects for the energy markets in Europe. Spring 2021”, organised by AleaSoft. This first part of the series will feature the presence of speakers from EY, one of the “Big Four” and therefore one of the world leading consulting, financial advisory and auditing companies.

In addition to the usual review of the evolution of the energy markets in Europe, during the webinar and the subsequent analysis table the prospects for these markets in the medium and long term, the main novelties in the regulation of the energy sector, the financing of renewable energy projects, the importance of the PPA and the international business opportunities of the Spanish renewable energy companies will be analysed.

The speakers of the webinar will be Oriol Saltó i Bauzà, Manager of Data Analysis and Modelling at AleaSoft, Antonio Hernández García, Partner of Regulated Sectors at EY and Javier García Seijas, Partner of Infrastructure, Modelling & Project Finance at EY. At the subsequent analysis table they will be accompanied by Antonio Delgado Rigal, CEO of AleaSoft, Julien Saigault, Global Renewables Program Leader at EY, Antonio Martinez Mozo, Partner of Corporate Finance at EY and Inés Bargueño Sánchez, Director of Transformation Architecture at EY. 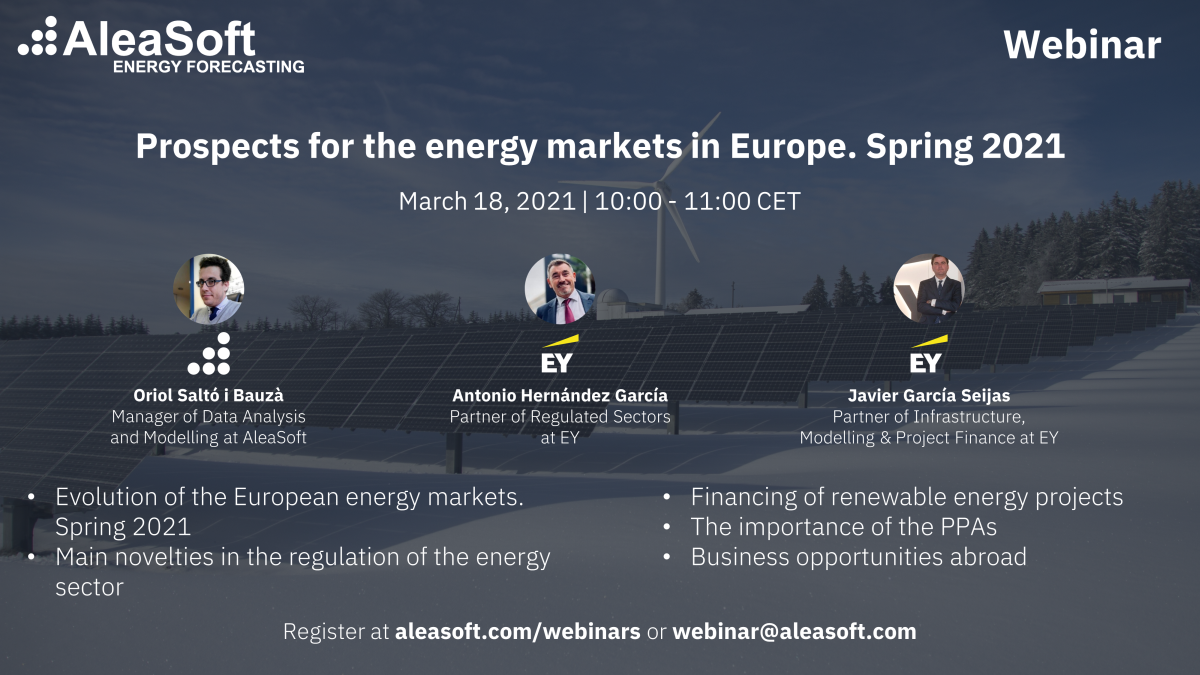 During the webinar, the experts from EY will show which may be the international opportunities for the Spanish renewable energy players, with special attention to the regions with the highest profitability, and to the ongoing expansion and geographic diversification of the European utilities, developers and large oil and gas companies in different renewable energy markets with promising prospects.

Evolution of the energy markets in Europe

After the most difficult moments of the third wave of the COVID‑19 pandemic in late 2020 and early 2021, the markets seem to have already got over the pandemic. The Brent oil, the TTF gas and the CO2 emission rights prices are on a clear upward trend, with the latter setting historical records.

The electricity demand in the European countries is already fully recovered from the drops of the spring and the last quarter of 2020, but still below the levels of 2019 in most countries. As for the electricity markets, the prices already got over the falls registered in 2020 too and are already fluctuating around the levels prior to the crisis caused by the COVID‑19.

The importance of the PPA

The webinar will analyse the current financial conditions of the projects of generation from renewable energies with PPA, 100% merchant projects and projects awarded in the last renewable energy auction and which will be covered by the REER. The most relevant regulations and roadmaps related to the deployment of the renewable energy in Spain in the near future and an update of the European Funds will also be analysed.

Previously at AleaSoft other webinars were held in which the financing of the renewable energy projects was addressed taking into account the point of view of important companies of the energy sector, such as Engie, PwC Spain, Vector Renewables and Deloitte. In all these webinars, the importance of the long‑term price forecasting with a 30-year horizon and hourly breakdown to negotiate the conditions of a PPA, participate in the renewable energy auctions, in the audits and in the portfolio valuation was highlighted. The evolution of the European energy markets was also monitored, an analysis facilitated by the  Energy DataBase (AleaApp), in which the main variables associated with the markets are updated and compiled daily.

At AleaSoft the second part of the webinar “Prospects for the energy markets in Europe. Spring 2021” is being organised, which will be held on April 15, with the participation of speakers from Axpo this time. In this webinar the prospects for the energy markets in the medium and long term will be analysed. The new players in the financial markets to absorb the demand for financing, taking into account all the renewable energy capacity that is expected to be installed in the coming years, as well as the taking of positions regarding the climate change of the large stakeholders at world level will also be addressed. In addition, the corporate PPA will be analysed as a solution for both the industry and the development of the renewable energies.