AleaSoft, March 15, 2021. In the second week of March, the prices of most of the European electricity markets fell, favoured by the general increase in wind energy production and, in some markets, in solar energy production. In the markets of Belgium, Germany and the Netherlands there were even hours with negative prices. This occurred in a week in which the CO2 prices hit a historical record and the gas prices rose. In the electricity futures markets there were also increases.

During the second week of March, the solar energy production increased by 91% in the Spanish market and by 38% in the Portuguese market. In the French market, the production with this technology also grew, although to a lesser extent, by 6.8%. However, in the German and Italian markets there was a decrease of 23% and 12% respectively.

For the week that started on March 15, the AleaSoft‘s solar energy production forecasting points to a decrease in the markets of Spain and Italy compared to the previous week. In the German market, the production is expected to be higher than that registered the previous week. 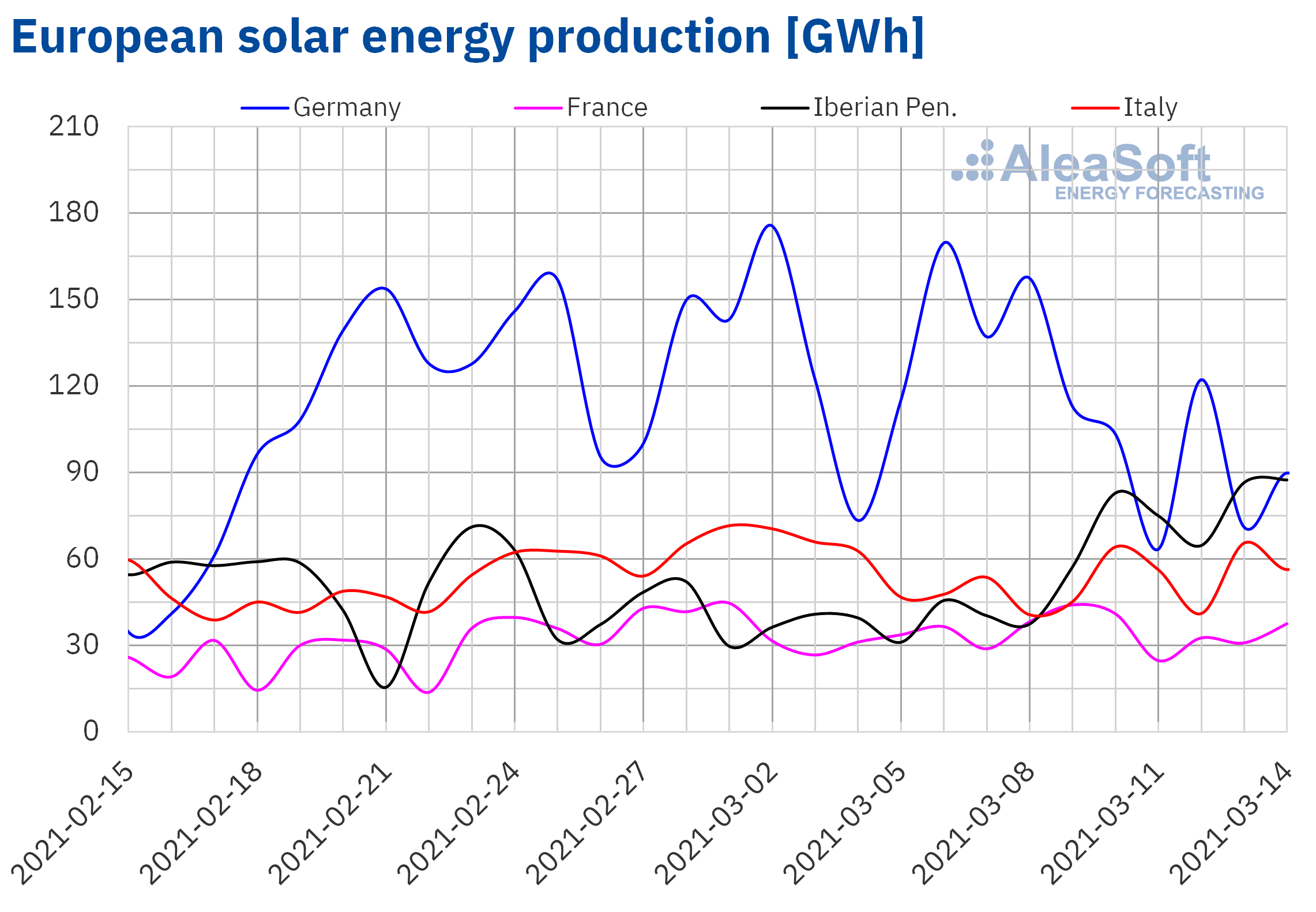 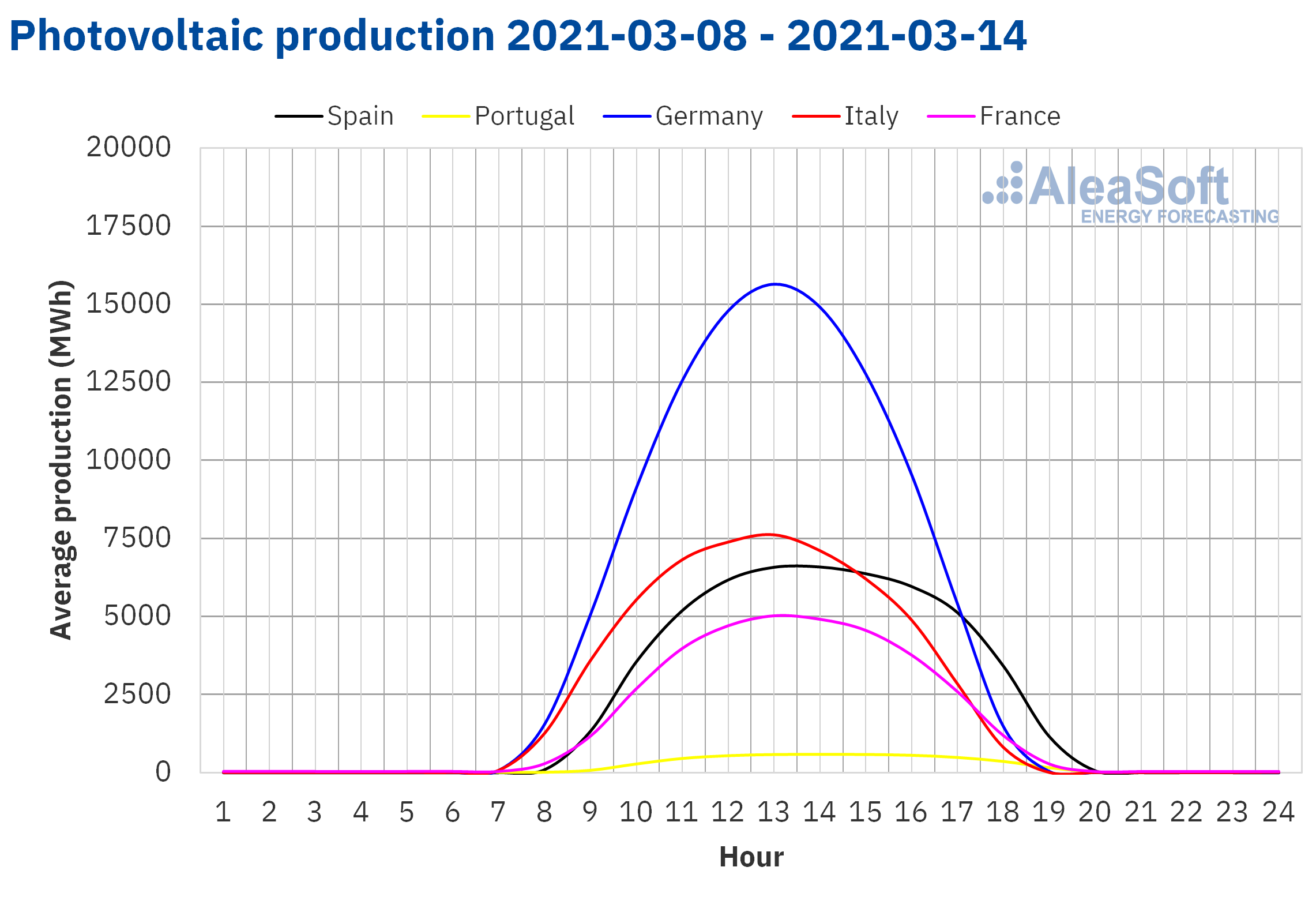 During the week of March 8, the wind energy production increased in all the markets analysed at AleaSoft compared to the previous week. In the German market, the production with this technology tripled that of the previous week and in the markets of France and Italy it was more than double that registered during the first week of March. In the German and French markets, the March 11 production, of 1020 GWh and 312 GWh respectively, was the highest in 2021 so far. In the Iberian Peninsula there was also an increase of 30%.

For the week 11 of 2021, the AleaSoft‘s wind energy production forecasting indicates that this will be higher than that registered the previous week in the Iberian Peninsula. On the contrary, a reduction in production is expected in the markets of Germany, France and Italy. 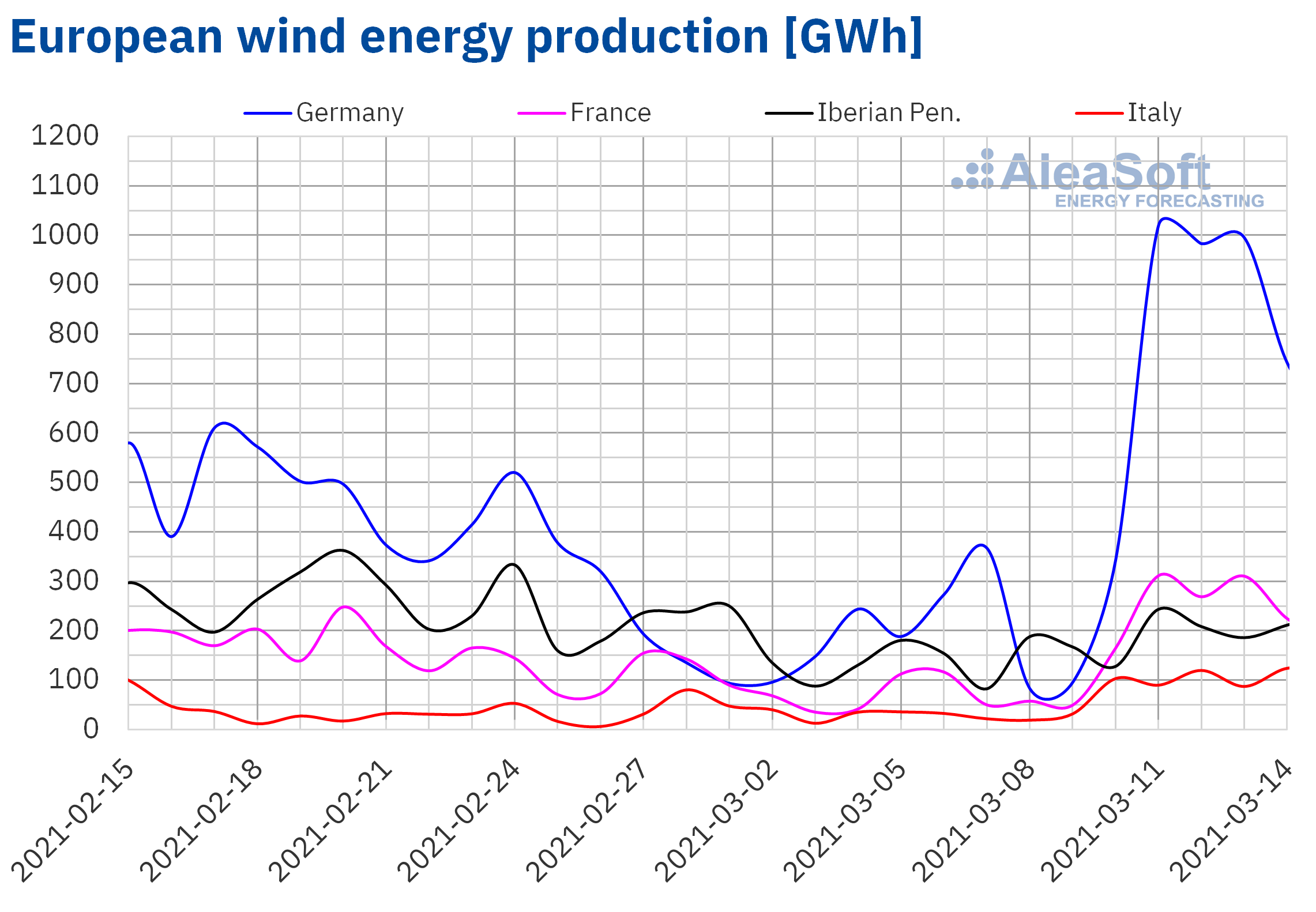 The electricity demand of the European markets behaved unevenly during the week of March 8. In the markets of France, Germany and Italy, increases were registered compared to the previous week of up to 5.5% in the case of the German market. While, in Belgium, Portugal and Spain, there were falls lower than 2.0%. A separate case was the 10% fall in Great Britain, caused by the increase in average temperatures, of almost 3.0 °C.

The AleaSoft‘s demand forecasting indicates that it will rise in most European markets in the week of March 15, as temperatures are expected to drop on the continent. 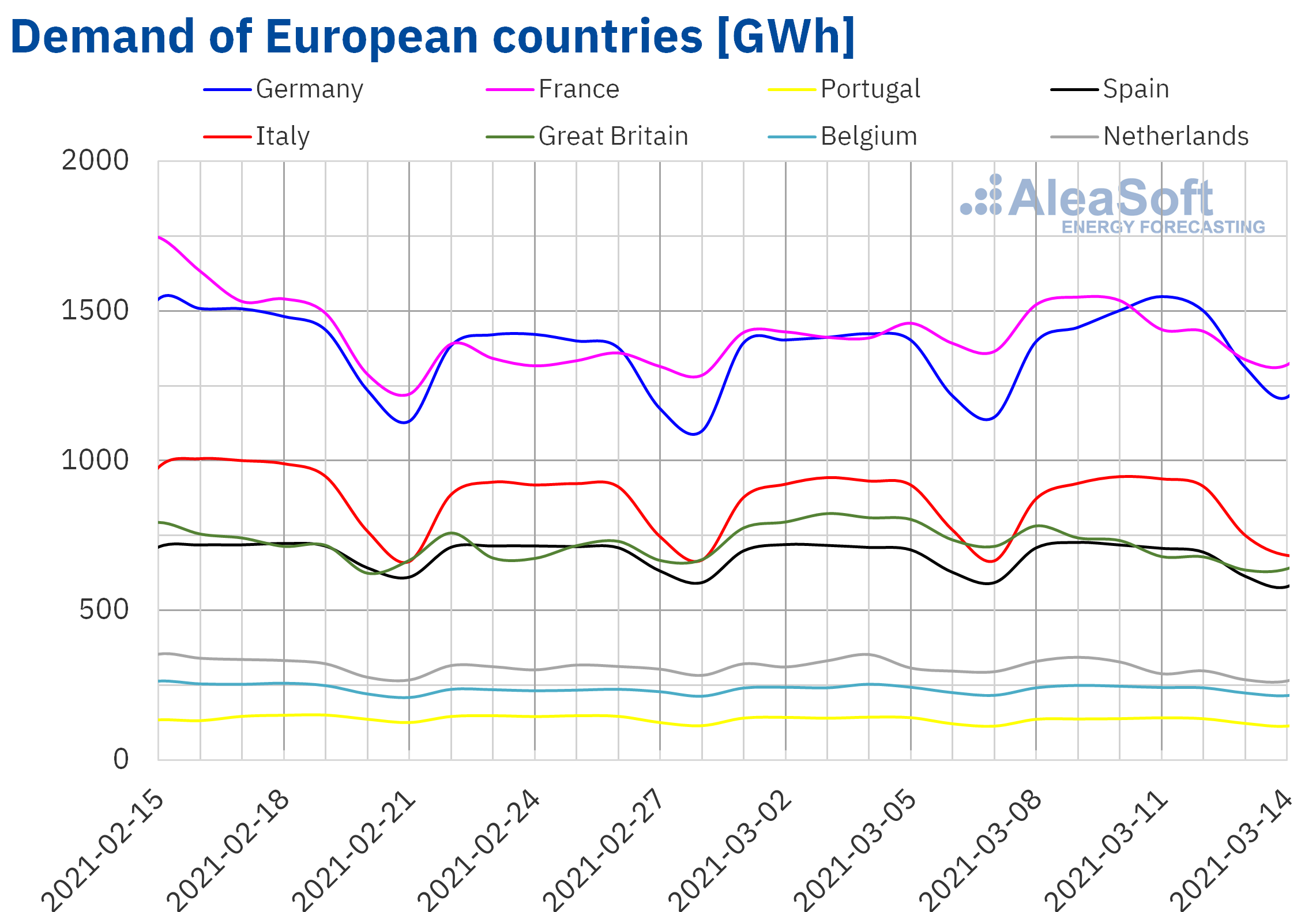 In the second week of March, the highest weekly average price was that of the N2EX market, of €63.09/MWh, followed by that of the Italian market, of €57.87/MWh. While the Belgian market registered the lowest average, of €34.58/MWh. Similar averages were reached in the Nord Pool and German markets, of €35.76/MWh and €35.82/MWh, respectively. In the rest of the markets, the prices were between €42.91/MWh of the MIBEL market of Spain and €44.76/MWh of the market of the Netherlands.

On the other hand, in the second week of March, the lowest daily price, of €0.25/MWh, was reached on Thursday, March 11, in the Belgian market. This daily price was the lowest in this market since May 2020. Furthermore, on that day, there were twelve hours with negative prices in Belgium. In total, during the second week of March, negative hourly prices were reached four days in the Belgian market. Negative hourly prices were also registered for three days in the German market and one day in the market of the Netherlands. 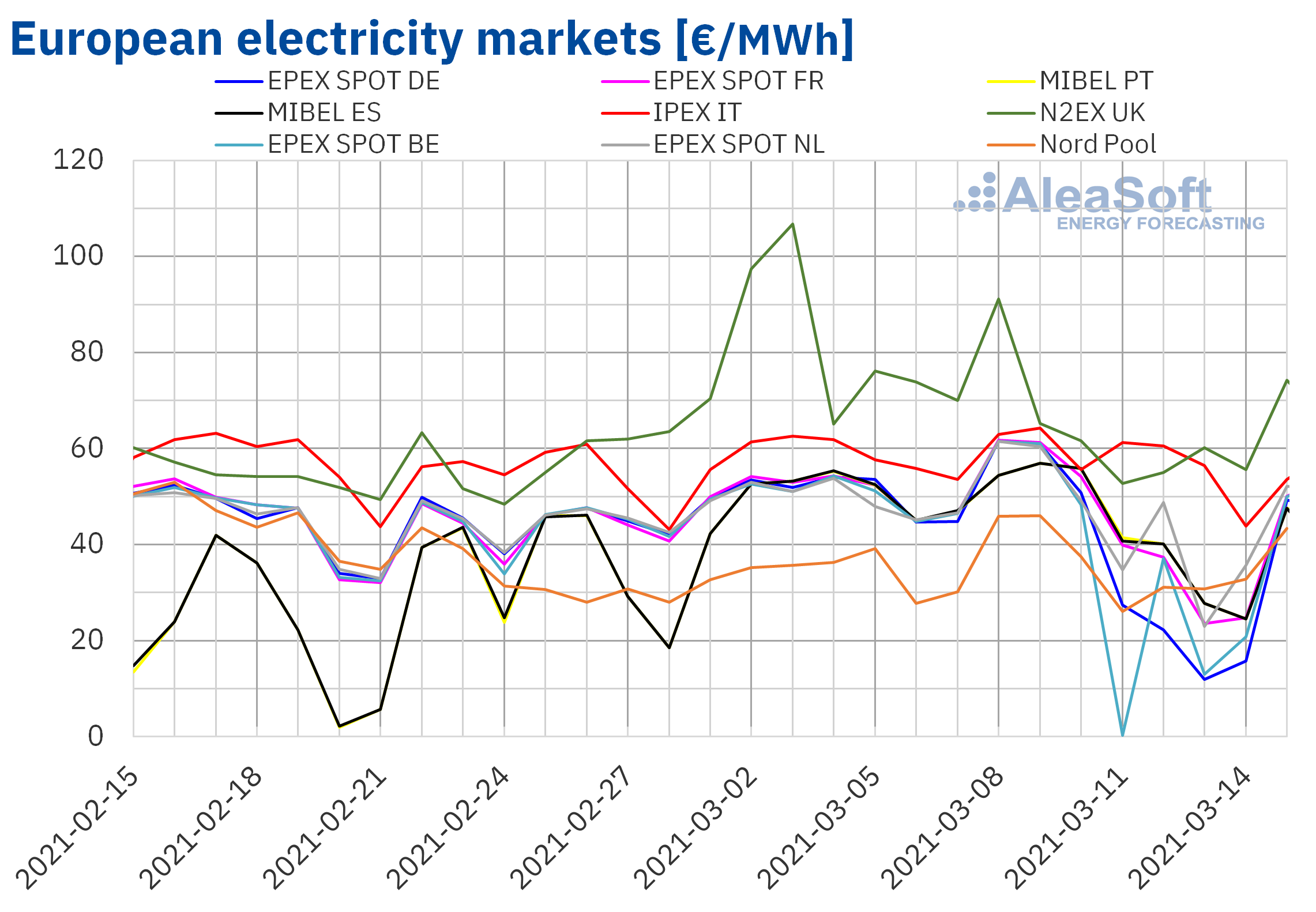 The AleaSoft‘s price forecasting indicates that in the week of March 15, the prices will recover in most European markets due to the drop in temperatures and the reduction in wind energy production in countries such as Germany or France. However, in the Iberian market the prices may continue to fall, favoured by the increase in wind energy production. 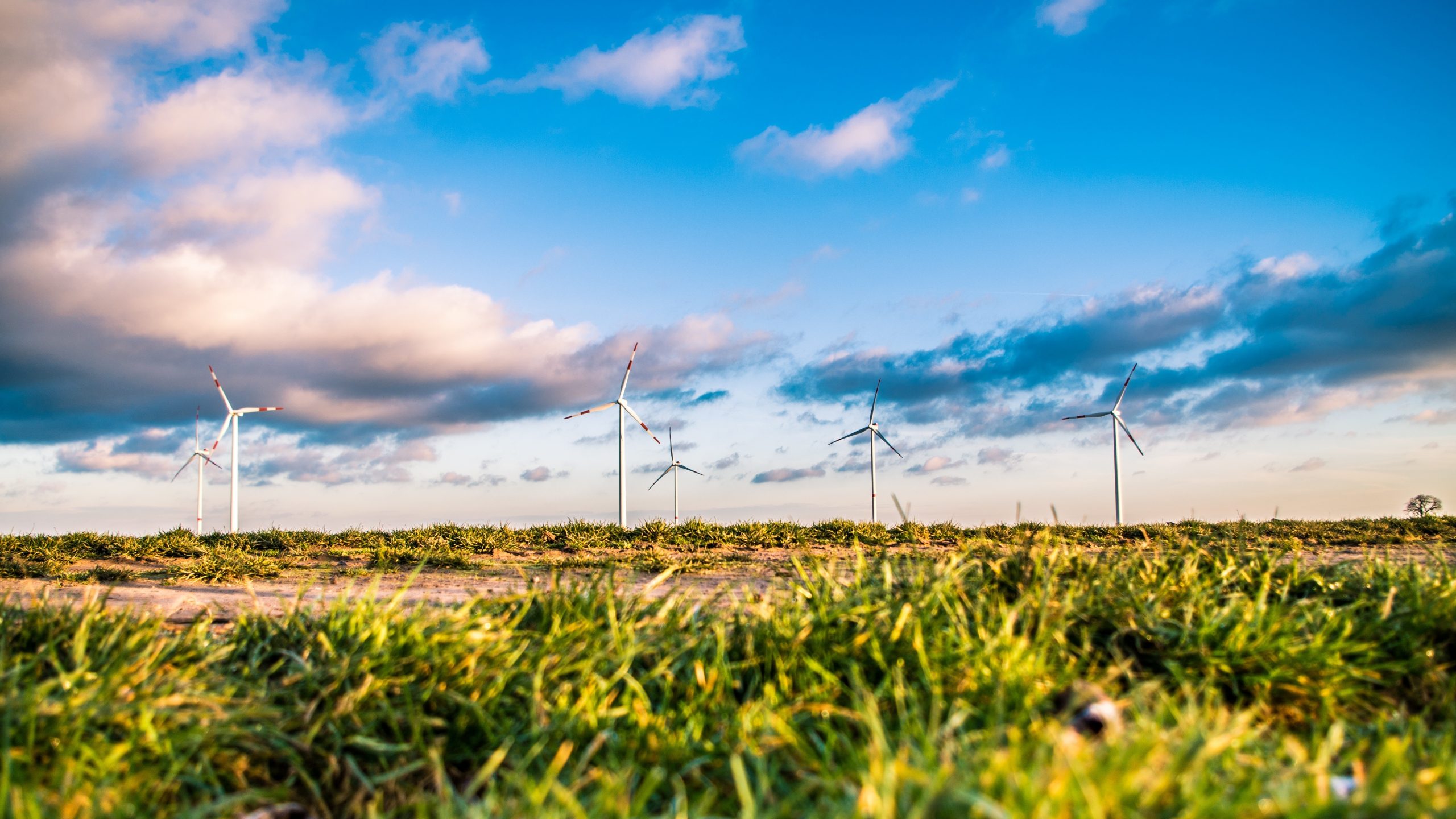 The second week of March brought a sharp rise in prices of the European electricity futures markets analysed at AleaSoft. In the product of the second quarter of the current year, as usual, the leaders of the price variations were the Nordic countries, which registered a rise of 13% in both the ICE market and the NASDAQ market, if the settlement prices of the sessions of March 5 and 12 are compared. However, the EEX market of Germany, France and Italy and the ICE market of Belgium and the Netherlands followed them closely with increases in all cases of more than 10%. The EEX market of Spain was the one with the lowest variation with a rise of 5.6%. In absolute terms, the EEX market of Italy was the one with the highest increase, when the session of Friday, March 12, settled with a price higher than that of March 5 by €5.48/MWh.

Regarding the prices for the future of the calendar year 2022, a very similar situation occurred. The general rise was led by the NASDAQ market of the Nordic countries, with a 6.3% increase, followed by the ICE market of the Nordic region and the Netherlands, with increases of 6.1% and 6.0% respectively. Once again, the EEX market of Spain was the one with the lowest variation with a rise of 3.6%. For this product, the EEX market of the United Kingdom registered the highest absolute increase, as the settlement prices increased between the analysed sessions by €3.18/MWh.

The Brent oil futures prices for the month of May 2021 in the ICE market began the second week of March with decreases. But on Wednesday and Thursday, the prices recovered until reaching a settlement price of $69.63/bbl on Thursday, March 11. This price was 4.3% higher than that of the previous Thursday and the highest in the last two years. On Friday, the settlement price was slightly lower, of $69.22/bbl.

The OPEC+ production cuts, the approval of measures to support the recovery of the US economy and the publication of the upward correction of the OPEC demand forecast for 2021 favoured the price increases of the Brent oil futures during the second week of March. In addition, the crude reserves of the United States decreased.

However, despite the progressive recovery in demand, the vaccination progress is slow and the evolution of the COVID‑19 pandemic will continue to negatively affect the demand levels in the coming months.

As for the TTF gas futures in the ICE market for the month of April 2021, most of the second week of March, the prices had an upward behaviour. Despite the fact that on Monday, March 8, they registered a settlement price slightly lower than that of the previous Friday, the rest of the week the prices increased. As a consequence, the settlement price of Friday, March 12, was €18.45/MWh, 13% higher than that of the previous Friday and the highest since the first half of January 2021.

Regarding the settlement prices of the CO2 emission rights futures in the EEX market for the reference contract of December 2021, the second week of March registered an increasing trend. As a result of the price increases, a settlement price of €42.85/t was reached on Friday, March 12, 9.8% higher than that of the previous Friday and the highest value registered so far. 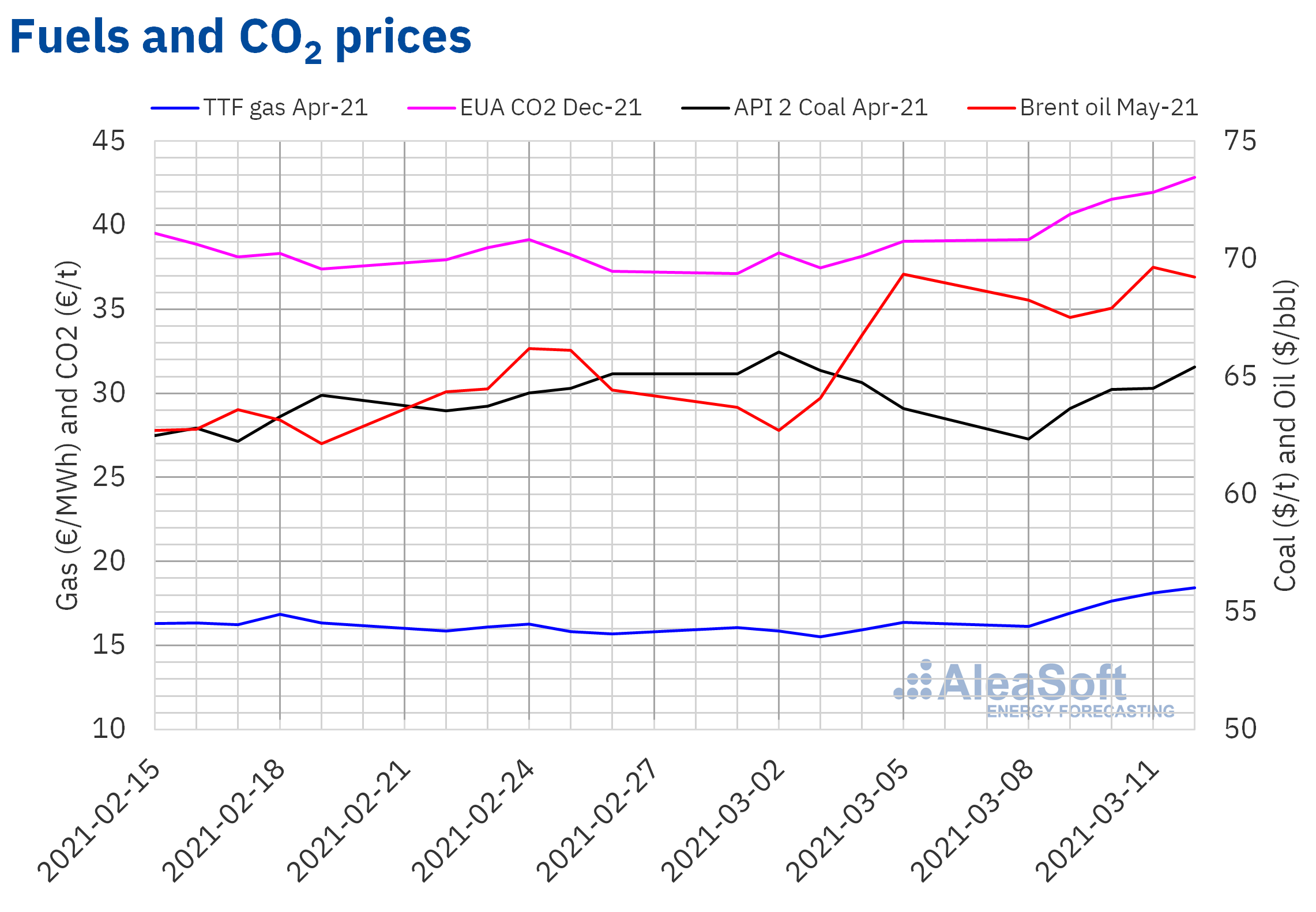 On Thursday, March 18, the webinar “Prospects for the energy markets in Europe. Spring 2021” will be held at AleaSoft. In addition to Oriol Saltó i Bauzà, Manager of Data Analysis and Modelling at AleaSoft, the following speakers from EY (Ernst & Young) will participate: Antonio Hernández García, Partner of Regulated Sectors and Javier García Seijas, Partner of Infrastructure, Modelling & Project Finance. In the webinar, the evolution of the European energy markets, the main novelties in the regulation of the energy sector, the financing of renewable energy projects, the importance of the PPA and the business opportunities in international markets for the Spanish agents will be analysed. In the second part of the Spanish version of the webinar there will be an analysis table, in which in addition to Oriol Saltó i Bauzà, Antonio Delgado Rigal, CEO of AleaSoft, Julien Saigault, Global Renewables Program Leader at EY, Antonio Martinez Mozo, Partner of Corporate Finance at EY and Inés Bargueño Sánchez, Director of Transformation Architecture at EY will participate.

In webinars organised at AleaSoft previously, topics of interest for the professionals of the energy sector in Europe were discussed, such as the PPA, both from the point of view of the consumer and the renewable energy producer, the financing and the bankability of the renewable energy projects, the account audits and the due diligence, and the renewable energy auctions. These webinars have included the participation of speakers from prestigious companies of the energy sector such as Engie, PwC Spain, Vector Renewables and Deloitte and the need to have quality long‑term price forecasting, scientifically based and with hourly price granularity in the thirty‑year horizon was highlighted.

At AleaSoft, in addition to the long‑term forecasting reports, there are mid‑term price forecasting reports, which take into account the most up‑to‑date scenarios for the evolution of the economy. In addition to the hourly forecasts for the next three years, forecasts with stochasticity are available, which contain the probability distributions of the monthly, quarterly and annual products included in the forecast horizon and a monthly simulations report that includes 1000 simulations of prices.

PrevAnteriorThe electrification of the transport sector: the great challenge for the decarbonisation and the development of the renewable energies
SiguienteFinancing, regulation and international opportunities for the Spanish renewable energy companiesNext
Menu
Facebook-f Twitter Linkedin Instagram