Spain is the paradise of the PPA in Europe

AleaSoft, March 19, 2021. In a short time, the number of PPA contracts signed in Spain grew considerably. However, this growth went unnoticed and, in the collective imagination of the professionals of the energy sector, Spain is not a country that stands out for the PPA. But analysing the numbers, the reality is very different and Spain is already the paradise of the PPA in Europe. This was one of the highlighted topics during the webinar organised by AleaSoft with the participation of EY.

Last Thursday, March 18, the first part of the webinar “Prospects for the energy markets in Europe. Spring 2021”, organised by AleaSoft with the participation of experts from EY, was held. The topics discussed during the event were several that will be summarised in future articles, but they covered from the regulatory novelties of the energy sector and the financing of the renewable energy projects under various remuneration schemes, to the global opportunities for the renewable energy companies in the regions with the best return on investment prospects.

The proliferation of the PPA in Spain

When thinking about PPA contracts, Spain is usually not the first market that comes to mind. Markets such as the United Kingdom or the Nordic countries are more famous in terms of the number of PPA that are signed. But, looking at the numbers, it is clear that the situation is not exactly like this or that, at least, it is changing.

The EY analysis shown in the webinar indicates that from 2019 to the first half of 2020, of the 140 PPA signed in Europe, 48 were with projects in Spain. This represents 34% of all long‑term contracts signed on the continent. In MW, they are more than 5 GW and represent more than 40% of the power of the signing projects, clearly ahead of the United Kingdom with 3 GW, while in the rest of the countries they do not reach 1 GW. 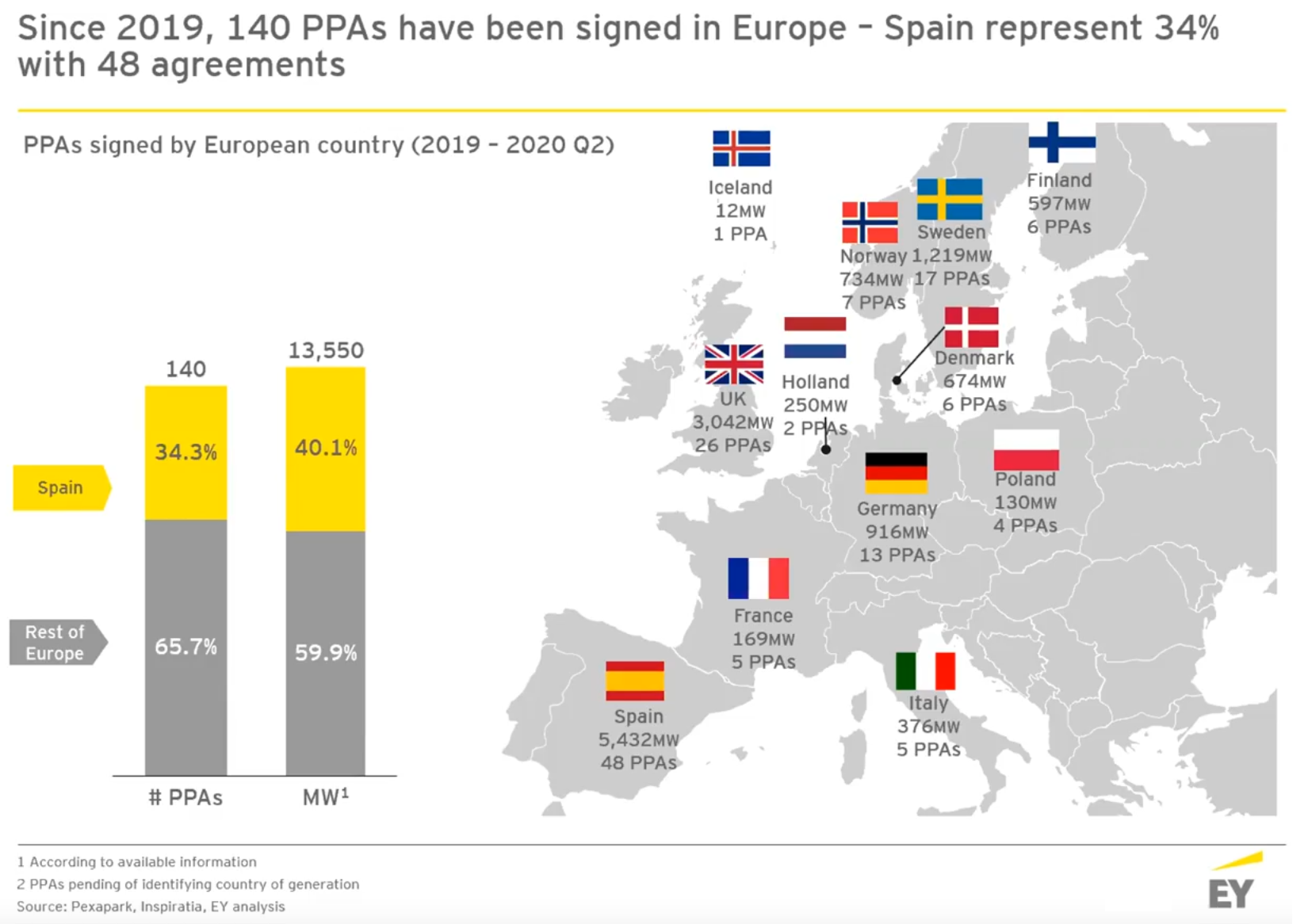 What makes the PPA in Spain so attractive?

It is clear that the renewable resource available in the Iberian Peninsula means that there are a large number of renewable energy projects that are candidates to sign a PPA. In addition, the solar resource, which is the one that Spain has the most, has a technology, the photovoltaic technology, which is very competitive and allows lower and more attractive prices for the offtakers. For this reason, 95% of the PPA was with photovoltaic energy projects.

The fact of having a wholesale market with a downward price trend in the medium term is also one of the factors that arouses the interest when signing a PPA in Spain. But beyond the prices, according to EY, the knowledge and the know‑how in renewable energies accumulated in Spain, thanks to being one of the pioneer countries in the first revolution of the renewable energies, is one of the strengths that make Spain the preferred place when deciding to negotiate a PPA.

Finally, the upward trend in renewable energy consumption in Spain is the cause and the consequence of the increase in the number of PPA. It is a vicious circle and makes Spain a paradise of the PPA. No need to wait for the energy transition to move forward. The PPA are another sign that shows that this transition already began.

The offtakers of the PPA in Spain

As for the energy sellers in these PPA, it was already seen that they are mainly photovoltaic energy projects. In most cases, they look for a PPA as a way to get financing for the project.

On the side of the energy buyers, the offtakers, there are basically two types. On the one hand, there are the retailer companies, large consumers or electro‑intensive industries. These profiles seek PPA to cover their consumption or that of their clients with renewable energies and, above all, at a very competitive price. It is in these cases where the most aggressive prices are seen.

On the other hand, there are large European companies. In this case, what they seek is to offset their emissions in Europe with the certificates of renewable origin guarantees obtained in projects in the peninsula through virtual PPA (VPPA). These offtaker profiles do not look for such aggressive prices. Their main objectives are, in addition to obtaining green certificates to offset their emissions, to obtain stability through a fixed price of the energy cost in the long term, that is, they seek to mitigate the risk of market prices with a PPA.

The questions of the webinar attendees

All the topics covered in the webinar aroused the interest of the attending public, and among them, obviously, there were many questions related to the PPA. There was also interest in the services provided by AleaSoft, as a result of the analysis of the evolution of the energy markets carried out during the first presentation of the webinar. Some of the characteristics of the long‑term prices forecasting reports that differentiate them from those of other providers of these services were highlighted. These include the quality and coherence of the science‑based forecasts, the thirty‑year hourly prices forecasts, and the confidence bands that, beyond alternative scenarios, offer a probabilistic metric of the future prices.

The second part of this series of webinars

At AleaSoft, the second part of this webinar is being organised, which will be held on April 15 and which will feature, on that occasion, the participation of speakers from Axpo. In this webinar, how the energy markets in Europe evolve and their medium and long‑term prospects will continue to be analysed. The new players in the financial markets to absorb the demand for financing, taking into account all the renewable energy capacity that is expected to be installed in the coming years, as well as the taking of positions regarding the climate change of the large stakeholders worldwide will also be discussed. In addition, the corporate PPA will be analysed as a solution for both the industry and the development of renewable energy.

Previously at AleaSoft other webinars were held in which the financing of the renewable energy projects was addressed with the collaboration of important companies of the energy sector. These are the webinars of October 2020 with the participation of Deloitte, November 2020 with Vector Renewables, January 2021 with PwC Spain and February 2021 with Engie. In all these webinars, the importance of the long‑term prices forecasting with a 30‑year horizon and hourly granularity to negotiate the conditions of a PPA, participate in the renewable energy auctions, in the audits and the portfolio valuation was highlighted.

PrevAnteriorFinancing, regulation and international opportunities for the Spanish renewable energy companies
SiguienteMIBEL reached again the lowest prices in Europe while they rose in the rest of electricity marketsNext
Menu
Facebook-f Twitter Linkedin Instagram