AleaSoft, July 6, 2020. Most of the electricity markets in central and northern Europe registered negative hourly prices during the first weekend of July due to the increase in wind energy production. In Germany, the average for day 5 was ‑€15.34/MWh, the lowest since the end of May. In the Nord Pool market, that same day the average was €0.72/MWh, the lowest daily value since at least 2011. This week the wind energy production is expected to drop in most markets, so the prices will recover.

The week from June 29 to July 5, the solar energy production decreased in the markets of Germany, France and Italy compared to the week of June 22. In the German market the reduction in production was 18% while in the French and the Italian it was 15% and 4.6% respectively. On the contrary, in the markets of the Iberian Peninsula the production increased, by 7.2% in the Portuguese and by 5.4% in the Spanish. 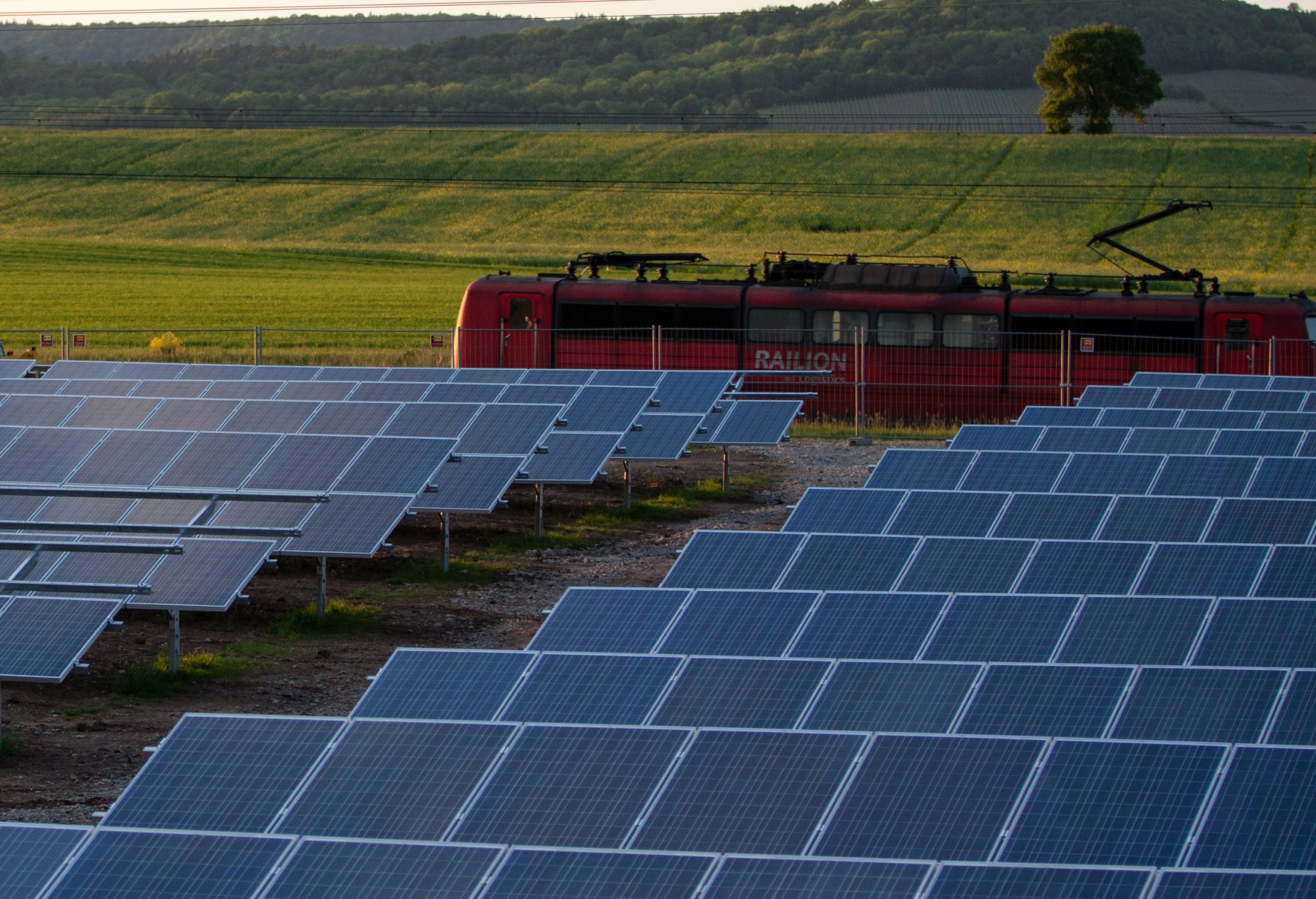 In the first five days of July, the solar energy production in Germany and France also decreased compared to the same days of July 2019. In the case of the German market it decreased by 11% and in the French market by 5.1%. On the contrary, in the Spanish market, the solar energy production, which includes the photovoltaic and solar thermal technologies, increased by 75% during that period. In the case of the Portuguese market it increased by 37% and in the Italian by 6.1%.

For the week of July 6, the AleaSoft‘s solar energy production forecasting indicates a decrease in the Spanish market. On the contrary, it is expected to increase in the Italian and German markets. 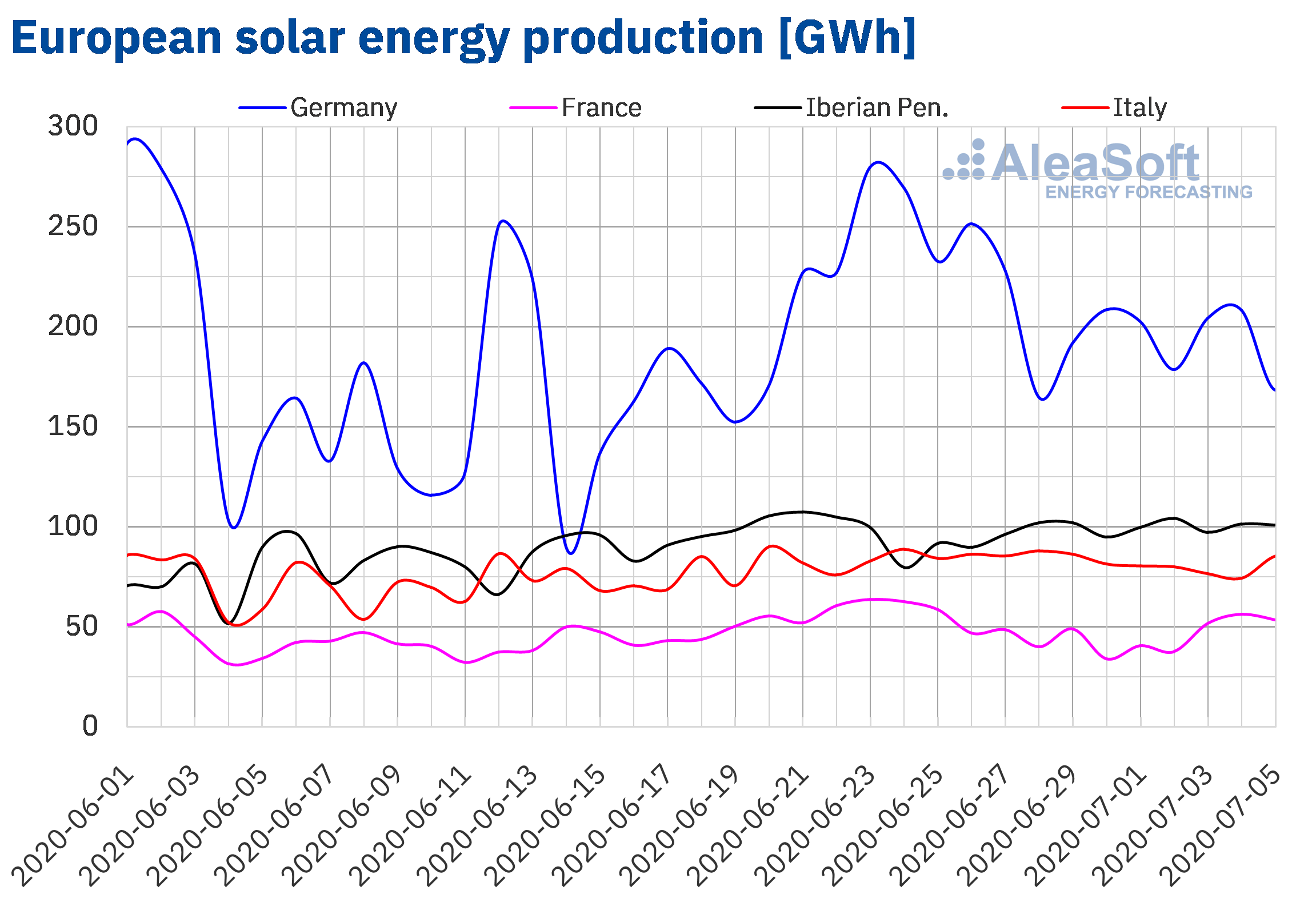 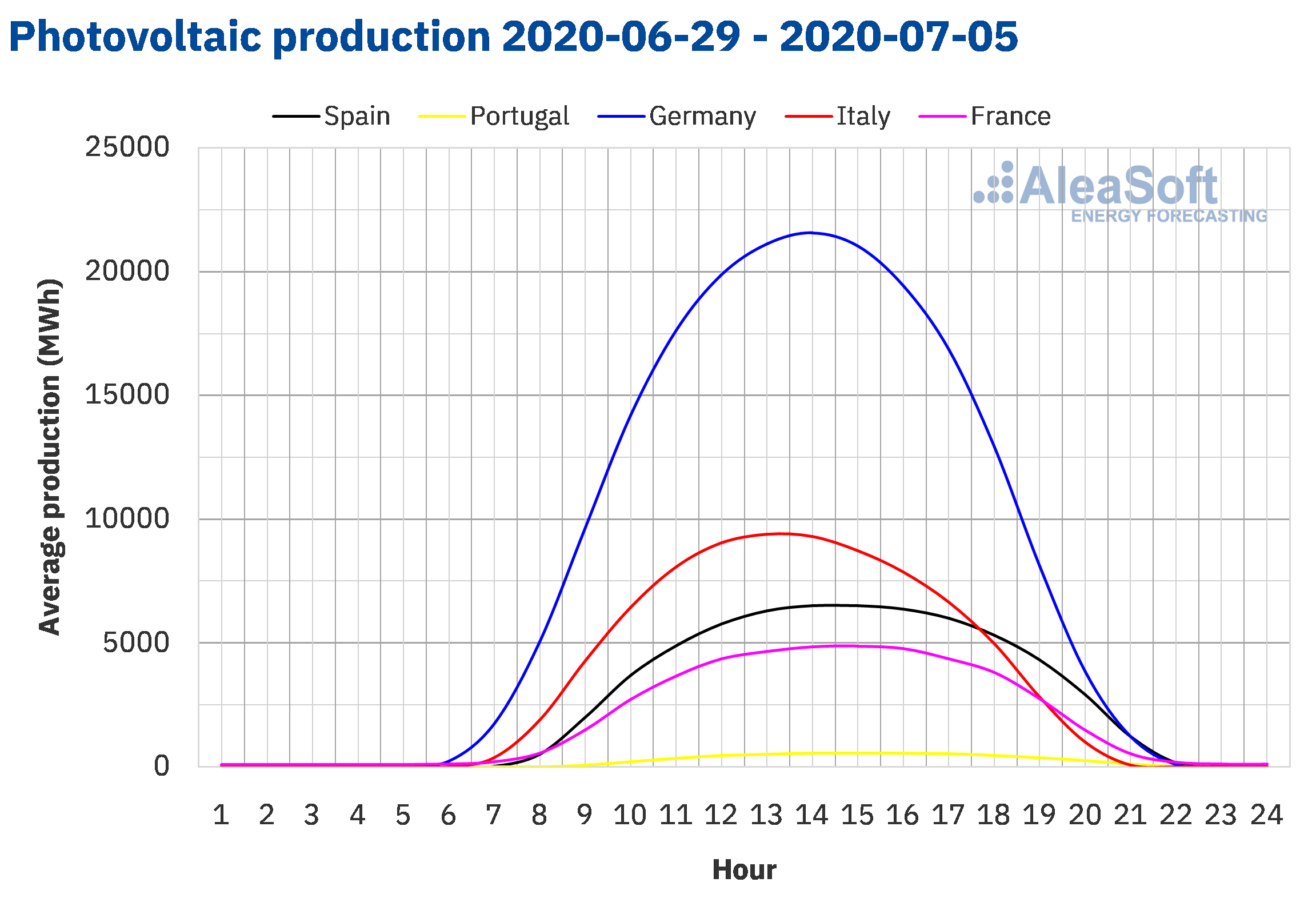 The week of the end of June and the beginning of July ended with a general increase in wind energy production compared to the fourth week of June. In the German market it increased more than double what was produced the previous week, while in the French the production grew about 47%. In the rest of the markets, the production with this technology increased between 13% and 14%.

In the year‑on‑year analysis, so far in July, the wind energy production was also higher in all the markets analysed at AleaSoft. The greatest difference between these periods was registered in the Italian market, where the production grew by 245%. In the markets of Portugal and France the increases were also high during these first five days. In the Portuguese market, the production increased by 89%, while in the French market the increase was 85%. On the other hand, in Germany and Spain the growths were 14% and 10% respectively.

For this week the AleaSoft‘s wind energy production forecasting indicates an increase in the Iberian markets. On the contrary, in the markets of Germany, France and Italy a reduction in production is expected compared to the week of June 29. 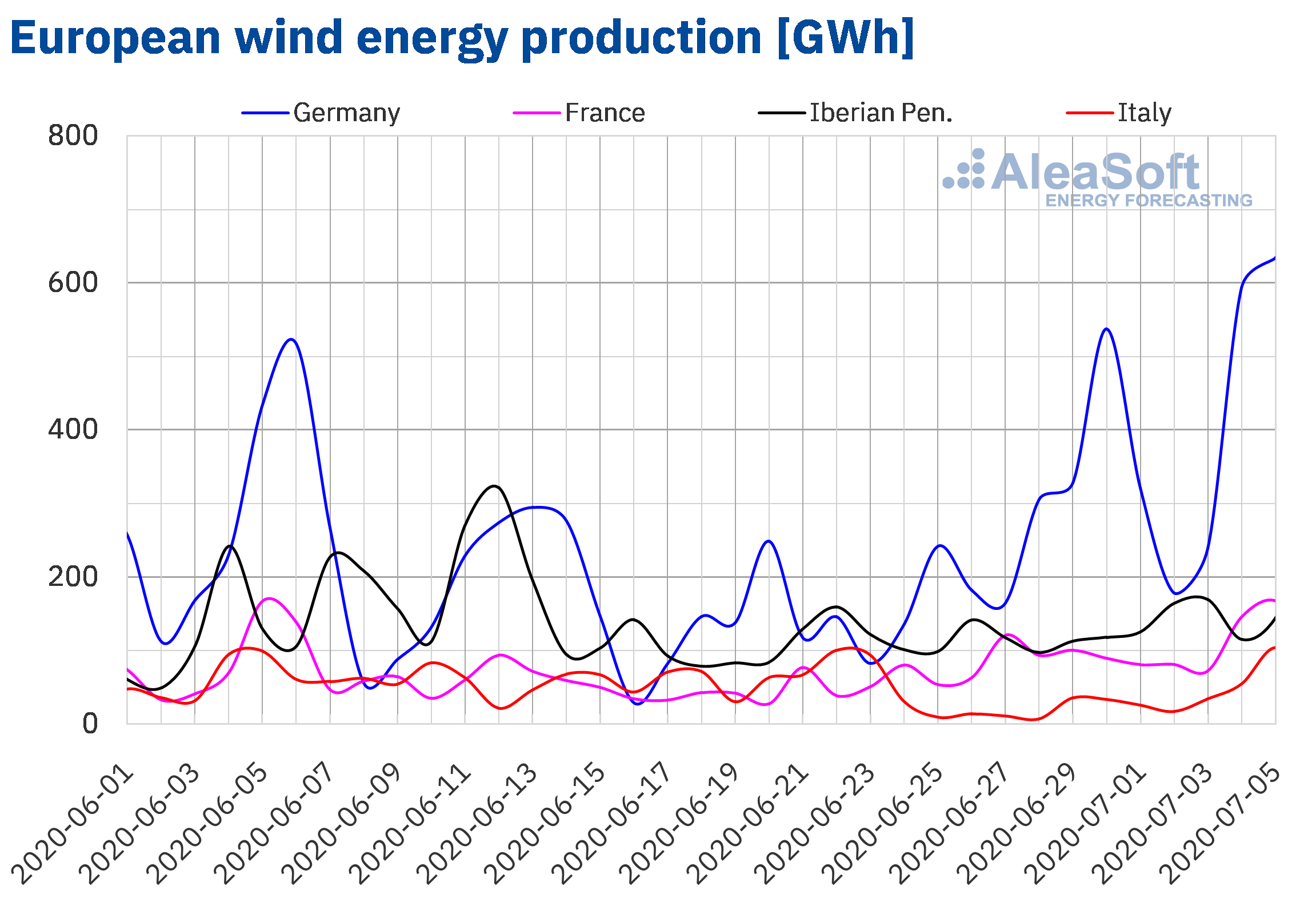 The electricity demand increased in most markets during the week of June 29 compared to the fourth week of June. In Spain and Italy, it continued to recover for the third and fourth consecutive week respectively, registering increases of 6.3% and 7.0% in that order. One of the influencing factors in the rise in Spain was the effect of the holiday of June 24 in some regions, which when corrected results in an increase of 5.4%. Other increases in demand were 3.4% in Great Britain, 1.6% in Portugal and 1.4% in Germany. In Belgium, the Netherlands and France there were decreases of 2.7%, 2.2% and 0.3% respectively.

For the week of July 6, the AleaSoft’s demand forecasting indicates that in most markets the demand will end with values similar to those of the previous week and it is expected to decrease in the case of Great Britain. In some European countries, some regions began to be quarantined due to the appearance of new outbreaks of COVID‑19, which could affect the electricity demand. 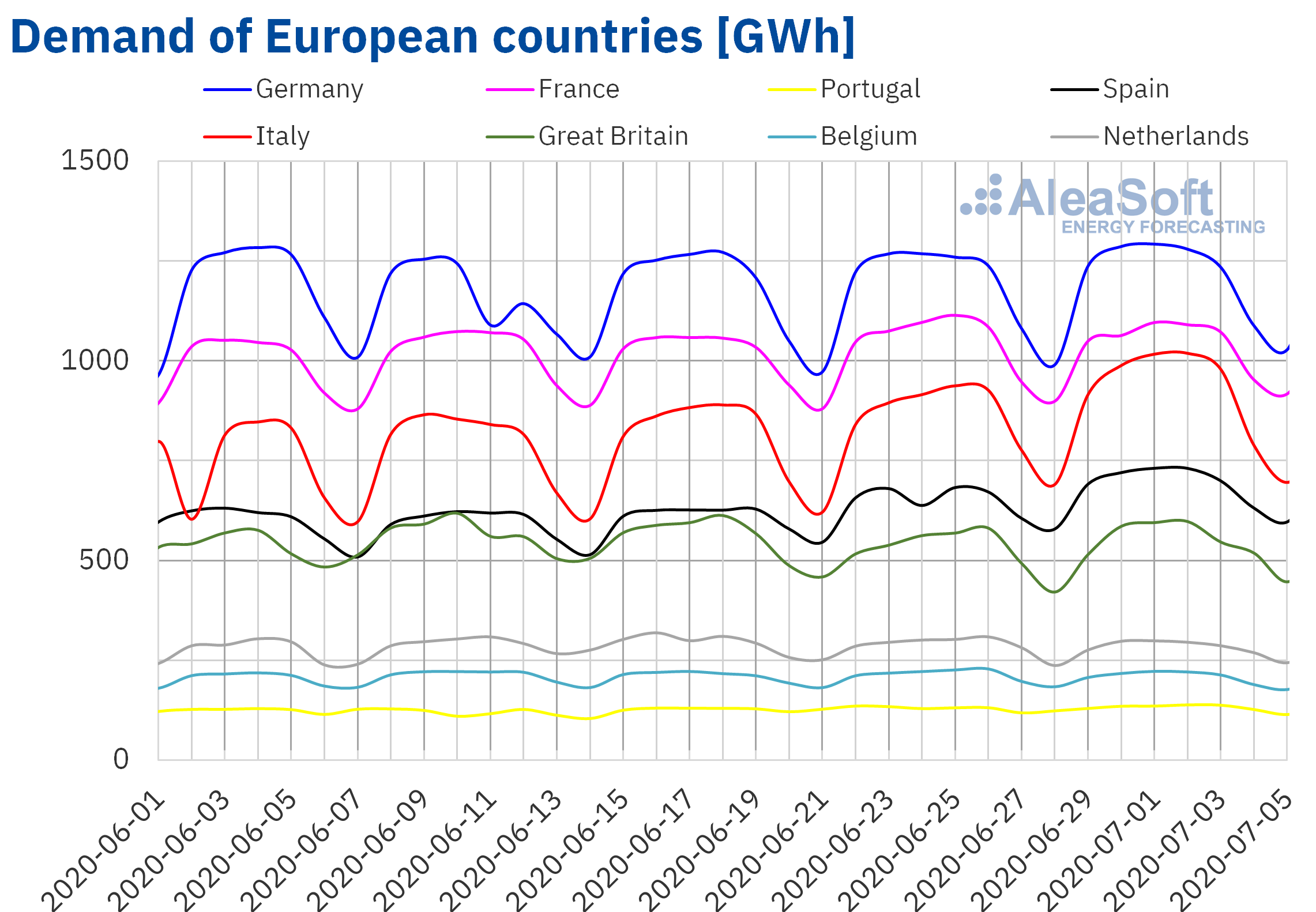 The week of June 29, the prices fell in most of the analysed European electricity markets compared to those of the week of June 22. The exception was the IPEX market of Italy, where there was an 11% increase. On the other hand, the market with the greatest drop in prices, of 44%, was the Nord Pool market of the Nordic countries, followed by the EPEX SPOT market of Germany, with a decrease of 28%. While the market where the price fell less, by 1.3%, was the MIBEL market of Spain, followed by the market of Portugal, with a decrease of 1.4%. In the rest of the markets, the price drops were between 6.7% of the EPEX SPOT market of France and 16% of the EPEX SPOT market of Belgium. These decreases in prices were related to the general increase in wind energy production in Europe, mainly towards the end of the week when there were negative prices in some markets for this reason.

As for the daily prices, the lowest of last week were reached on Sunday, July 5. That day, the high levels of wind energy production, combined with the drop in demand of the weekend, allowed the prices to plummet in most European markets. A negative daily price of ‑€15.34/MWh was reached in the German market, the lowest since the end of May. In the Nord Pool market, the daily price was €0.72/MWh, the lowest in this market since at least 2011. In this market, in addition to the wind energy production, the hydroelectric energy production was also high due to the thaw. Other markets with low daily prices were the N2EX market and the EPEX SPOT market of France, the Netherlands and Belgium, with prices of €2.95/MWh, €3.19/MWh, €2.39/MWh and €2.14/MWh respectively. In contrast, in the IPEX and MIBEL markets, despite the decline, the prices were above €20/MWh, specifically €25.86/MWh in the MIBEL market and €23.39/MWh in the IPEX market. 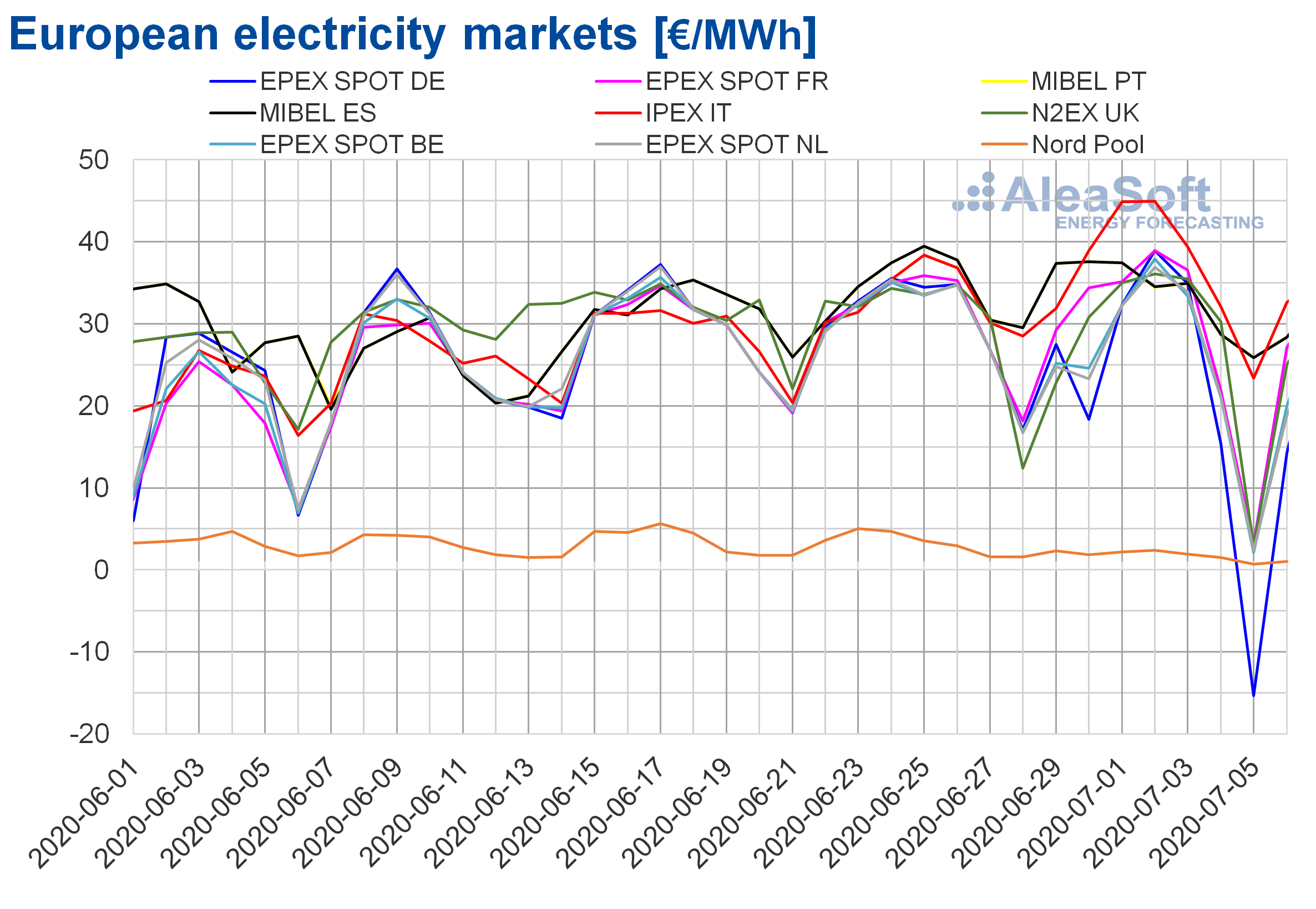 During the week of June 29, the electricity futures prices for the fourth quarter of 2020 had a heterogeneous behaviour in the markets analysed at AleaSoft, although the increases prevailed. The ICE and NASDAQ markets of the Nordic countries reduced their price by around 12% in the session of July 3 compared to that of Friday, June 26. In the ICE market of Belgium, the prices also decreased by 2.7%, being the one with the lowest decrease. The most remarkable was the drop in the EEX market of France during the session of July 3. The difference between the settlements of the last two weeks represented a decrease of more than €6/MWh, which meant a variation of ‑10% of its price.

In the case of the product for the calendar year 2021, the prices had a similar behaviour, although with more moderate variations. In the vast majority of the markets there was an increase in prices, of which the EEX market of France and the NASDAQ and ICE markets of the Nordic countries were the exceptions, with drops of 1.6%, 6.2% and 6.5% respectively. For this annual product, the ICE market of Belgium did not register a reduction in its price, but it was the one with the smallest increase in the analysed markets, of 0.2%.

Of that week, it should be noted that the OMIP Iberian futures market registered the first purchase and sale of electricity to 10 years, a few days after these long‑term products began to be available. The traded volume was only 3 MWh base between 2021 and 2030, but that accumulated amounts to about 263 GWh in ten years.

The Brent oil futures for the month of September 2020 in the ICE market reached their highest settlement price of last week on Thursday, July 2, of $43.14/bbl. This price was 4.9% higher than that of Thursday, June 25, and the highest since the beginning of March. On Friday, the price fell to $42.80/bbl, but it was still 4.6% higher than that of Friday of the previous week.

Regarding the TTF gas prices in the spot market, they started last week with an upward trend until reaching an index price of €5.85/MWh on Wednesday, July 1, the highest since the end of April. But, then the prices dropped to €5.05/MWh of the weekend. This Monday, July 6, the index price recovered to €5.21/MWh.

On the other hand, the API 2 coal futures prices in the ICE market for the month of August 2020, the week of June 29, remained above $50/t. The minimum settlement price of the week, corresponding to Wednesday, July 1, was $50.90/t and was 3.1% higher than that of the previous Wednesday. While the maximum settlement price was $52.00/t and it was reached on Thursday, July 2. This price was 4.6% higher than that of the same day of the week of June 22 and the highest since the end of March.

Regarding the CO2 emission rights futures prices in the EEX market for the reference contract of December 2020, the week of June 29, they increased every day compared to the previous day, with the exception of Thursday, July 2, when it decreased by 1.2%. As a consequence, on Friday, July 3, a settlement price of €27.90/t was reached. This price was 13% higher than that of the previous Friday and the highest since the first half of August 2019. 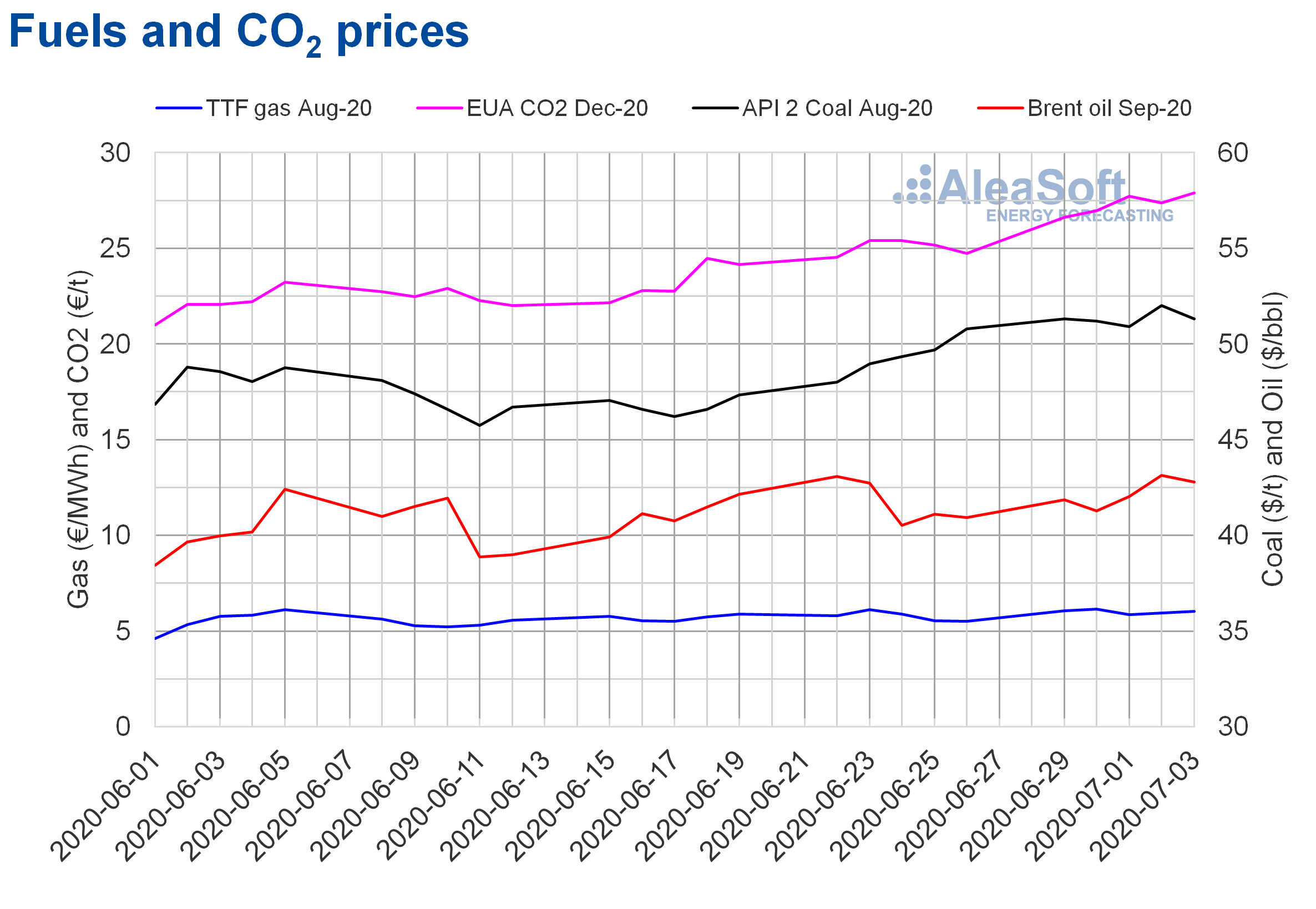 The demand and the prices of the European electricity markets sank in the first half of the year, reaching historical lows due to the coronavirus crisis. As the different countries eased the restrictions to contain the pandemic, the electricity demand and the prices of Brent, gas and CO2 began to recover, which caused the electricity markets prices to begin the path of the recuperation. The approval of the Royal Decree‑Law 23/2020 is also good news for the renewable energy sector in Spain, as it includes measures for the reactivation of the economy that provide a boost for its development. This good news is not limited only to Spain, as in Portugal the next auction of solar capacity will be held in August, which should have been held in March but had to be postponed due to the coronavirus crisis. In this context, it is very useful to have long‑term price forecasting that take into account the recovery scenarios.

The evolution of the energy markets and the financing of the renewable energy projects were analysed in the webinars organised at AleaSoft since the pandemic reached Europe. After the summer, this analysis will be updated in a new webinar “Energy markets in the recovery of the economic crisis”, on September 17. The focus will also be placed on the future prospects given the pessimistic forecasting of economic growth and the possibility that, with the arrival of autumn and winter and the start of the school year in person, new outbreaks may occur that make it necessary to harden again the containment measures, with the implications that this has for the demand and the prices of the energy markets.

At the AleaSoft’s energy markets observatories their evolution can also be monitored with daily updated data. The observatories include the main variables of the markets, which can be visualised using comparative charts of the last weeks.