In search of opportunities for the renewable energies in international markets

AleaSoft, March 31, 2021. The growth of the renewable energies in Spain to achieve the renewable energy capacity targets set in the NECP for 2030 is making the renewable energy industry and companies grow in the country. The EY experts that participated in the AleaSoft’s webinar analysed the opportunities of these companies in international markets with the aim of diversifying the investment and obtaining higher returns.

The opportunities of the Spanish renewable energy companies in other markets was one of the topics discussed on March 18 in the first part of the webinar “Prospects for the energy markets in Europe. Spring 2021” organised by AleaSoft with the participation of speakers from EY. In addition to reviewing the evolution of the energy markets in Europe in recent months, other topics were also analysed and debated such as the conditions of financing of renewable energy projects under different remuneration schemes and how Spain became the paradise of the PPA in Europe.

The opportunities of the renewable energies in international markets

It is becoming increasingly clear that developers, large electricity and energy companies are investing significantly in renewable energy. These companies are looking for ways to expand their investments in other markets in order to diversify the investment and obtain higher returns. 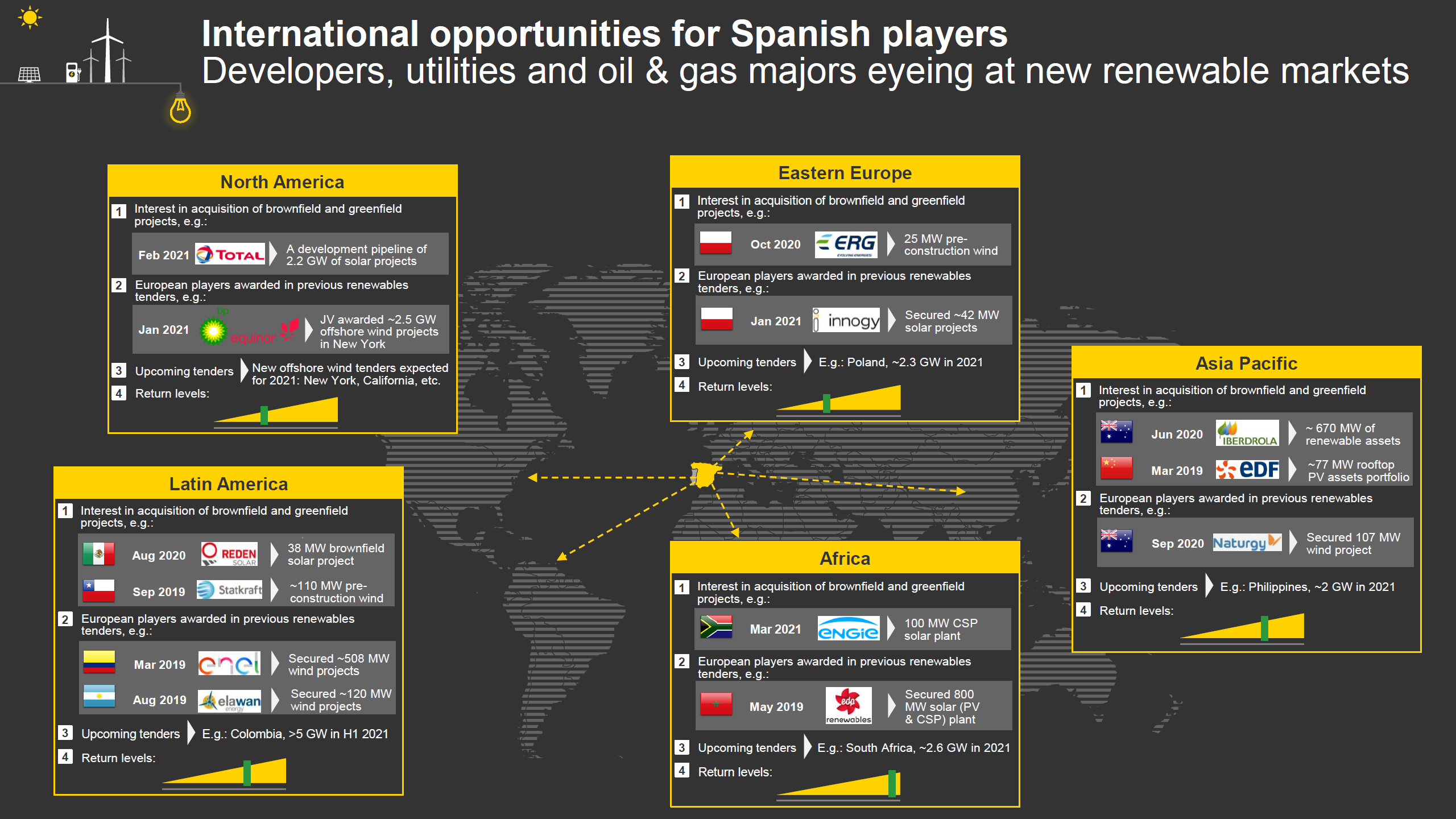 Traditionally, the general trend regarding investments in international markets was seeking operational projects in other markets. But increasingly, the investment objective is turning towards ready‑to‑build projects or projects to be developed, with the intention of obtaining higher returns.

The first phase observed in this internationalisation was towards neighbouring countries, such as Portugal, Italy or France, relatively well‑known markets and with a low risk. But the interest in countries of Eastern Europe such as Poland, the Baltic countries or the Balkans, where higher returns can be achieved, also increased.

There are also European companies investing in North America. According to the experts, the interest in the US markets is expected to grow. It is a market that offers more and more opportunities, and more after the announcements of the economic stimulus packages of the government of President Biden.

When looking for markets with higher returns, these can be found in the Latin American and Asia Pacific regions. They are markets less saturated with projects, with fewer competitors and with many opportunities. Obviously, higher returns also carry higher risks, economic, of inflation or even political.

Finally, on the African continent there are opportunities for those companies that can be exposed to even higher returns, but in exchange for greater risks as well.

To explore the investment possibilities in new markets, it is essential to have a vision of the future of these markets. The long‑term prices forecasts provide this necessary vision.

The AleaSoft‘s long‑term reports are available for all European markets and for markets of Latin America, the United States, Eastern Europe and Asia. The reports include hourly prices forecasts up to 30 years that allow estimating the captured price for a specific technology or a specific project. The confidence bands in the prices forecasts provide a probabilistic metric that allows a quantitative analysis of risks, a necessary input for the financial and risk management models.

Prospects for the energy markets in Europe

The second part of this webinar will be held on April 15 and it will have the participation of Axpo. In addition to analysing the evolution of the energy markets, other issues will be discussed and analysed, such as the new players in the financial markets to absorb the demand for financing given the expected avalanche of installed capacity, the taking of positions regarding the climate change of the large stakeholders worldwide and the corporate PPA as solutions for the industry and for the renewable energies.

PrevAnterior2021 starts with a first quarter of renewable energy records
SiguienteFilomena, the gas and the CO2 lead the electricity markets prices to pre-COVID 19 levels in the first quarterNext
Menu
Facebook-f Twitter Linkedin Instagram