The electrification of the transport sector: the great challenge for the decarbonisation and the development of the renewable energies

AleaSoft, March 13, 2021. The transport sector is responsible for almost a quarter of the greenhouse gas emissions in Europe. The Government faces a great challenge if it wants to achieve the emission reduction targets set by the European Union for the year 2030. The electrification of the transport will not only help to decarbonise this sector, it will also favour the development of the renewable energies and with them the decarbonisation of the electricity sector.

The European Union set as a goal for 2030 the reduction of the greenhouse gas emissions by, at least, 55% in relation to the level of 1990. This is an intermediate goal to achieve the climate neutrality in 2050.

The emissions of the transport sector in Europe account for almost a quarter of the greenhouse gas emissions. In Spain, according to the National Inventory of Greenhouse Gases of the Ministry for the Ecological Transition and the Demographic Challenge, in 2018 the transport sector was the one that generated the highest amount of greenhouse gas emissions, 27%, followed by the industrial activities, with 19.9%, the electricity generation, with 17.8%, and the agriculture, with 11.9%. Therefore, reducing the emissions in this sector is crucial to achieve the objectives set by the European Union.

The road transport is responsible for more than 90% of the emissions of the transport sector in Spain, so it is clear that this is where the efforts must be intensified. 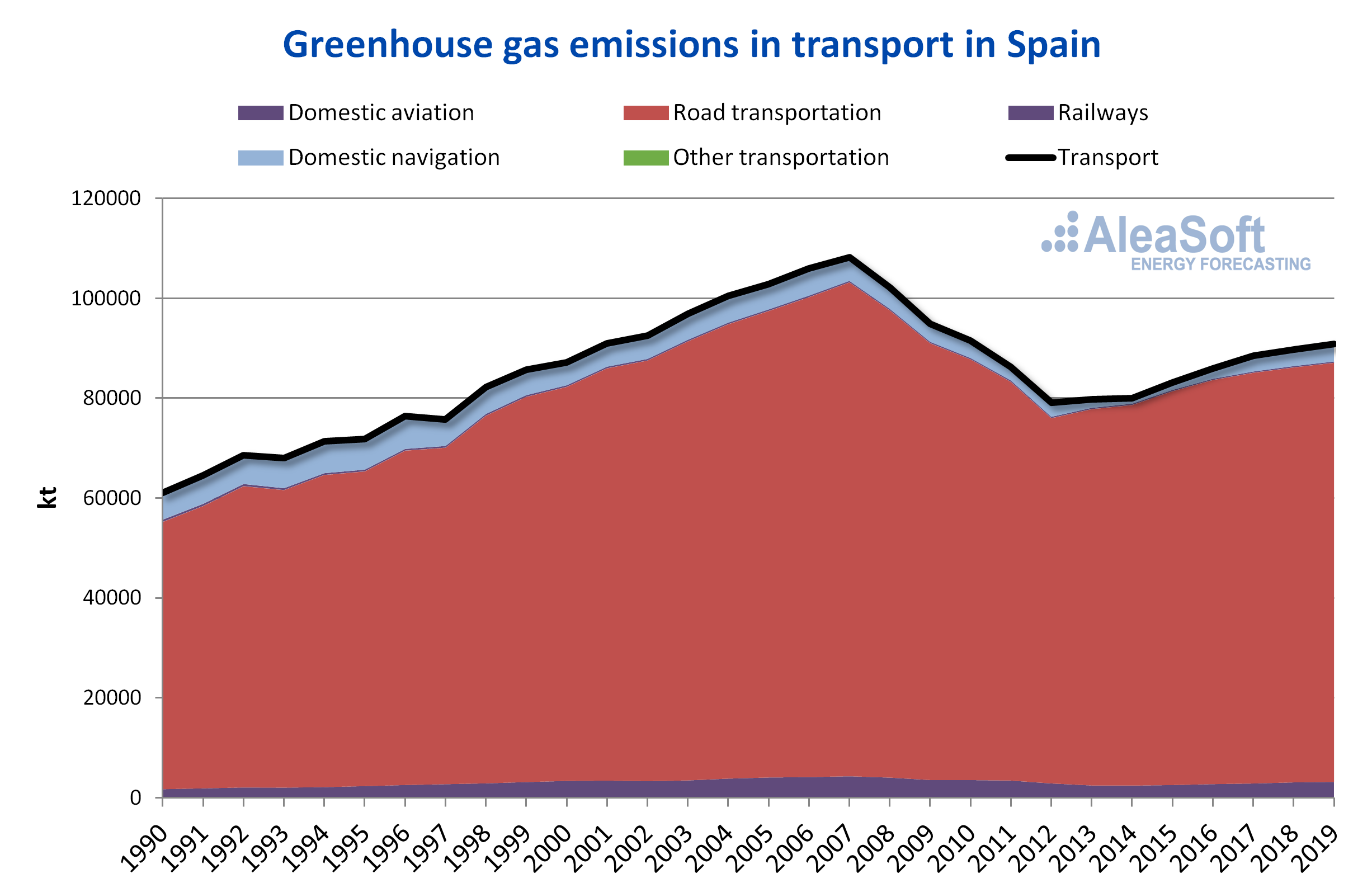 Source: Prepared by AleaSoft using data from the National Inventory of Greenhouse Gases of the Ministry for the Ecological Transition and the Demographic Challenge.

The electrification of the transport sector will be crucial to achieve the objectives of reduction of greenhouse gases, and in turn will make it possible to absorb a large part of the electricity from renewable origin that is expected to be installed in the coming years, favouring their harmonious development. Goals that will also be boosted by using hydrogen fuel cell vehicles for the long‑distance transport. In other words, electrifying the transport sector favours the decarbonisation of this sector, but also that of the electricity sector.

The Government faces a great challenge, to be able to encourage the use of the electric vehicles and the development of the infrastructures that this mobility revolution needs.

The NECP and the development of the electric transport

The Integrated National Energy and Climate Plan (NECP) pays special attention to the penetration of the renewable energies. The focus on the clean generation is something very positive and the photovoltaic and wind energy development plans are ambitious and feasible to achieve. The greenhouse gas emissions in the electricity generation decreased and will continue to do so in the coming years. The Spanish generation mix at the moment is robust and for the last two years it has practically no coal‑fired generation. However, the NECP should be just as clear on the part of the green consumption, especially in the transport and the industry.

The NECP, in addition to recommendations and general measures, must draw up a strategic plan for the development of an electric transport industry that encourages the million‑euro investments that this industry requires in the coming years.

On next March 18, at AleaSoft the webinar “Prospects for the energy markets in Europe. Spring 2021” will be held, which will feature the participation of speakers from EY (Ernst & Young). In the webinar the evolution of the European energy markets, the main novelties in the regulation of the energy sector, the financing of the renewable energy projects, the importance of the PPA, as well as the business opportunities abroad will be analysed. The speakers will be Oriol Saltó i Bauzà, Manager of Data Analysis and Modelling at AleaSoft, Antonio Hernández García, Partner of Regulated Sectors at EY and Javier García Seijas, Partner of Infrastructure, Modelling & Project Finance at EY. In the second part of Spanish version of the webinar, an analysis table will be held in which, in addition to Oriol Saltó i Bauzà, Antonio Delgado Rigal, CEO of AleaSoft, Julien Saigault, Global Renewables Program Leader at EY, Antonio Martinez Mozo, Partner of Corporate Finance at EY and Inés Bargueño Sánchez, Director of Transformation Architecture at EY will participate.

Previously at AleaSoft other webinars were held in which speakers from other important companies of the sector participated, such as Engie, PwC Spain, Vector Renewables and Deloitte. In these webinars it was always emphasised that to develop renewable energy and obtain financing or pass an audit it is necessary to have long‑term quality, scientifically based forecasts, with up to 30 years of horizon and hourly breakdown, such as those carried out at AleaSoft. For the risk management scientifically, the outputs based on a probabilistic metric are essential, which can be those corresponding to the P15 and P85 or P10 and P90 percentiles.