The green ammonia or how to transport the green hydrogen

AleaSoft, March 10, 2021. The green hydrogen revolution, a key part of the energy transition, will not only involve hydrogen, but a set of compounds and technologies capable of being energy vectors of the green hydrogen and that make its use possible in all those processes to be decarbonised in the industry, the transport and the economy in general.

It is increasingly clear that the green hydrogen will be one of the essential pillars that will sustain the total decarbonisation of the economy and, therefore, the global ecological and energy transition. When thinking about the green hydrogen, it is easy to divert attention to its uses as a fuel, whether for transportation or for heat production in industry. But that may not be exactly the way in which the hydrogen will eventually end up being used directly.

The field of the technologies that use hydrogen to replace the fossil and pollutants fuels is still in an early stage of development, although there are already numerous projects that use it. For example, some of the drawbacks that will have to be overcome are the difficulties in storing and transporting hydrogen, which requires high pressures and very low temperatures, is very volatile and is easily filtered through the smallest cracks.

The green hydrogen revolution does not mean that hydrogen itself is always used directly. Rather, it is understood that the hydrogen, and its production from renewable energies, will be the main component of the new energy vectors of a decarbonised economy.

An energy vector that can be part of the hydrogen revolution is the ammonia (NH3). The ammonia produced from green hydrogen can be considered green ammonia and its combustion does not generate CO2. Although the combustion of ammonia has some other disadvantages such as the possible generation of nitrogen oxides, there are techniques to reduce it, and the advantages over the pure hydrogen are multiple. On the one hand, its transport and storage require less extreme conditions, and on the other, it can be used to generate electricity with fuel cells similar to those of the hydrogen or burned in a turbine like the gas. 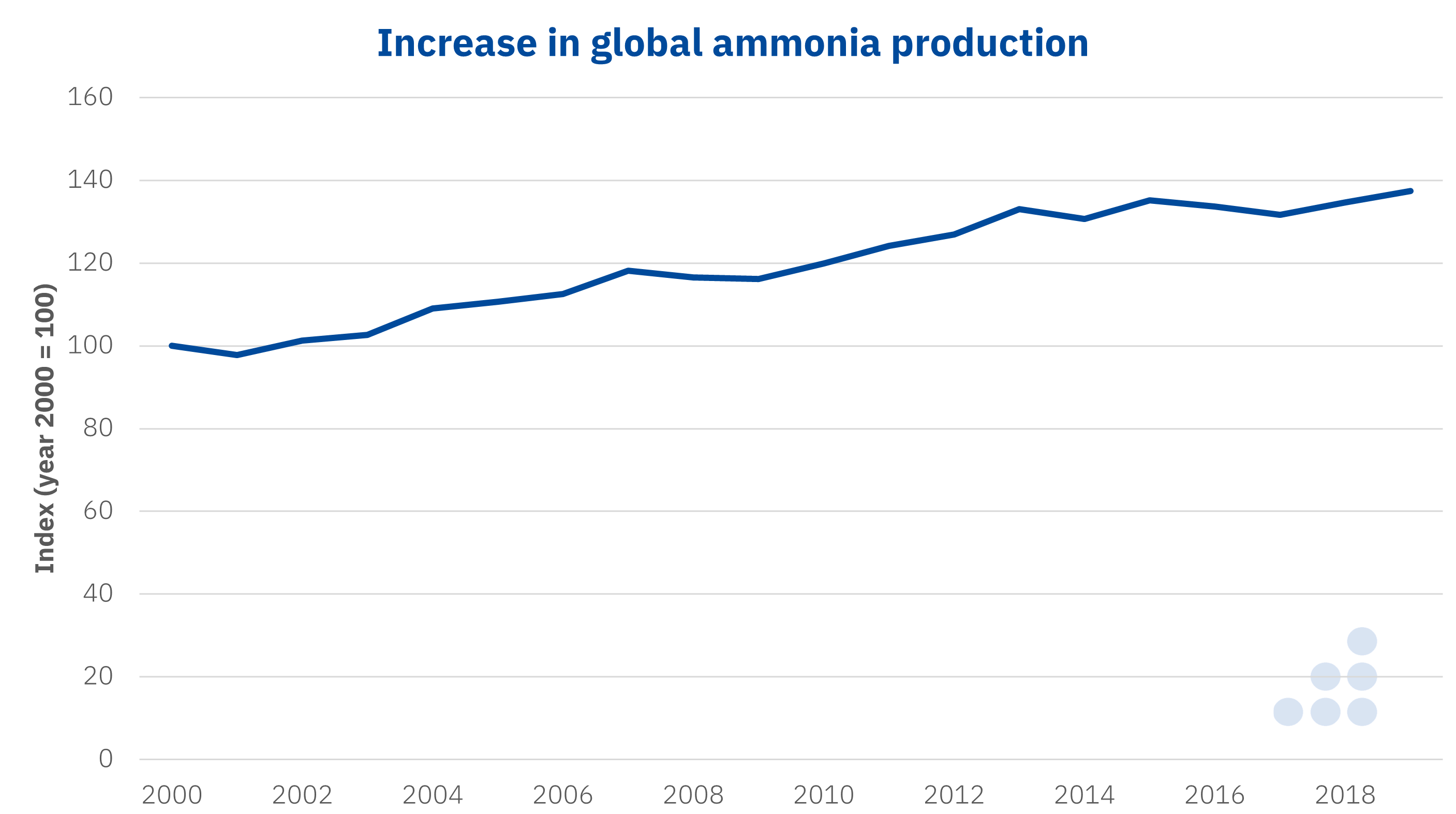 Estimated data for 2019.
Source: Prepared by AleaSoft using data from the IEA.

Beyond the use of the green ammonia as an energy vector, it is necessary to have a broader vision and to think that, for the complete decarbonisation of the industry, it will be necessary to turn in “green” many of the compounds and chemical elements that are raw materials for the industry and that right now are generated from fossil fuels, such as oil or gas, or that generate greenhouse gases during their production. Compounds such as the ammonia itself are widely used in the chemical and fertiliser industry.

In the last webinars organised by AleaSoft, the need to have long‑term prices forecasting with good quality, scientifically based and with hourly granularity of the prices in the thirty‑year horizon of the forecasting was highlighted, on topics as varied as the PPA, the financing and the bankability of the renewable energy projects, the account audits and the due diligence, and the renewable energy auctions. The AleaSoft’s webinars usually have the participation of speakers from the most important companies in the energy sector in Europe and globally. Companies such as Deloitte, Vector Renewables, PwC Spain and Engie participated in the last webinars.

The next webinar will be held on March 18 and it will focus on the “Prospects for the energy markets in Europe. Spring 2021”. This time there will be speakers from EY (Ernst & Young). During the webinar and the subsequent analysis table, the prospects for the markets in the spring of 2021, the financing of renewable energy projects, the importance of the PPA, the main novelties in the regulation of the energy sector and the opportunities of business abroad will be analysed.

At AleaSoft, long‑term reports are available for all European energy markets. Mid‑term European electricity markets prices forecasting reports are also available, which provide a vision of the prospects for the coming months and years, taking into account the most up‑to‑date scenarios for the evolution of the economy.

PrevAnteriorThe various options for the purchase of energy in the long term: from the self consumption to the PPA
SiguienteThe electrification of the transport sector: the great challenge for the decarbonisation and the development of the renewable energiesNext
Menu
Facebook-f Twitter Linkedin Instagram