AleaSoft, January 21, 2021. During the first four days of the third week of 2021, the prices of all electricity markets fell compared to those of the previous week. The less cold temperatures caused a decrease in demand which, together with higher renewable energy production, favoured the decrease in prices. On the 21st, most markets registered the lowest daily and hourly price of the year so far. The gas and CO2 futures also fell compared to the previous week.

In the first four days of the third week of January, the average price of all European electricity markets fell compared to the average of the same days of the previous week. The average price in the UK N2EX market between January 18 and 21, of €66.62/MWh, was the highest of all markets, but still, it was the one that registered the greatest decrease, of 56%, due to the high prices of this market during the second week of the month.

In most markets, the lowest daily price so far this year was reached on January 21 and in the early morning of that day, the hour with the lowest price so far was also registered, the lowest being the hour 5 of the EPEX SPOT market of Germany, with a value of €0.02/MWh. 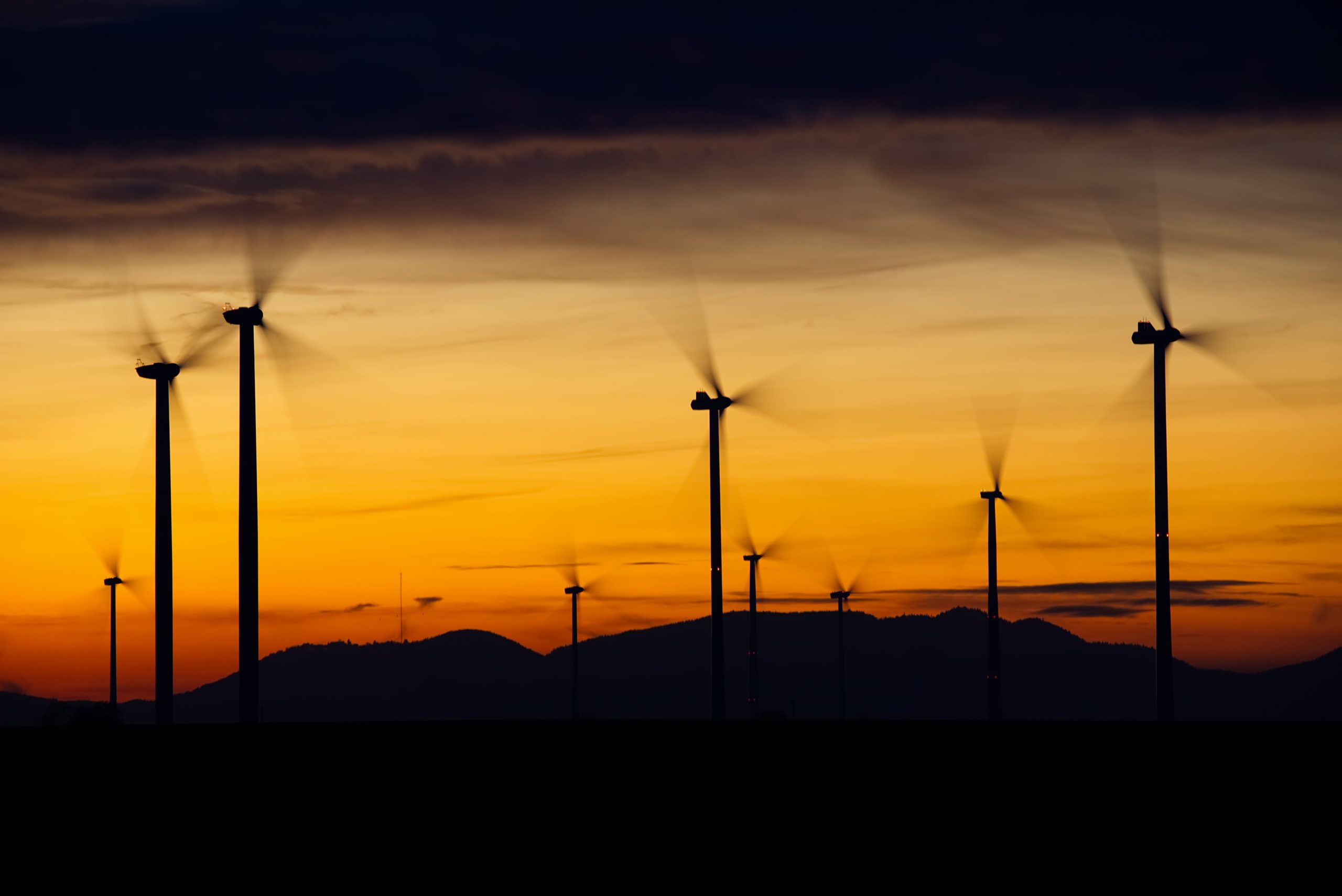 This decrease occurred due to the less cold temperatures reducing the demand and a greater renewable energy production. In addition, the gas and CO2 prices were lower than those of the second week of January. 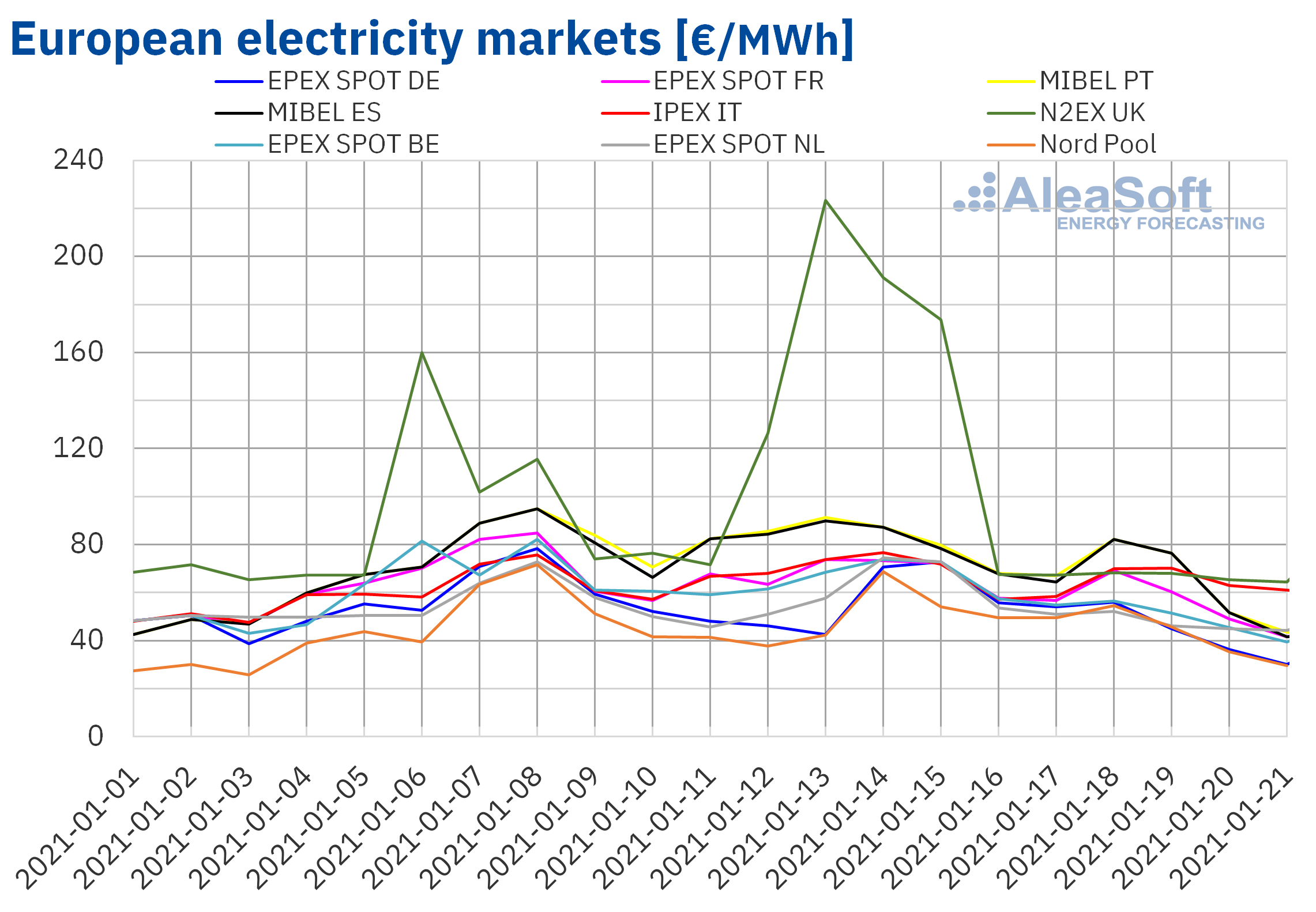 However, in the main European electricity futures markets, the prices for the second quarter of 2021 and for the year 2022 of the session of January 20 increased compared to those of the session of Friday 15 of the same month. The exceptions were the futures of Spain and Portugal for the next quarter traded in the EEX and OMIP markets, which fell between 0.9% and 1.0%, and those of the Nordic countries of the next year, both in the ICE market and in NASDAQ, which decreased by 0.8% and 0.4% respectively.

The electricity demand registered between January 18 and 20 fell in most European markets when compared to that of the first three days of the previous week, favoured by the increase in average temperatures, which was higher than 3 °C in the case of Spain. The greatest decrease in demand occurred in the markets of France and Portugal, in both cases of 5.7%. However, in the Italian market, where the average temperatures were 0.6 °C colder, the demand increased by 2.5% in this period. 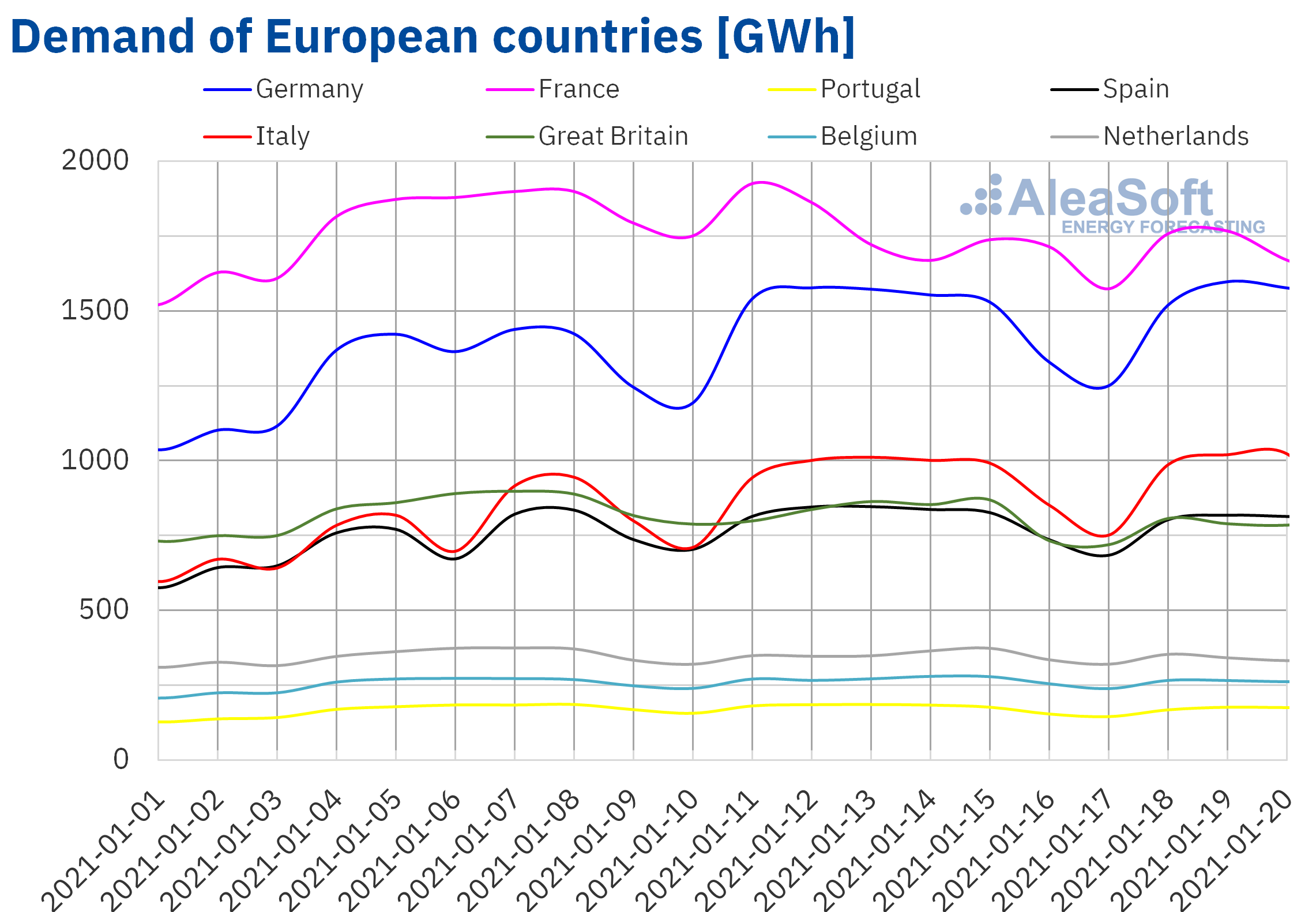 The solar energy production of the first three days of the week that began on January 18 increased in the markets of Germany, Italy and France when compared to the average production registered during the second week of January. The French market was the one with the highest increase, of 32%. However, in the Iberian Peninsula, the production fell by 28%. 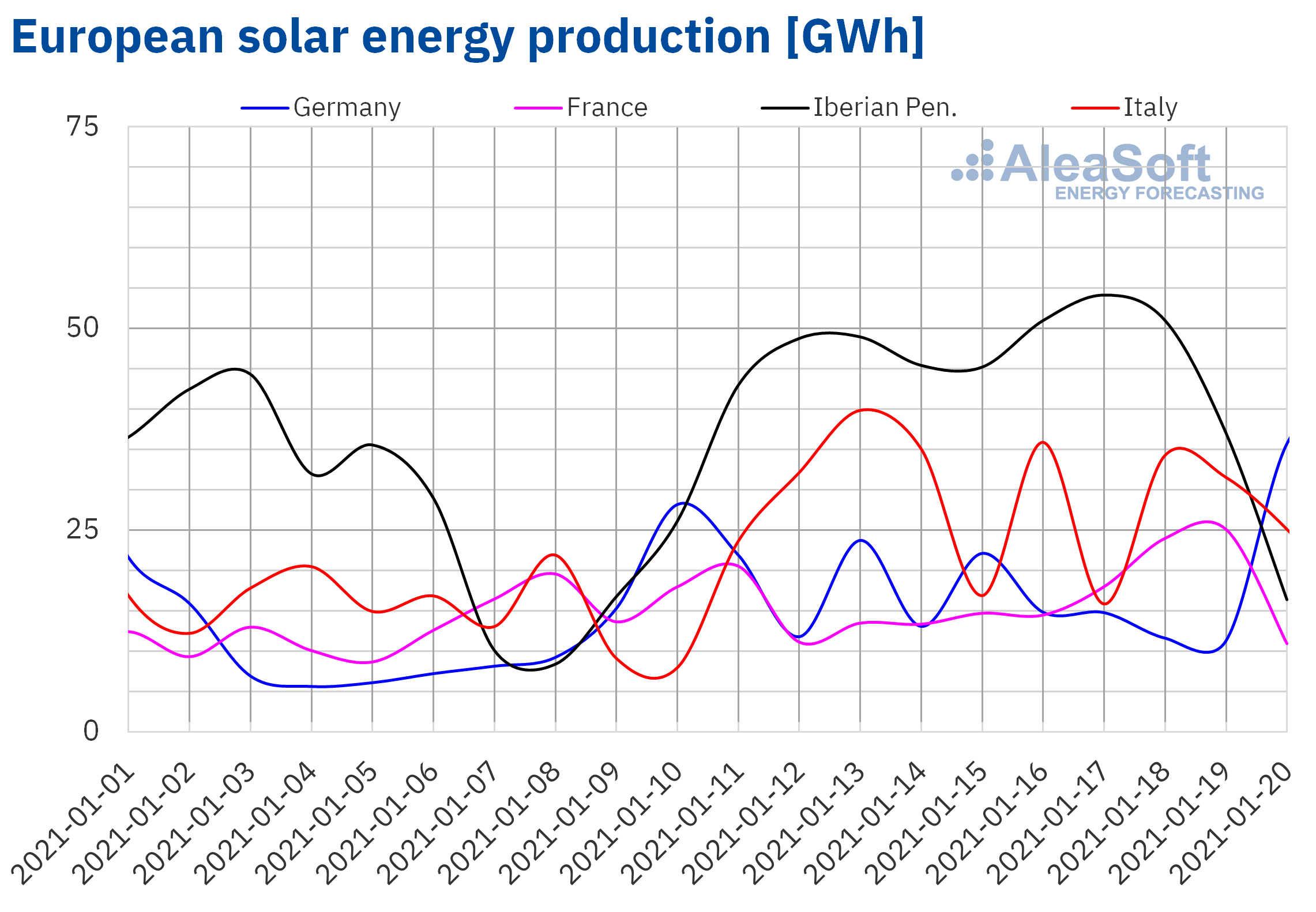 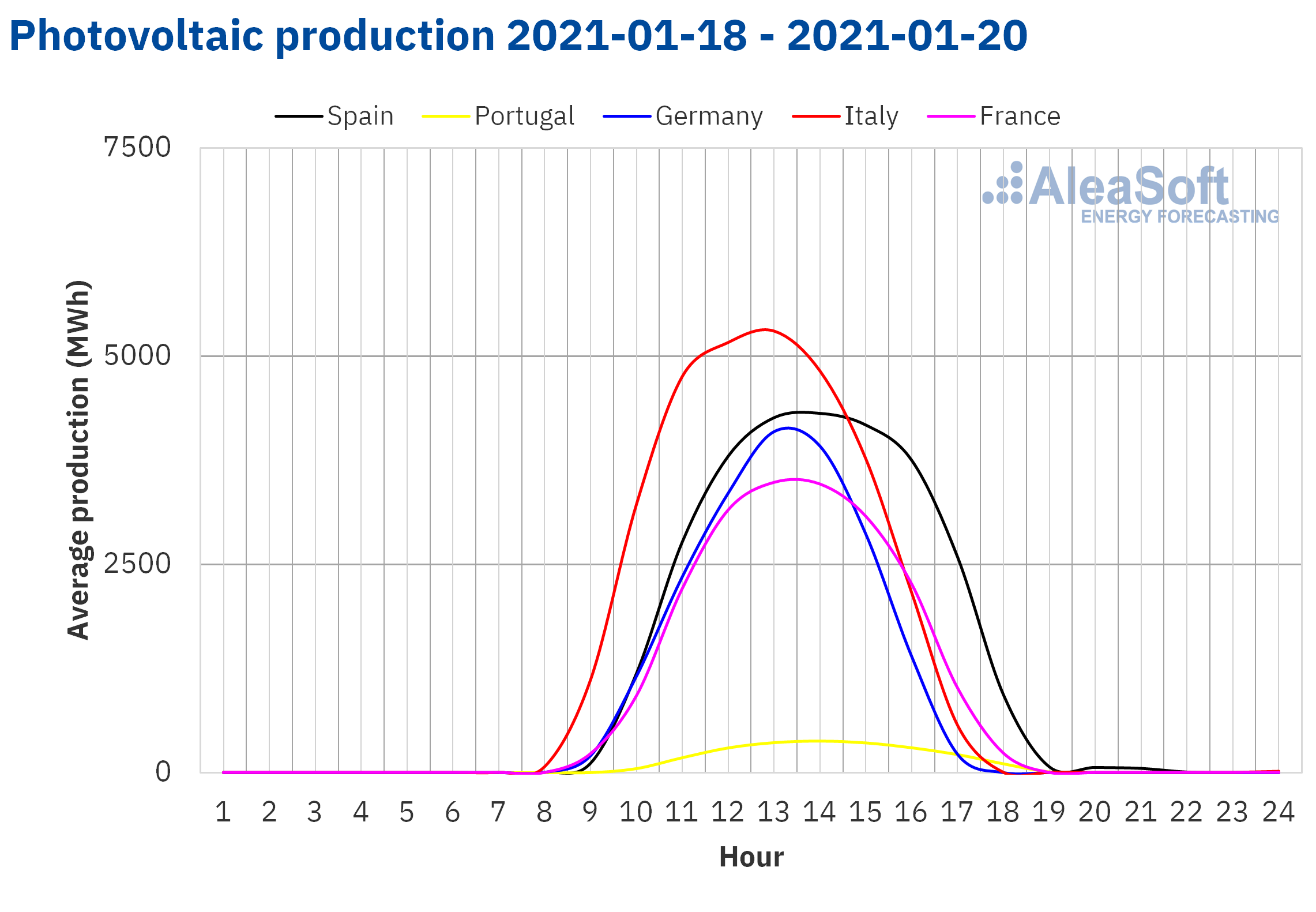 In the case of the wind energy production, when comparing that registered between January 18 and 20 with that of the previous week, an increase is observed in almost all markets. Portugal, with 168%, is at the head of these increases. In this comparison, the markets of Spain and Italy showed decreases of 5.9% and 8.4% respectively, but in Spain the production of the 20th and that forecasted for the 21st were higher than those of the previous week, which led to a decrease in prices in the MIBEL market. 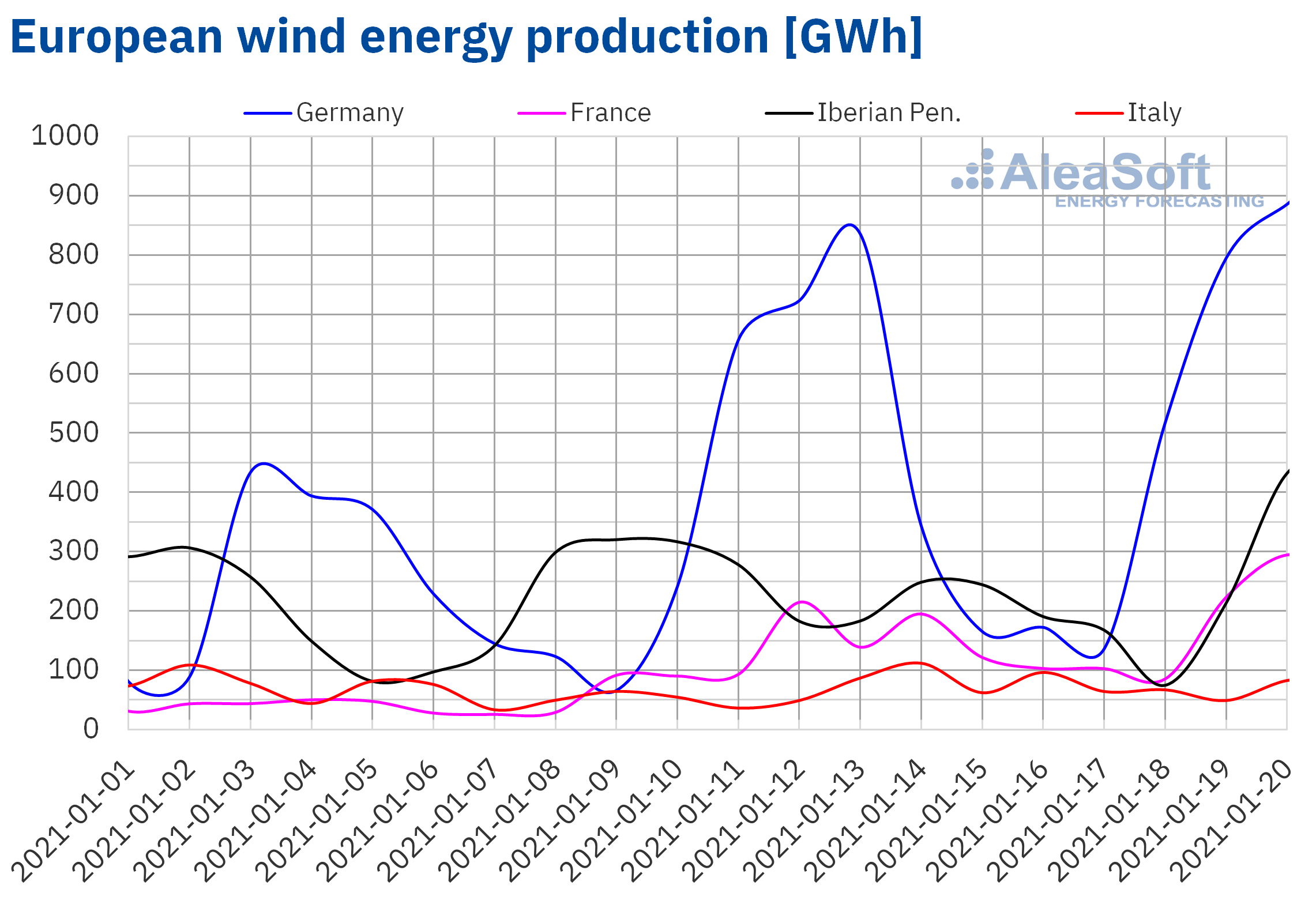 During the first three days of the week of January 18, the settlement prices of the TTF gas futures for February 2020 in the ICE market were around €20/MWh, generally lower than those of the previous week.

Currently, the gas reserves on the continent are at lower levels than usual. Therefore, there are concerns about the possibility that a new cold snap in February coincides with low levels of the gas reserves in Europe, favouring the rapid increase in prices. However, the supply problems are improving in Asia and the temperatures are less cold, so less gas is expected to be diverted there, improving the availability in Europe.

The settlement prices of the CO2 emission rights futures for the reference product of December 2021 in the EEX market continued above €30/t in the first days of the third week of January and even reached €33.09/t on January 19, but in general these values are lower than those of the week of January 11.

The settlement prices of the Brent oil futures for March 2021 in the ICE market were around $55/bbl in the first three days of the third week of January, reaching $56.08/bbl on Wednesday, January 20.

In recent days, the expectations that the new president of the United States will carry out fiscal stimuli that favour the economy and greater efforts to control the contagions of COVID‑19 in the country favoured the increase in prices. However, the data from the American Petroleum Institute published on January 20 indicates an increase in crude oil reserves of the United States, which may have a downward influence on the prices. In addition, there is concern about the increase in COVID‑19 infections in Asia, especially in China, where the mobility restrictions are increasing. 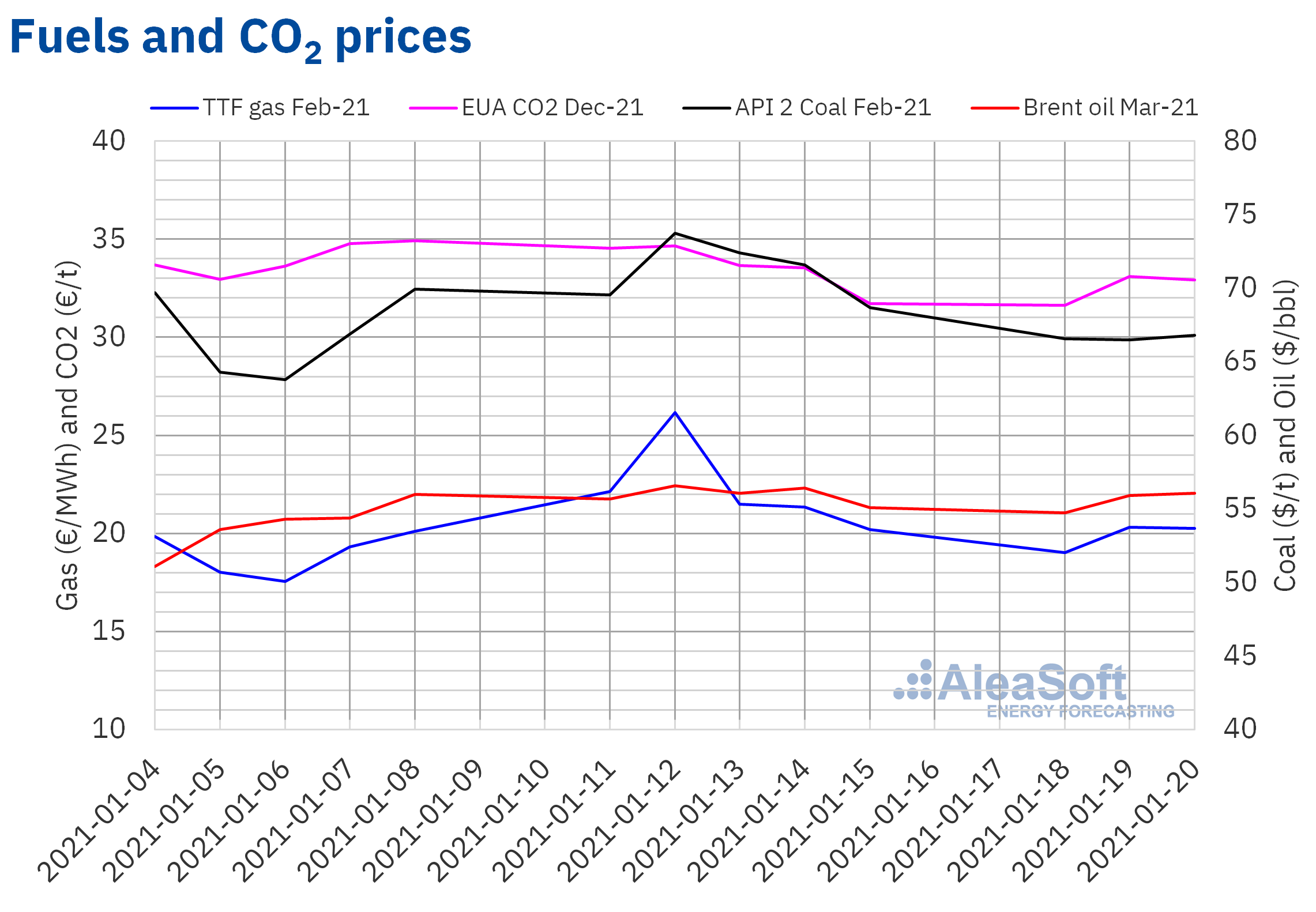 On January 14, the second part of the series of webinars “Prospects for the energy markets in Europe from 2021” organised at AleaSoft was held, in which there was the participation of speakers from PwC Spain, who analysed the PPA market from the point of view of the consumers. The recording of the webinar can be requested at this link or writing to webinar@aleasoft.com. The third and fourth parts of this series of webinars will be held on February 18 and March 18 with the participation of guest speakers from Engie and EY (Ernst & Young), respectively.

At AleaSoft, workshops on various topics related to the electricity sector are also being organised. The next one will be held on February 4 to show the Alea Energy Database (AleaApp) developed by AleaSoft for the compilation, visualisation and analysis of data related to the energy markets. Later, on February 11, a workshop to show to the agents operating in the spot and futures electricity markets how to take full advantage of the mid‑term market prices forecasting and stochasticity will be held.

The long‑term forecasting of the electricity markets are another tool that allows analysing the prospects from 2021. At AleaSoft, new complementary services associated with the report of long‑term prices curves are being offered to advise on their use.